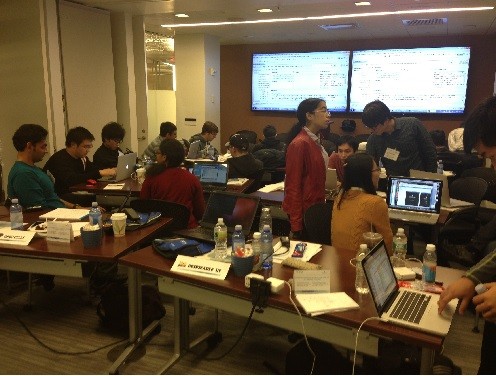 Teams working on their projects at the Juniper-Comcast Hackathon | Juniper

Software-defined networking (SDN) was the subject of a unique hackathon held at Juniper OpenLab (Bridgewater) in November, 2013.

Juniper and Comcast (Philadelphia) had invited teams from New Jersey, New York and Pennsylvania colleges to participate in a workshop Nov. 1-2, and competition, which included an education component and a critical networking challenge.

Six teams from four colleges learned about SDN, Juniper’s programmable networking platforms and functions and Comcast’s SDN perspective and plans. They then worked on a relevant application exercise for a week and came back for judging Nov. 8, 2013.

According to David Nicklas, Comcast senior director of network platform architecture, and Jerry Passione, Juniper OpenLab general manager, the winning team not only had the technical networking know-how, it was able to communicate its concept to the judges.

“They had the most complete and well-balanced view between the business components and technology components and … were able to clearly articulate their solution,” Nicklas explained. “They were able to get very granular with network performance statistics and how different types of applications could take advantage of network resources at different times,” he added.

Said Nicklas, “The hackathon was a great way to build a bridge with the university community around technology innovation.”

He added that Comcast is “embracing new technologies, especially Internet working technologies, at a rapid pace, and we want to get the message out.”

Said Jerry Passione, “Juniper also sees this as a way to build tighter alliances with academic institutions” and provide a real-world point of view. “That’s been a vital focus of what we’ve wanted to do with OpenLab since the beginning,” he said.

However, he noted, “we also see it as an opportunity to supplement what the schools are doing in the classroom. The students appreciated the opportunity to sink their teeth into something substantial with the problem statement and the application exercise that we gave them.”

Both companies were so pleased with the outcome of the event that they agreed to cooperate on further hackathons. The next one is expected to take place in Massachusetts and could include remote participation from New Jersey colleges.

The first day of the event was intended to establish the context in terms of SDN, Passione said. Students learned about current trends in the SDN industry and gained Comcast’s perspective on how that industry’s trends will be applied to network architecture and the services the cable company will deliver in the future.

The second day was used to prepare for the application development exercise, said Passione. Students were trained in the platform they were going to work on. They were also provided detailed information on the problem statement and the network configuration they would be working with and instructions on how to access the Juniper OpenLab infrastructure.

“Essentially, by the end of the second day they had everything they needed to do the work,” Passione said.

Comcast engineers validated how the problem statement would operate in the laboratory setting and created the networking model to support it. “We were very much engaged in defining the problem,” Nicklas noted. “We wanted it to be as industry-relevant as we could make it so the students had a true business sense around the problem statement.”

The sponsors held back a bit on what they assigned the teams. “We were going to introduce a business-oriented challenge at the end to see if what they had built could be flexed into a new capability or a new application quickly. It turned out we didn’t really take that one out,” said Niklas, since the teams didn’t have time to do it. “That we could create a challenge sophisticated enough to really cause these folks to think was really neat,” he added.

The problem involved students building an SDN controller to direct the Junos Space network-management platform to monitor and dynamically reconfigure paths for application traffic optimization. Teams created a view of the network topology and client/serving infrastructure and developed a mechanism for evaluating and trending performance statistics and bandwidth. In addition, they created a controller to leverage the best-performing capacity/segment for the traffic to a destination.

The students also had to introduce variable traffic conditions, and the controller they built had to be able to reconfigure the flow so it would leverage the best unused capacity at all times without affecting performance. They were set against a large, multinode OpenLab configuration. Traffic-generation tools simulated network traffic congestion, forcing them to reroute traffic over alternate paths. They also had to consider a wide range of parameters, such as application performance requirements, alternate path latency and the number of hops.

Will you download Murphy's COVID app? If so, why? If so, why not? COVID Alert NJ App https://buff.ly/30qfxPJ

Our 2020 Annual Meeting may look different this year, but we've rolled with the punches & are excited to still be able to throw a great event. Here's some behind-the-scenes pics of our practice today... looking forward to hosting our guests virtually (& some in-person) tomorrow!