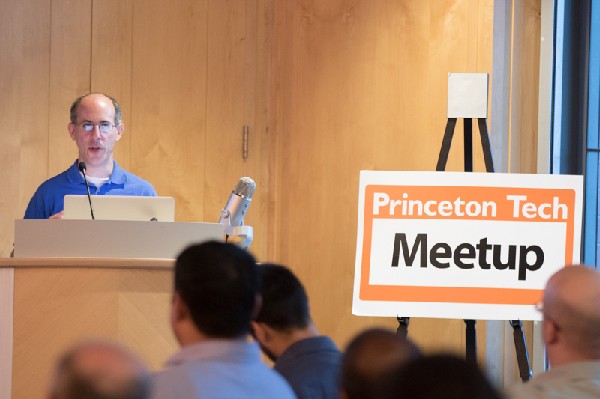 Computer historian Evan Koblentz told entrepreneurs at the Princeton Tech Meetup on May 13 how they could use history to their advantage. His talk, titled “The Prehistory of Portable Computing,” took place at the Princeton Public Library and detailed the evolution of mobile computers.

Koblentz, a tech journalist who runs a group called the Mid-Atlantic Retro Computing Hobbyists, spoke to a crowd of about 60 techies, entrepreneurs, sponsors and children (who were encouraged to attend the educational event). Koblentz  noted that he was writing a book called “Abacus to Smartphone,” and that was running a crowdfunding campaign to fund it.

During the presentation’s question-and-answer session, NJTechWeekly.com asked Koblentz how entrepreneurs could benefit from understanding the history of technological evolution. His reply included some valuable advice.

Koblentz added that, “twenty years later, they invented cloud computing, in which you use a remote terminal to use a piece of a computer somewhere else.”

This demonstrates that old ideas can be used in new ways. During Koblentz’ presentation, he explained that the popular 1976 Apple-1 wasn’t successful because it used new technology — it just repurposed existing technology. “The Apple-1 was nothing special,” he said.

He explained that other single-board computers like the KIM-1 performed the same functions. However, most of those computers used hexadecimal keyboards and LED displays. Steve Wozniak intended the Apple-1 to use an ASCII keyboard and RCA video output instead.

Computers that used ASCII keyboards and RCA output “already existed,” Koblentz explained, “but in $20,000 machines from HP and IBM . What [Wozniak created] was a hobbyist’s single-board computer priced in an enterprise-style package. That was the innovation. He didn’t invent anything new per se.”

Koblentz also talked about the 1981 Husky, which he considers to be the first true laptop computer. He explained that the Husky traced its lineage back to two kinds of popular products — handheld calculators and “suitcase” style computers like the Osborne 1. Koblentz referred to them as “suitcase” computers because “the keyboard would fold up onto itself, so it’s like carrying around a suitcase.” Although commercially available and portable, “suitcase” computers still had to rely on external power sources.

The result was the Husky, a computer that could run on battery power and that had an LCD screen, like a calculator.

In summary, Koblentz advised the entrepreneurs at the meeting to “think about the historical context before marketing people say something’s new. And for the engineers and the business people behind inventions, take a look at what happened before, and what worked and what didn’t work.”

He added that entrepreneurs shouldn’t just look at recent history. “Look at the last 50 years and see what … has been done before because, just like Hollywood, there’s very little that’s new.”

Koblentz also encouraged people to visit the Mid-Atlantic Retro Computing Hobbyists’ exhibit at the Information Age Learning Center (InfoAge), in Wall. “We do everything, from ENIAC to Apple and everything in between,” he said. “And we have things that you could never, ever get on your own, so it’s pretty cool.”

In addition, Koblentz said that InfoAge has “Marconi-era exhibits run by the museum itself. And then there’s about a dozen or so wings, each run by separate groups like mine. So there’s a radio and TV history organization, a ham radio station, there is a shipwreck history group, there’s a makerspace called the Institute for Exploratory Research” (IXR), and even a military vehicles group.