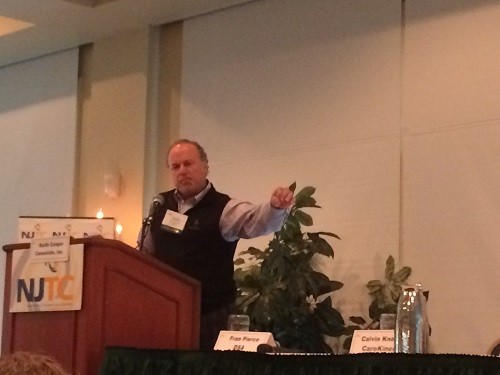 Cooper, a Boston native, said he is at the end of his two-year assignment with Connotate, during which he helped the company to pivot.

In fact, his talk concerned the joys and heartaches of pivoting. Cooper knows what he is talking about. He has taken three companies to successful exits using pivoting as a way to change their business models.

Connotate’s technology was developed more than a decade ago in the Computer Science department at Rutgers University, Cooper said, adding, “Our mission is to make the Internet — and there are more than one billion websites out there today — into your own proprietary database.” The company, he said, is scaling to become a major player in big data.

Opening his talk, Cooper said every business he’s been a part of has had to pivot. “The only thing I am truly certain of … is that the [business plan] is not going to happen,” he noted.

The sands are always shifting in the business world, Cooper said. Ideas change and evolve, markets shift in ways you can’t anticipate and competition appears in ways you thought would never happen, he said. “You can’t plan for this sort of thing,” he stated.

Using stories from his past, Cooper recalled several instances in which pivoting had helped save the company.

After he left Harvard Business School and worked at Boston Consulting Group advising telecoms, Cooper joined a Boston affinity marketing company for credit cards. It wanted to diversify beyond the credit card business. Telecom regulators had just said the major carriers had to rent their networks to others if they signed a volume purchase agreement.

“We started a company called Long Distance for Less,” Cooper recalled. The telecom carriers were charging customers 25 cents per minute to make a long distance call, and this new company was going to charge 17 cents per minute, resulting in a 30 percent margin, he said.

“We started selling, but the 17-cent minute died … our competition was even selling below our cost at Sprint, and I had signed up for a four-year deal at a fixed price,” he said.

“We went from direct sales to group sales. Unfortunately, these are different people. We had to downsize to go after this market.” Moreover, the company went from selling on price to selling on benefits, as the groups got a piece of the action and end users were told they could “help the world” by signing up.

“This was a dramatic shift for a company that was selling on price,” said Cooper. The firm went from zero in revenue to $50 million after four years, eventually growing into a $100 million business.

“If we hadn’t stood at that pivot point and made some of those hard decisions — and that included reducing our staff and preserving our cash — we never could have been able to make it happen,” he said.

Cooper’s second pivot was with the company FaxNet (Boston), which was attempting to be a small business’s fax line provider during the days when faxing was a common way to communicate. When that model began to change, the company pivoted, selling  a white-label product to big telecom carriers who could offer it to their customers as an add-on.

Cooper said, “We moved from telesales to small businesses to telco sales. Everyone knows that if you are calling on a large telco and doing a $20 million sale, you’d better have [on] a nice suit. We had to downsize to get ready for this new opportunity.

“The results for this particular business were [that] we won the category because we held hands with the telcos. We sold it for more than $200 million after four years,” he said.

There was a point during the pivot, said Cooper, “where I was freaking out … My mother invested in this company, and you don’t want to lose your mom’s money.”

One of Cooper’s big successes was in helping Carbonite (Boston) — whose original plan was to back up photos for a specific amount of money per gigabyte — to pivot. When the iPhone appeared, the company had to pivot.

“We said, ‘Let’s back up anything automatically on any device and give you access wherever you are’ … That was a huge difference in technology, approach, sales and service and in cost structure,” Cooper said.

“I had to unsign partners,” he noted, which was a big deal. “We went  from selling on features to selling on fear,” he said. The company also started to build trust through affiliations with known brand spokespeople like Howard Stern and Rush Limbaugh.

Cooper said he had needed to have a difficult conversation with investors as well, because the company’s founders needed more money to make the change. The Carbonite IPO happened on Nasdaq in 2011.

Connotate is now in the midst of a pivot, Cooper said. Though the company’s data extraction technology is “cool,” customers just want the end data, he said; they don’t want to use the technology to extract the data. “About half of our customers today want that business model. We’ve been pivoting towards that model. What’s the next step?” he wondered aloud. “This is a work in progress.”