Home » News » Cook Talks about His Evolution as a Founder, Apps and Company Culture at Princeton Tech Meetup 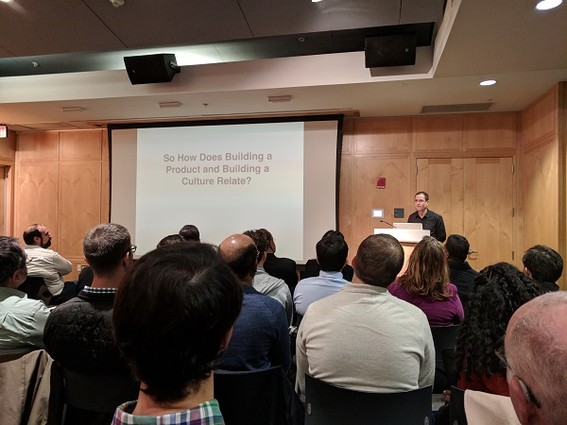 On November 16, members of the Princeton Tech Meetup, one of the largest meetup groups in New Jersey, gathered at the Princeton Public Library to hear keynote speaker Geoff Cook, the cofounder and CEO of  The Meet Group (New Hope, Pa.), a publicly traded company.

The room was packed with tech professionals, entrepreneurs, creatives and service providers, all there to hear about Cook’s experiences in the consumer-facing mobile product market, as well as his advice on building a healthy and sustainable company culture.

To kick things off, Cook briefly read the poem “Widening Circles,” by Rainer Maria Rilke, to the group. He considered two lines in particular to be the foundation of his presentation that night: “I live my life in widening circles, that reach out across the world.”

Cook described the story of how he got to where he is today as a combination of “luck and bold brashness.”  It all started in his Harvard dorm room when he decided to begin editing and writing college essays for money.  His website, “CollegeGate” (later known as “EssayEdge”), made him $10,000 in his first year, and a surprising $40,000 in his second.

In an attempt to gain press, Cook spread a rumor that he would be dropping out of Harvard in order to pursue this business. Though he didn’t end up dropping out, the attention this story drew lead to a number of articles and interviews. The business quickly grew to $300,000 per year.

Soon, WIRED magazine asked Cook to write an article about his success. This article, in particular, would be a key accelerator that his entrepreneurial career needed. Instead of simply writing about being a “dorm room entrepreneur,” Cook took the more controversial (and hopefully more attention-getting) route of harshly criticizing Harvard for its archaic rules that didn’t allow students to run businesses out of their dorm rooms.

After the WIRED article was published, Cook received significant attention, was able to get a $750,000 investment deal, and soon gained even more investment money for future projects. Though the business grew to $5 million in revenue over the years, Cook was soon onto his next big project, myYearbook.

myYearbook stemmed from an idea his sister, Catherine Cook, had of putting yearbooks online. The site launched in 2005, and was in some ways intended to compete with sites like Myspace. This business was a learning experience for Cook, especially in how to make money and gain users efficiently.

One of myYearbook’s most successful methods for user growth was through the acquisition of a quiz website (popular with Myspace users at the time), which Cook then used to integrate a myYearbook signup form. Within nine months of implementing this practice, myYearbook was larger than Tagged, hi5, and Friendster.

In 2011, Cook sold myYearbook for a $100 million cash and stock deal to Quepasa.  He continued to own stock and to maintain an emotional attachment to the business, and ended up retaking control in just a little over a year. In June 2012, the company rebranded itself as “MeetMe,” and started on its path to becoming a community-oriented, messaging-based app that brings users together.

Just this year, MeetMe was rebranded as “The Meet Group,” a company that now houses five chat-based apps: MeetMe, LOVOO, Skout, Tagged and hi5.  The Meet Group is aimed at connecting users, and while it has been significantly reliant on message-based chats, the company has been testing more video and live-streaming features and incorporating them into its products.

The company has also begun looking into profit-sharing models with video streamers. Every day, 4.5 million users log onto The Meet Group apps, over 74 million chat messages are sent, and over 190,000 new users are acquired, Cook said. Showing some charts, he noted that profitability is on the rise. Business income before interest, taxes, depreciation and amortization is around $29 million to $30 million. Cook admitted that the company had been struggling to achieve a solid stock price. “Two out of three charts ain’t bad,” he said.

In efforts to improve this situation, The Meet Group has been working to increase its revenues from non-advertising sources, as well as push innovation through existing product add-ons (such as with live streaming) and new potential acquisitions.

On the topic of company culture, Cook said that much of his progress with MeetMe and The Meet Group could be attributed to the culture that he had helped to create. “Culture can sustain your product or destroy it,” he stated, pointing out that “culture is its own thing, and everything else is part of it.” Basically, it’s going to be the core of your business, whether you like it or not; if it isn’t “right,” it will bring your business down in the end, he implied.

Given that 80 percent of company culture is said to reflect the personalities of the founders or key leaders, Cook made it clear that, especially in the consumer-facing mobile products industry, the leadership must have an innovative mindset. He also stressed that the leadership must be user-centric in their values and in how they measure success.

At The Meet Group, other key components of the company culture include a genuine concern for its users and the team, plus an emphasis on revenue, profitability, and grit. The employees re-evaluate the product often, only focusing on process as far as it helps deliver the product . And in the end, the company “executes toward hope,” Cook said.  He then shared a quote from Maimonides: “Hope is the belief in the plausibility of the possible as opposed to the necessity of the probable.”

After the presentation, the attendees were invited to come up to the front of the room and give 30-second pitches about their businesses to the crowd.