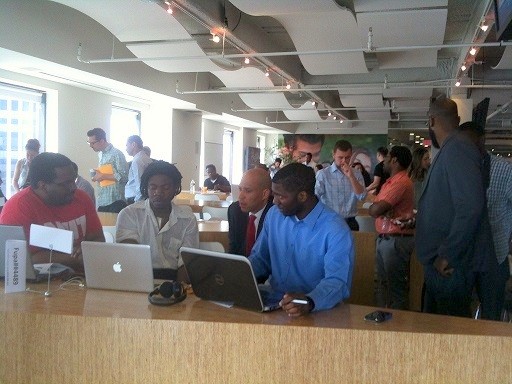 Cory Booker listens to the presentation by the team that won HackNWK for creativity, Green Story. | Esther Surden

What was one of the first things Newark Mayor Cory Booker did after he announced, on June 8, 2013, that he was running in the October special election for Senate?

He showed up at Audible (Newark) headquarters to help out at #HackNWK, a hackathon to redesign the city of Newark’s website that began virtually on June 1, 2013, the National Day of Civic Hacking, and culminated in a daylong event on June 9, 2013.

At 10:30 a.m., Booker spoke to the 50 or so programmers, designers, judges and observers attending, then went from table to table as the participants explained their innovative concepts to him. He was dubbed “chief usability tester.”

About 10 teams competed for the $30,000 opportunity to turn the city’s website into a more open one that will incorporate social media and feedback, and connect users to not only Newark’s services but its businesses.

The brochure for the event says Newark is built on innovation and that its new website will have the potential to “connect us all while making the city more efficient and responsive.”

Booker, who was introduced by Kat Calvin, chief executive of Washington-based Blerdology, made the case that the participants were on the front lines of a revolution that will change government. So many other sectors of our society are moving at the “speed of technology,” but government is not, he stated.

Booker said he wants to be part of reimagining the platform that government uses to reach its citizens, and that this is what #HackNWK is about: “Every city, every county, every state around the country has a website … Can we reimagine that platform? Can we reinvent it and bring it into not the 21st century, because marking things by centuries is not what we should be doing — [we] should be marking them by seconds and minutes.”

Booker added that he sees the city’s central portal as a place where the thousands of people who go there each year are empowered. “It should call on them to be leaders as well, to participate and engage and be a part of their community in a more substantive way … I’m excited at the idea of hacking our website and hacking local government … in a way that is righteous and … will make lives better for every single person” in Newark, he said.

Winning the Most Creative  award was Green Story, a three-person team from design company Green Stories (Montclair). The team included principal Tom Reynolds, a Newark native and graduate of the NJIT New Jersey School of Architecture; senior vice president Donovan Holtz, who has a degree in mechanical engineering technology from NJIT; and vice president of digital media Jordan Baker-Caldwell,  who has received a Bachelor of Fine Arts from Alfred University and lives and works in New York.

Asked why he thought his team had received the Most Creative award, Reynolds replied, “I believe … we took visual cues from the new Newark logo. The green, red, yellow and purple strokes really speak a lot about the diversity of the city, the commingling of the community, the vibrancy of Newark. We wanted that vigor to come through in our design, the color choices and more. Visual cues help guide you through the menus, sections and site in a way that reflects back to the new logo … We also spoke about future partnerships and growth; how do we grow the site in line with Newark’s master plan, which calls for 50,000 new residents by 2025?”

Winning in the Easiest Usability category was the two-person team of Vajaah Parker — a West Orange native who is part of The Web Development Group, a socially conscious Web design and development firm in Alexandria, Va. — and Derrick Phillip, a Newark-based programmer. The two met at #blackhack Newark in April 2013, covered here.

Parker told NJTechWeekly.com, “I think that the judges saw how intentional we were about thinking through the functionality and integration of core features like search and updates. Our prototype was built on WordPress, and I think that the judges valued the ease of maintenance and extendibility that the open-source platform would bring to city workers.” She added, “Being able to present a prototype from my MacBook, face to face with Cory Booker, for the city of Newark was borderline magical.”

After presenting their prototypes to the mayor, the judges and others in the morning, the participants used the rest of the day to make changes and enhance their websites. At 3 p.m., presentations to the judges began. They included James Allen, director of communications for Mayor Booker; Lyneir Richardson, CEO of Brick City Development Corp.; David Reid, senior director of user experience at Audible; Anthony Frasier, BrickCity Tech Meetup organizer and partner at The Phat Startup (New York); Danny Chapman of DucStudio (Rhode Island); and Scott Roberts, described as a “bad-guy catcher” at GitHub (San Francisco).

According to Alex Bryden of Brick City Development Corp., the winner of the hackathon — the group that will get to do the redesign and receive the $30,000 prize — will be determined before the end of June. “The judges will continue to discuss [it], and we will be talking further with some of the teams about their vision and capabilities before we decide,” he said.