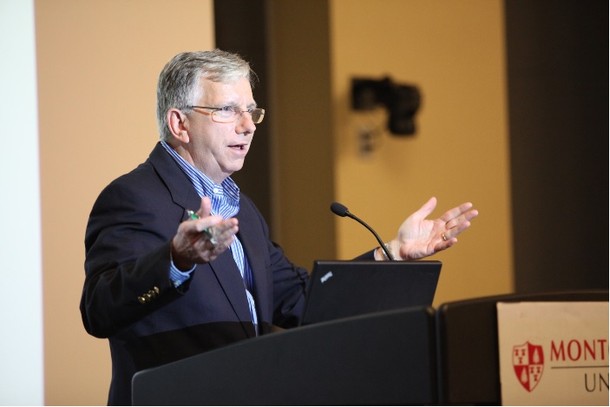 NJTechWeekly.com recently caught up with Dennis Bone, former president and CEO of Verizon New Jersey, who now heads the new Feliciano Center for Entrepreneurship at Montclair State University (Montclair). The Feliciano Center is funded by a $1 million grant from entrepreneurs Mimi and Edwin Feliciano, who have been involved with Montclair State for years, and Edwin is a graduate.

Bone told us he had accepted the challenge to start an entrepreneurial center from scratch after the idea was proposed to him by Montclair State President Susan Cole. Cole mentioned it soon after his retirement was made public. While Bone didn’t want to jump at the first project offered him, he was intrigued by the idea. He began to research existing entrepreneurship programs and facilities around the country to understand their philosophies, orientations and cultures. A few months later, he formally accepted the position.

Clearly Montclair State isn’t Stanford (Stanford, Calif.), Caltech (Pasadena, Calif.) or MIT (Cambridge, Mass.), where most of the innovation appears to occur in the technology or engineering sector, he said.

The university doesn’t have an engineering school, although it does have a lot going on in physics, life sciences and biology, including partnerships with N.J. pharmaceutical companies.The school has a lot of good math students and faculty and many coders, Bone noted, adding, “We also have a design center with 3-D printers” and a college of the arts with many creative students.

One of the first offerings from the center will be certificate program in entrepreneurship. The first course being offered is “The Entrepreneurial Mindset and Innovation.”

While the entrepreneurship  program isn’t expected to create many tech companies, (Bone expects a wide range of projects to be developed because the students are a diverse bunch), all of the student projects in the program will be infused with tech, Bone said. “I don’t see any venture immune from reaching customers on wireless platforms and on the cloud. We are going to need tech partners as part of our ecosystem.”

Bone is attempting to create a diverse  program with student teams made up of multiple disciplines and a student body that reflects the makeup of the campus. Some 60 percent of Montclair State’s student population are women and, he added, “We want the center to reflect that,” noting that he had recruited several female business leaders to sit on the center’s entrepreneurship advisory board which is still being formed.

They include Ilene Wachs, president of  Horizon Casualty Services, Inc., who started the wholly-owned subsidiary of Horizon Blue Cross Blue Shield of New Jersey from scratch, and Liz Hogan, a financial services executive. Mimi Feliciano, founder and CEO of FEM Real Estate, also sits on the board.  The lone male, so far, is Daryl Bryant, a Montclair State alumnus who started the crowdfunding portal StartupValley (Saddle Brook) and Hudson Horizons, an integrated web agency. Bone said Bryant is building a private portal to promote and possibly raise funds for the companies the center will spawn.

Bone noted that while there is no entrepreneurial ecosystem now on campus, in a 10-mile radius of the school there are “tremendous assets,” including TechLaunch, the New Jersey accelerator located in Clifton on land owned by Montclair State.

Learning how to be an entrepreneur will benefit all members of the university community, Bone said, from the arts student to the sociology major. “A student might not use that training now,” he said, “but every student can benefit by learning how to test their ideas and how to pivot.” You can be a humanities major working at a nonprofit, for example, and you will be able to figure out how the organization’s business model failed or needs to change, he said.

To ensure the Feliciano Center succeeds, Bone is recruiting volunteers to help develop an ecosystem around entrepreneurship and give the students the guidance they need. The center will, of course, be drawing on the rich resources at Montclair State, which include one professor who is a search engine optimization (SEO) expert and another who is involved in social media.

The university has chosen to use the Ice House Entrepreneurship Program as part of its curriculum for the fall course, which Bone said Montclair’s students would relate well to. Part of the first course will be taught by a creativity professor who will help them look at the world differently. Students will be taught during a weekly two-and -a half hour block of time in the fall and then a five-hour block in the spring because research says that is best for project-oriented learning.

During the first class, the students will pitch, pivot and pitch again to a friendly panel of judges. For the second class, the students will take a deeper dive into entrepreneurship, working on a project from the first class or selecting their own project if they can recruit a team that wants to do it. They will also create a business model for their product during the second class.

The third class will be “all about the pitch,” said Bone. The creativity professor will critique the students’ pitches, a panel of judges will critique the pitches, and awards will be given. Bone said the Feliciano Center is trying to raise seed money to provide the teams so they will be able to hire a coder or obtain a model made by a 3-D printer, for example.

As the Feliciano Center and its programming develops, Montclair State expects to offer a minor in entrepreneurship for all majors and a major in the subject at its business school.

Bone is now is working on increasing awareness of the program at the university. He has been meeting with the deans of all the schools, explaining how the program will benefit their students. Sharon Waters, a former NJBIZ editor who is the program’s inaugural manager, is spreading the word about it among Montclair State students and faculty.

This first iteration of the certificate program will enroll 35 students, Waters said in an email updating us on the program’s progress. Currently, 30 students are enrolled with another five pre-approved for the course. Slightly half of the class is women. The largest group does come from the School of Business, but other majors represented include psychology, English, anthropology, math, information technology, chemistry, communications and graphic design, she said.

Bone is already meeting with future investors, especially Montclair State alumni who are successful entrepreneurs themselves. He says he knows the university has plentiful resources and he intends to reach out to find them.