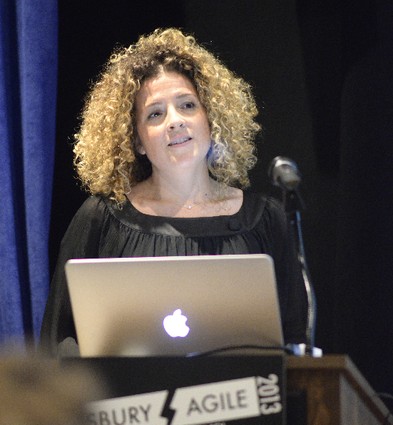 NJTechWeekly.com stopped by the daylong Asbury Agile conference, held in Asbury Park on Oct. 2, 2013. We were happy to see that an enthusiastic group of developers had packed the venue.

We covered the early part of the conference here. In this story we’ll discuss additional presentations.

In a lightening talk, Carponents founder Robin Bhattacharyya, who is based at Cowerks, pitched his fledgling automobile website for car enthusiasts, vehicle owners and drivers.

The site includes entertaining content and a social networking component so enthusiasts can interact with one other. Automotive businesses can also submit information to the site. The company launched an updated platform in September.

How does Carponents differ from competing sites? With the competition, said Bhattacharyya, “you have to go to separate websites for all the car information you need. We want Carponents to be a hub for automotive information.”

Attendees were treated to a humorous talk by Tim Holman, a developer at Wieden+Kennedy, a New York interactive agency. Holman noted that while he may have sold his soul to advertising, he has a lot of leeway to create small projects. “Everyone can start a side project. There are so many small outlets that unleash creativity,” he said.

Holman provided many examples of side projects from the Web, Instagram, YouTube, Twitter, Tumbler and more that he and others have taken on. “Any place on the Web is good for this,” he noted. For example, one of his recent side projects takes people to useless websites. Why do people do this? Holman’s theory: “Everyone has an itch to create something … to make people smile … and to satisfy curiosity.”

Ari Rabban, CEO of Phone.com (Newark), took to the stage to tell how his company got its start. He was incubating businesses, he said, and decided to find out who owned the name of one he wanted to start, Phone.com. He met with the domain name owner’s representatives, who told him the owner wanted to do something with the domain name rather than just selling it.

Rabban had the idea for the business — a phone business for startups, entrepreneurs and very small businesses — and he and the others teamed up. “That was seven years ago. I set up shop in New Jersey with a call center, and a data center in San Diego,” he said.

Phone.com is about to embark on a new project: the startup is coming out with an application programming interface (API). Rabban said the entire platform “will be open for developers to build application services that link to our services. You can create your own stuff and market to our customers on our website … . That is going to be starting new in the beginning of 2014,” he told the group.

Sandeep Chand, director of R&D for iCIMS, provided a serious reality check for those who think agile development is a panacea. Using agile software development with software as a service (SaaS) implementations can sometimes work, he said. On the plus side, agile encourages “quick turnaround and quick validation. The odds of failure decrease.” It also prevents overengineering, he said.

Agile development cannot be used under all circumstances, however, Chand said. ICIMS has 1,500 clients, and “in an ideal agile way you want to push out as many releases as possible,” he noted. However, there is a limit to what the client may be willing to accept, so you have to balance driving innovation with disrupting customers, he said, adding, “It’s critical to look out for the customer.”

Also, while agile development encourages thinking in very small chunks, there are big concepts a software company may want to take on. It’s more challenging to use agile development to think about how to handle bigger issues overall, Chand noted.

“Inherently, agile has a lot of waste built into it. There is a lot of refactoring, a lot of tech work that gets done over,” Chand added.

Moreover, it’s harder to use an agile development approach in certain industries, such as pharmaceuticals, healthcare and insurance. “They are behemoths with everything set in a regulatory manner, and the first version has to encompass everything,” said Chand.

Next up was independent interactive User Experience (UX) designer Sarah Doody, who told the group that in the same way people can get lost in a good book, they can get lost in an amazing product. “Today’s marketplace is really crowded. The solution to standing out is to start with establishing a really good story,” she said.

Often teams focus on execution before they define their value proposition, Doody said. They should not only focus on the hows and whats of their products but also on the whys — the “solution story.” “Good products,” she said, “give you a promise that they will lead you somewhere that is worth your time.”