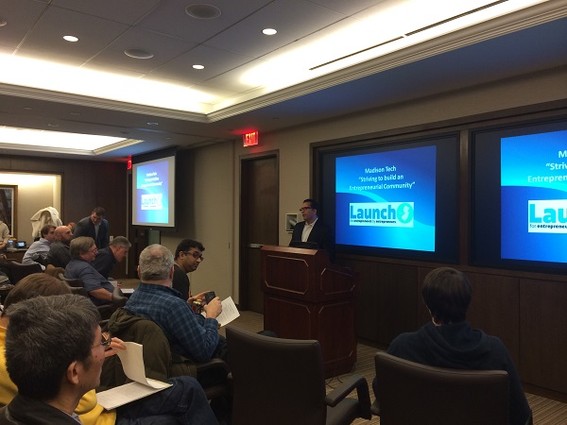 [Carlos Abad is the founder/co-organizer of The Madison Tech Meetup and an associate with Fairfield-based Financial Principles.]

Recently Madison Tech Meetup held a meeting called “Inside the Mind of a Serial Entrpreneur” that featured a discussion led by Scott Barnett, a serial entrepreneur whose new startup is Bizyhood.

Halfway into the meeting, a deep discussion got underway on the difficulty of getting developers to join New Jersey startups. The participants included Barnett; David Klappholz, a professor at Stevens Institute of Technology (Hoboken); Jason Graves, a senior Web app developer, the founder of North Jersey Code Junkies and a Madison Tech Meetup co-organizer; and Eric Korb, a serial entrepreneur who founded Accreditrust, and others.

The problem these attendees discussed seems especially pronounced when it comes to attracting technologists who graduate from New Jersey higher-education institutions. Opinions varied as to the reason for it, but nearly all the participants agreed that the problem exists.

Solid developers who want to join startups automatically look to California, New York and other entrepreneurial hubs. They don’t think of New Jersey because they don’t know about the state’s entrepreneurial activity, or they think our startups are too green, our entrepreneurs too inexperienced.

If you plan to launch a startup that is tech-intensive, this will be a problem for you!

You can always hire a company (we have plenty of those), but the product you receive will be more like a suit bought off the rack than one that is custom-made. On rare occasion you will find one that fits perfectly, but in most instances it will look “off” if it isn’t tailored. Startups live in a hypercompetitive world in which little things can mean the difference between success and failure.

As your weight fluctuates, your suit will need to be tailored. In other words, as your company grows and you receive customer feedback, you will have to adapt your business to customer needs. It is both difficult and expensive to make such changes when you hire an outside company to do your development.

There is no quick fix for this problem or for the lack of investors in New Jersey. If a company such as Facebook, Instagram or Snapchat were to  come out of the Garden State, that would quickly increase our visibility. But of course, we can’t plan on that happening.

The best way to get quality developers and investors involved in our companies at this point in time is to increase awareness. We have a lot of smart people with great ideas. Tell friends, family and others about Madison Tech Meetup or any New Jersey group you think is great. Those are seeds that may yield beautiful flowers when you least expect it.

Previous: Motor Vehicle Commission's New Rule May Drive Tesla Out of New Jersey
Next: NJ-Connect Headlines for February Featuring Mack-Cali, Linode, ThinkNum, PowerMat and What are Minds For

230 More posts in Opinion category
Recommended for you