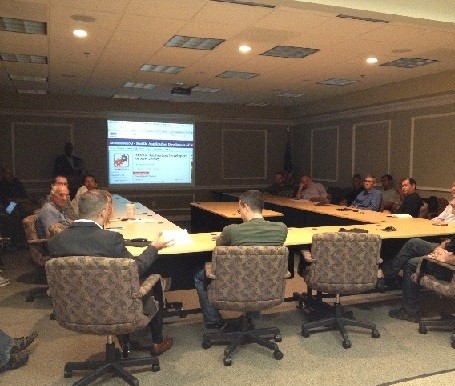 The developer of the next “Angry Birds” may just be honing his or her skills at MobileDevNJ, a mobile app maker meetup that gathers in Hoboken on the second Wednesday of every month, including September 12, 2012.

The group’s founder, Gary Rattray, said the meetup is the largest for N.J. mobile app developers, numbering over 435 members. Rattray, who owns North Plainfield-based software firm Kaliware, said he started the meetup in the fall of 2010 to network with like-minded colleagues.

“I noticed people were doing exactly what I was doing, so I said, ‘Why not start a meetup for people and build a community?’ ” Rattray explained. He now has two co-organizers, Ankur Oberoi, a developer-evangelist at San Francisco-based TokBox, and David Rodriguez, co-owner of and lead developer for Elmwood Park mobile app firm Forge42. Rattray asked them to join him after they had participated heavily in the first few meetings.

The group previously met at the Converge NJ coworking space at  Kean University but after it closed, moved to Hoboken, gathering at the Hoboken Business Center’s coworking space Mission Fifty. Rattray said he wants the group to begin offering classes and different events, such as larger conferences.

Rattray described the meetup as “a matrix of professionals,” including developers, designers, entrepreneurs and freelancers at the beginner, intermediate and advanced levels. “There’s almost a sense of peer pressure,” he said. “You meet people here and hear about what they’re working on, and their progress inspires you.”

One September meetup attendee, Peter Kramer, has been to virtually all the group’s gatherings since its beginnings. Kramer has had an eclectic career that has come full circle, including as a programmer in the early 1970s, then as a physicist, pharmaceutical executive and, now in his retired years, app developer.

Kramer noted that when he started developing again he realized much about computing had significantly changed. He said attending the meetup helped him get back into things. “In the beginning I was naïve, but we figured out where I was looking at things differently,” he explained. In just two years Kramer has developed more than 15 apps, some with as many as 300,000 downloads, including one that projects stock prices, another that digitally punches frequent customer cards and others that are games.

MobileDevNJ meetups begin with an open forum, then feature a guest speaker. For September, members discussed the big news that had broken earlier that day, the Apple iPhone 5 launch. When Rattray asked how many audience members were planning to buy the new model, only six or seven of the 30 people present raised their hands. The September meetup’s guest speaker, Kevin Nickels, spoke about his new company, FatFractal. Nickels is the CEO of the virtual company, which counts core members in San Francisco, Boston, Chicago, London and Scotland. These individuals have been working together for almost two years, but the firm launched publicly only this month.

Nickels explained how FatFractal provides back-end services for developers. “If you want to write a cool app, you need a back end,” he said. “We automate things that are repetitive and make the back end really powerful but easy to use, so when something changes you can take action.”