There are 17 funded startups in Newark, but only three have a founder who’s a woman of color, according to stats from Startup Newark. The digitalundivided (DID) 30-week incubator program, which is open to any woman of color in the city, may help fix that.

Launched in November, Startup Newark maps the city’s high-growth startup ecosystem by providing a snapshot of incubators, accelerators, funding sources and entrepreneurial service organizations. The research for the mapping was led by DID, an organization that works with high-potential Black and Latinx women founders, from the beginning of the startup idea phase right up to the launch.

DID is most known for ProjectDiane, which produces research that delves deeply into the state of Black and Latinx women founders in the United States. According to its ProjectDiane2018 report, a total of 6,791 startups funded in 2017 were led by at least one woman founder ‒ but less than 6 percent of these startups were led by Black or Latinx women.

“There’s a lot of data and studies that show that they are far more successful than other entrepreneurs, and yet they just lack the resources, particularly the capital, in order for them to grow,” said Kimberly Ostrowski, vice president of corporate giving at Prudential Financial (Newark), which sponsored the research. “Focusing on that demographic was important to Prudential, as we were looking to create inclusive opportunities for people to be successful, to create economic success and opportunity, and get to a point where their potential can be realized.”

DID is based in Atlanta, and serves as a pipeline for women of color into innovation-focused entrepreneurship. It has helped over 2,000 founders build 52 companies and raise over $25 million in outside funding for their startups. DID partnered with TechStars in an accelerator program to increase support for women entrepreneurs. In November, at the Startup Newark Symposium, DID announced that it would expand into Newark in the fall of 2019 and into three other cities by the end of 2020. Applications for the flagship 30-week incubator for women of color in Newark are now being accepted. No prior entrepreneurial experience is required.

The ProjectDiane2018 report also revealed that Newark’s startup ecosystem is anchored by higher education institutions, such as Rutgers University-Newark and NJIT. And it noted that driving opportunities in the city’s startup ecosystem will be critical for positioning Newark as an entrepreneurial hub. One of the report’s key recommendations is to create a pathway into high-growth entrepreneurship for Newark residents that would ensure specific and continuous skill building (from ideation onward), preparation for accelerators, and pre-seed investments. Another recommendation is to cultivate opportunities for Newark startups to access early capital, whether from grants or accelerators.

“Newark’s ecosystem is in a newer stage, technology is new in general,” said Kathryn Finney, DID’s founder and managing director. “There’s work to do to build it, there’s work to do to make sure that everyone’s invited and included and everyone knows that they can be a part of it.” Finney lived in Newark’s Central Ward when she was a fashion blogger in the process of building her company.

“This is not just for people who went to Rutgers or NJIT. We have to let Newark residents know that they can also be a part of this, that it’s not for a certain type of person. That takes work,” she said.

When Finney lived in Newark, the city offered her access to New York without the financial strain. Newark was the gem that she didn’t know she needed, she said. According to digitalundivided research, about 50 percent of all Black and Latinx women founders come from the New York/Newark area. For women seeking to tap into an existing network of potential entrepreneurs and mentors, Newark may be the opportune place.

“You have a major airport, train station, a port. You have the fastest internet in the country. Newark has so many great things going for it, there are a lot of opportunities here and I don’t think people recognize it yet,” said Finney. “Hopefully by us coming, we can help shine a light on Newark, a light that already existed before we came, and existed for many years.”

Newark native, entrepreneur and long-time tech ambassador Anthony Frazier was excited when he heard the news of DID’s plan to expand into Newark. DID contacted him to learn what the tech landscape looked like in the city. He believes that there is a lot of creative spirit in Newark, and is pleased with the momentum that he is starting to see.

“Tech is a part of everyone’s lives. It’s no longer this thing reserved for geeks, techies and first adopters. Utilizing that strength will help us move forward,” said Frazier. “We just need more people saying ‘yes’ to Newark. I see Newark being a home for a lot of tech ideas, not just for tech’s sake, but really solving problems and being creative.”

Previous: Hoboken Startup Basis, Which Raised $133 Million, is Shutting Down and Returning Investor Money
Next: What Are the Tech and Clean Tech Companies Receiving Funding through the EDA’s NOL Program? Part One.

175 More posts in Meetings category
Recommended for you 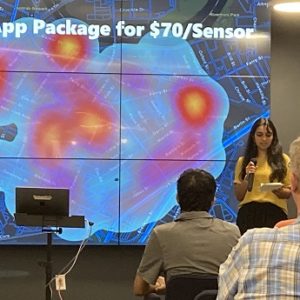