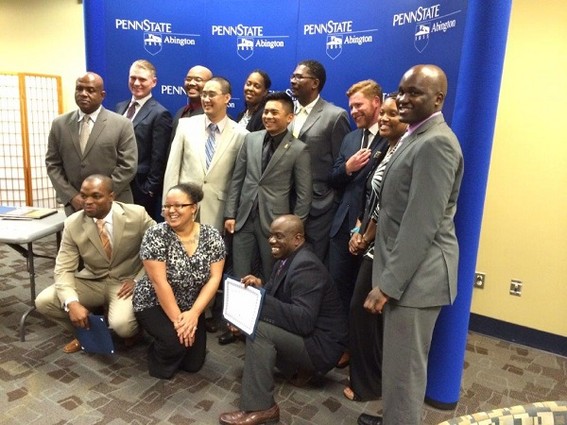 Veterans who graduated from the Merck Nova program
| Courtesy Diversant

It has often been suggested that veterans can make significant contributions to the IT industry. They are hard workers and know how to lead teams, for example. And many of them have an aptitude for technology.

One of the problems is that, while veterans have access to training all the time, they don’t get trained for any specific opportunity.

One company in New Jersey is doing something to attack the 8 to 9 percent unemployment rate among veterans. Since 2011,Diversant, an IT staffing company headquartered in Red Bank, has been partnering with its clients to train and mentor veterans for specific jobs within the client partner companies.

“Our program is very different. We go to the client and say ‘where is the opportunity? And how can we implement this nicely into your corporate culture?’ There have to be multiple opportunities, so we are looking for an organization that has five or more needs in a specific skill set,” said Nicole Cicero, director of national accounts for Diversant.

Veterans have been working out very well for the company, said Diversant CEO Gene Waddy at a recent New Jersey Tech Council Leadership Summit. “Gangs of veterans are coming out of the service, and they are infinitely trainable, loyal and they work well in teams. As long as you provide a vision as a CEO, they will follow you and also take initiative.”

Diversant’s current veterans program, called “Nova,” is being implemented in cooperation with the pharmaceutical company Merck (Kenilworth), one of its client partners. Merck identified a need for more project managers for its various IT initiatives. While this isn’t a hard skill set to find, Merck wanted to recruit veterans for its openings, Cicero said.

“The management-level sponsors at Merck were all from the military, and they felt that a lot of the experiences veterans had in the military could translate to project management. For example, veterans had to be good at leadership and communications in order to survive.” The skills they already had could be parlayed nicely into a projected management position in a corporate setting, she explained.

Some 15 veterans were selected for the Merck opportunity through a process that included a presentation to a panel of judges. One night was designated for the recruits to tell the company why they wanted to be a part of the program. Then the recruits had 36 weeks of training in conjunction with Diversant’s educational partners at Penn State.

“They were able to implement what they were learning in the classroom on the job…and came out of the program with a certificate in project management.”

The Merck program was very successful, Cicero told us, noting that 10 veterans hired by Diversant are now working at Merck. Some of the original 15 participants had left for IT management jobs at other companies, she added. “We don’t want to lose them, but the whole idea of the program is to give them a career path.”

Diversant and Merck continue to support the veterans who have remained on the job. “We’ve been sponsoring them for their associate project management certifications and their project management certifications. I sent some folks for agile methodology coursework, which is helpful in most IT environments today. …We also conduct “lunch and learns” monthly, leveraging the knowledge of the senior folks Diversant has on staff at Merck,” she explained.

Cicero said that, at the end of the day,  the success of the program will depend on continued corporate sponsorship and results that are very process-oriented. “You have to make sure that it is going to be a successful program because it is a small veteran’s community, and veterans talk to each other. You want them to say, ‘I want to come to Diversant because I heard great things about this project and I want to be involved.’”

She added that she’s gotten several emails from veterans who had passed through the program, thanking her for putting them on a career path. “They are really happy, and we’ve added value to their lives,” she said. The company was even nominated for an award by one of the veterans it helped.

Diversant has attracted the interest of other corporations that now want to set up similar programs, she said. One of the areas of interest is training veterans to work with mainframe technology. Most people who know mainframes are reaching retirement, and many young people don’t want to be involved with what they see as yesterday’s technology. However, mainframes are here to stay because they do some big batch jobs better than anything else on the market. So mainframe training would get the veterans into an IT specialty that is growing in demand.

Diversant’s earlier program, called “Star,” came about in 2011. It involved the insurance giant AIG (New York, N.Y.), which wanted to hire low-cost domestic labor in the quality assurance area, instead of outsourcing. The company thought of taking on junior interns, but it had also started an initiative to diversify the workforce.

Star was a natural first step into the world of IT for unemployed veterans with no background in the field, Cicero said, and it provided them a career path. In this case, the veterans trained for three to four weeks. Diversant also had a senior mentor helping the veterans adjust to corporate life and improve their technical skills.

Diversant continues to support veteran initiatives, said Marketing Manager Charlean Parks, who is based in Atlanta. In October and early November, Diversant employees at offices all over the country competed in the Jeans For Troops competition. Employees contributed $5 so they could wear jeans to work on Veterans Day. The office(s) with 100 percent cooperation received a free lunch.