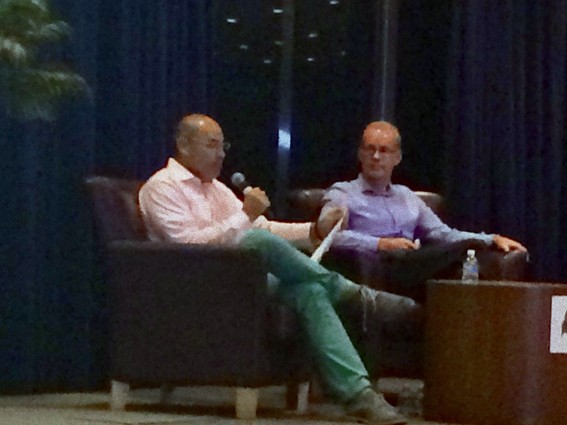 Shortly after Kevin Ryan appeared at the NJ Tech Meetup in Hoboken on Sept. 16, he and his cofounders sold an 88 percent equity stake in Business Insider to Axel Springer for about $343 million.

Ryan is a New York-based entrepreneur who has led multiple successful venture-backed businesses that have had exits. Among his companies are MongoDB, Gilt and DoubleClick, and he’s not finished yet. Ryan offered both observations and advice for the startup founders who attended the meetup.

Join a startup first, before you try to be a CEO. You can learn a lot by coming up through the ranks of a startup or by working at a growing company like Google, he said. “The network you have will be great…everyone gets promoted because the company is growing and they promote the person next to you out of desperation because they are moving so quickly. So I tell people to start with that. It’s better, it’s fun and you’ll move up or at least gain valuable experience.”

Think of your life the way a professional athlete does. “You have a limited shelf life.” These years [of productivity as a startup founder] are extremely valuable, he said. After he sold DoubleClick to Google, Ryan wanted a change. He had three choices. One was to run a large Internet company, but there were no Internet companies in 2005 that he found interesting. He could “do something financially oriented,” like becoming  a VC, but he really liked running things. So he decided to do something that he hadn’t seen anyone else do: run more than one company at the same time. He also wanted to diversify his risk. “What you don’t want to do is spend four or five years on a startup that doesn’t work.”

If you can’t get anyone really great to join your startup, that’s a sign you shouldn’t be doing it. Building the team for the startup is the most important thing, he noted. You have to do a lot of work. “There are thousands of people in the city [New York] who have put money into companies, and if they believe in you and your idea they will give you money. …There’s closer to too much money in this sector than not enough. If you’re not getting funded, you’ve got to figure out why that is.” Maybe your idea isn’t right at this  moment, he said, or maybe you don’t have the right team. “Is your team incredible?” he asked.

In choosing the right employees, everyone overvalues the interview and undervalues the reference checks. When building a team, “you don’t get all of a person’s personality to come out during an interview, but you do get it when you talk to former coworkers. …The important thing is to get multiple people to say the same story. For example, if they are a manager, you want to know that people will work for them. People will leave a company if they don’t like their manager.”

If you have to rely on advertising for your product, then your product is probably not that great. “I’ve launched a lot of different products and I’ve had a bunch that didn’t work. The cold reality is that three months after you launch you can see that people are not that excited about it. Let’s not forget that almost every successful company in the Internet space got there without advertising,” he said.  “Business Insider has never spent one dollar on advertising because the product is great. Gilt got to $100 million in revenue in a year without advertising because people liked it and talked about it. I had a company years ago called ‘ShopWiki’ that was a search engine for shopping. It wasn’t that great and the market told me that.”

Find an idea that is unique and not already out there. “I also have to feel that business-wise I have a good business model, and I have to be intellectually interested in it. That’s another thing I solve for. I don’t sell companies easily, so I’m involved eight or nine years later. You have to think of it as a long-term relationship.”

For a completely different point of view on Ryan’s talk, see this blog post by Bill Hartnett.

You can also watch a YouTube video of the talk.