Home » News » “Do Something Completely Unexpected,” Montclair Entrepreneurs Urged at Meeting on Innovation 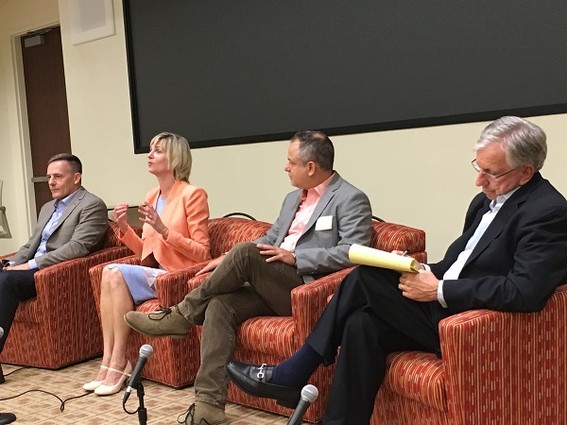 Innovation, even in big companies and massive organizations like the military, can be accomplished with some ingenuity, and the courage to implement programs first and ask forgiveness later.

That was the message from representatives of a startup, a large company, the military and academia at the Montclair Entrepreneurs meetup on Sept. 20. The meeting took place at the Feliciano School of Business, Montclair State University.

As she began telling her story, Powell said she hoped that everyone would walk out of the meeting with at least one idea they had never had before, and that they would take that one idea and do “something completely unexpected with it.”

ADP is the world’s largest provider of outsourced payroll and human-capital-management services, with more than 56,000 employees, over half of them outside the U.S. As can be imagined, ADP is a vast organization focusing on delivering value to shareholders. Yet the company also wants to deliver on innovation, Powell said.

One of the innovative programs the company touts is an internal social site that connects experts in different areas of the business. “We have a social collaboration site that’s like if Facebook had a baby with LinkedIn behind a firewall,” with a business agenda. The site hosts different groups with specific areas of expertise. For example, there is a group of 4,000 people who just talk about career growth and development and share ideas about how to get their next promotion within the company.

“We also started engaging our clients in social platforms to give each other advice.” So, in addition to calling into our service center, clients who have figured out solutions and best practices can help others on this site.

“We also do a kind of ‘skunkworks’ project.” The idea of skunkworks, she said, is to take people out of the line of regular business operations and set them aside to address a particular challenge. “If they were doing their regular day job, they would never want to bend or break the rules. We do this on a small scale.” One example she gave concerned an ADP product for which it takes 10 weeks to set up a client. “We have a skunkworks effort where a few people are trying to figure out how to get that done in one week.”

One of the surprises ADP had with the skunkworks projects was that people still in their day jobs were feeling left out of the culture of innovation, which was the exact opposite of what ADP had intended. “So we created a lot of focus on internal education to share innovative ideas; we are doing a lot of pitch competitions where a person inside the organization will suggest a new idea…and whoever wins the pitch, we turn around and build that product or implement that solution.”

Innovating in the Army

Tony Burgess spoke about his experience in the army. While he had an entrepreneurial bent before he entered West Point, “I fell in love with leading soldiers and building amazing teams” and being part of something bigger than himself.

“What I needed to do was find a way to activate my entrepreneurial side inside this hierarchical structure.” When he was preparing to be a company commander in the army, he spent a lot of time with seasoned company commanders, taking them out to lunch, asking them what went well for them and what were their best ideas.

“So it wasn’t a big leap for me, coming out of my second company command, with a band of brothers who were likeminded in this matter,” to think about creating an online community that would make it possible for all company commanders across the army to share best practices. He provided a site for the “front porch dialog” that company commanders had with each other. And the “curricula, so-to-speak, was their ongoing challenges, the tough experiences they were facing.”

In February 2000, Burgess and friends launched CompanyCommand.com (West Point, N.Y.) with a bottom-line, laser focus on increasing leader effectiveness. “We saw this as a strategic practice in the army,” he said. Every soldier in the army is in a company, and every soldier has a company commander, he explained. And every commissioned officer in the army at some point typically commands a company. “So if we raised the level of effectiveness of company commanders throughout the army, we raised the level of effectiveness of the entire army.”

This was done 100 percent outside of the hierarchical structure of the army, because it needed to be done. “It was really cutting-edge and a little dicey at times” in terms of what they were doing outside of the structure, he said.

For instance, they interviewed company commanders in Iraq and Afghanistan about their most challenging experiences and then disseminated that information through the website.  Burgess said that some of that information saved lives.

Tauber said that Degreed is disrupting and innovating in a different way. The world of work has changed, he noted, and employees now have to keep educating themselves in different ways.

Degreed presents a portal to videos, lectures, massive online courses, podcasts, magazine articles, etc. on various topics; and it provides employees with a way to show that they’ve read the articles or taken the online courses, so they can add their training to their credentials.

“By cataloging and indexing them and making it a social experience, we are able to allow people to find learning experiences that are meaningful to them and make sense for their goals and their careers,” Tauber said.

“The other thing that changed is the contract between companies and employees,” he noted. Companies are quick to get rid of people when they no longer suit their purposes. “I’m not moralizing about this,” he said, but it means that individuals need to own their own careers. On Google, companies talk more about human capital management than they do investment in the workforce, he added.

While the business world has always been changing, it is now changing much faster than ever before, said Bone. Technology is a big part of what’s causing the change. Most of the wireless companies are working on 5G, which has a 50-to-100 times greater throughput than 4G…I don’t have to tell you about what that will mean in terms of disruption in applications.”

Software, artificial intelligence and machine learning are going to “transform business after business; it’s going to transform us.” Even some of the big things that are coming, including driverless cars, will get here and disrupt many businesses, he said.

Business schools should be preparing our students for this world, Bone contended. Corporations have to make decisions much more quickly. They have to be much more empathetic to what’s going on in the environment, and they have to understand the problems they are trying to solve and understand how to solve them. Corporations used to be able to consider ideas for two years before they’d implement them. Now they will be killed by an innovative startup that can implement the idea before them.

Bone said the entrepreneurship program at Montclair State is entirely experiential and gives students problems to solve. “We give them techniques along the way,” like the lean startup approach. “We create an environment where it is OK to experiment and OK to innovate quickly.”

Previous: What's up with internet radio? One NJ station explains the newest media craze
Next: Urgency to Define Rules for Telemedicine in New Jersey