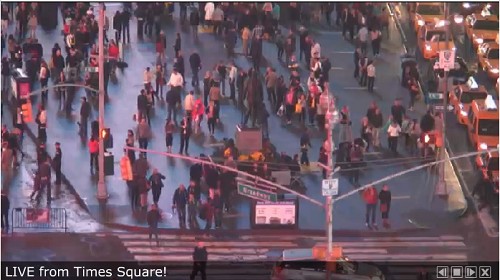 EarthCam is a New Jersey company that places video cameras all over the world. This is a still photo taken from a live video of Times Square on the company’s webpage. New Jersey wants to keep EarthCam here. | EarthCam website

The NJ EDA made several moves in October to keep New Jersey tech companies in the state.

EarthCam (Hackensack) has been approved for both a Business Employment Incentive Program (BEIP) and Business Retention and Relocation Assistance Grant (BRRAG) award by the New Jersey Economic Development Authority (EDA).

EarthCam, which is privately held and growing quickly, provides webcam content, technology and services, delivering millions of images daily and developing technology to manage camera networks all over the world.

The company, it seems, is contemplating a move to a 41,544-square-foot facility in Upper Saddle River or a location in New York. If New Jersey is chosen, the company expects to double its staff, to 160, and invest more than $6 million, the EDA said in a statement.

The EDA board also approved BEIP and BRRAG awards to encourage McGraw-Hill Global Education Holdings to remain and expand its operations in Mercer County. The digital learning company could move to independent, stand-alone space in East Windsor. If it does so, it would create 40 new, high-wage jobs and invest approximately $2.15 million in the economy, the EDA said. The company, however, is also reviewing locations in New York.

The BEIP and BRRAG programs are no longer accepting applications because of an overhaul of the incentive program via the Economic Opportunity Act of 2013, which Governor Christie signed into law in September. However, previous applications will be acted on by the end of December, the EDA said.

The board also approved investments in two emerging technology companies under the new Angel Investor Tax Credit Program. NJTechWeekly.com covered the first angel to invest in a New Jersey company in this article. The Angel Investor Tax Credit Program is a result of legislation Governor Christie signed in January, which took effect July 1. At that time, the New Jersey startup community expressed great hope that it would spur more investment in emerging companies in the state.

Investors John C. Dries and GHO Investors, LLC  (Princeton) applied for tax credits based on their investments of $4.2 million in United Silicon Carbide, a Rutgers University spin-out located in Monmouth Junction, specializing in the development of high-efficiency Silicon Carbide devices and foundry services.

The second company, Princeton Power Systems, is a designer and manufacturer of technology products for energy management, micro-grid operations and electric vehicle charging. The Marshall J. Cohen Family Trust was approved for tax credits for its $550,000 investment in the Lawrenceville Company.

At its September meeting, the EDA approved a limited partnership investment in Milestone Venture Partners IV, up to $1.3 million. The funding is from the State Small Business Initiative Fund. Milestone is a venture capital firm located in New York City, with $90 million under management. We are awaiting information from Milestone about its plans for New Jersey.

Do Good Auto Coalition is driven to help those in need https://buff.ly/31T7quQ