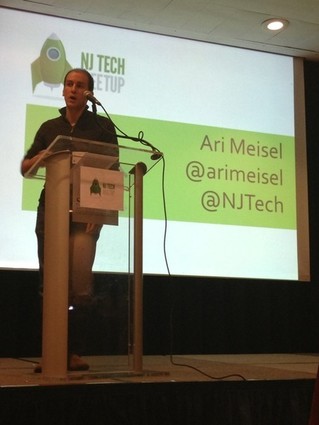 ARCHIVED POST–This week we are reposting some of our best received posts in 2013. This post was first published in March.

At the February 21, 2013, NJ Tech Meetup on the Stevens Institute of Technology (Hoboken) campus, attendees heard pitches from three N.J. startups and were enlightened by an excellent, useful talk by Ari Meisel of LessDoing.com.

Ramos’s appearance further illustrates the political clout the tech startup community–and particularly the NJ Tech Meetup with its more than 2600 members– is beginning to have in N.J.

During his announcements, Price mentioned that the meetup is trying to cultivate its own angel network. He is seeking help to develop the idea, still in its early days.

Presenting the main talk of the evening, Meisel, an efficiency expert extraordinaire, told startup founders — who are notorious for working long days that last into the night — how to use “smart” tools to make time for the more important things in life, such as spending time with their children.

Meisel’s mantra: entrepreneurs can optimize, organize and outsource all tasks in their lives and businesses. He calls his method of working “achievement architecture.”

One of the tools Meisel touted was iDoneThis.com, a journaling app that lets you chronicle your daily achievements and later provides you a digest of them, reminding you of all the good things you did.

Meisel said email users should have only three folders: one for important items, one for optional items and an archive. The Optional folder is “the No. 1 filter you should set up on your email. If an email has the word ‘unsubscribe’ in it, it should be considered optional,” he noted, adding that anything optional is easy to go through and easy to toss.

Meisel believes in the concept of virtual assistants–helpers who can be reached via online sources like Fancyhands.com— to help outsource tasks that take entrepreneurs away from their core priorities. “I recommend that everyone at some point try working with a virtual assistant because it’s an educational process for you in terms of how to delegate effectively,” he explained.

Before the evening ended, Assemblyman Ramos discussed the New Jersey Angel Investor Tax Credit Act, which he had helped sponsor. The program is being administered by the New Jersey Economic Development Authority (EDA) and has a number of provisions that should be mutually beneficial to startups (companies of under 225 employees that do 75 percent of their research or manufacturing business in N.J.) and the angels who fund them. “We want New Jersey to become a leading tech hub in our country. We know how important it is for our economy,” said Ramos.

As chairman of the Regulatory Oversight and Gaming Committee, Ramos said he was also instrumental to the passage of the e-gaming bill Gov. Christie recently signed. “We hope we will become a hub in this area, too,” he remarked.

Prior to Meisel’s talk, three N.J.-based startups pitched their new companies. They will be covered in-depth in an upcoming NJTechWeekly.com story.

Previous: If You Care About User Engagement You Should Care About Gamification, NJTC Members Told*
Next: Hoboken and Stevens to Collaborate on Smart City Technology*