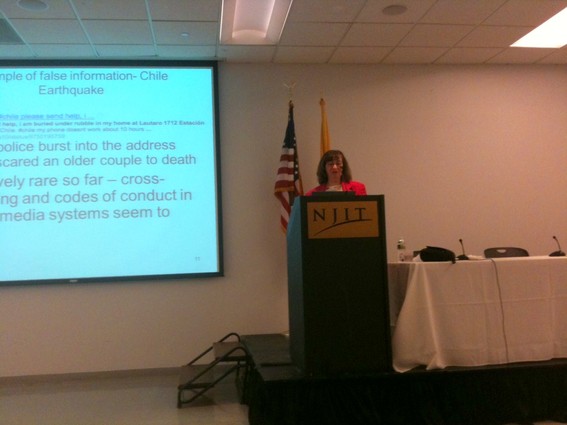 NJTechWeekly.com stopped by the proceedings and caught a timely talk by Starr Roxanne Hiltz, distinguished professor emerita in the school’s information sciences department. She spoke about assessing and improving the trustworthiness of social media for emergency management.

Hiltz based her discussion on both the academic literature on social network trustworthiness and her own research based on interviews with emergency management personnel at the local and state levels.

Emergency managers, she said, use social media to disseminate information and try to use others’ postings to inform their decisions. When they are trying to determine who needs their help the most, however, they are often overwhelmed with information overload and may have trouble deciding which information is trustworthy.

“Tweets, Facebook, photo sharing sites [are] all coming at them. Who can make sense of that?” she asked.

There are good and bad examples of social media use, said Hiltz. Gov. Christie has been widely acclaimed for employing it constructively during Superstorm Sandy, she noted. He was constantly tweeting, telling state residents where the problems were, what to do and what not to do, she said.

On the other hand, said Hiltz, during Sandy “we saw Photoshopped images and other misinformation come up.” There were pictures of sharks swimming in the streets of New York, for example. Some inaccurate information is the result of people just having fun; in other cases they may be passing on rumors they believe to be true or deliberately creating misinformation, she continued.

Emergency managers have to sift through that information to distinguish the true from the false. Until recently that was too big a task, and many were reluctant to use social media because some of it wasn’t trustworthy.

Social science has begun to study the trustworthiness — that is, what people can assume is correct — of social information.

What researchers have found, said Hiltz, is that individuals themselves can judge whether information is true or false by what is retweeted and by using trusted hashtags. For example, during Superstorm Sandy one of the hashtags was #Sandy, but large organizations such as the Red Cross now broadcast suggested hashtags for emergencies so that everyone uses the same one.

Studies conducted at the University of Colorado, said Hiltz, have revealed that retweets using the correct hashtags tend to be first-person detailed information about a first-person experience and can be deemed more relevant and trustworthy than the broader tweet stream.

There is also a belief that “the regular people have to do it ourselves,” said Hiltz. “People self-organize into local networks, often using Twitter, because it is the easiest to use and … the most robust tool for emergencies. It can store the message until it can find an open channel to send it on. They [the local networks] form the equivalent of ‘posses’ in [the] Old West,… groups to go rescue someone on a roof or [a person who] needs to be dug out of the rubble.”

Hiltz pointed out that incorrect information can jeopardize public safety, cause distress and hinder recovery by siphoning resources from where they are needed. There is also a great fear that irresponsible people who want to instigate terror will use Twitter.

After emergency rescuers were misdirected to an incorrect location during earthquake recovery operations in Chile, some researchers in that country returned and collected tweets during the four days following the episode.

They found that the social network was “quite able to discriminate between false rumors,” Hiltz noted. When claims were true, others affirmed this via that network. When they were not true, people questioned their veracity or simply denied that they were true.

The bottom line: tweeters will police themselves.

The development of automated algorithms that can aggregate and affirm the veracity of tweets, using signals like how long people have been on Twitter and their past tweeting history, is on its way, Hiltz added.

“What we need is better structures and features for validating citizen-generated information during disasters. For the most part, emergency personnel don’t have time to go outside of their own closed channels to see what is happening in the Twitter stream. They would like to click and link and get an automated update that says it’s 85 percent possibly true that you need to do something at a particular location,” Hiltz noted.

In the meantime, she said, the American Red Cross is training some of its own volunteers, who will be online remotely during crises to help filter and summarize information that comes from Twitter, Facebook and other social networking services.

Previous: Myspace Representative Testifies in Trial of Trenton Man Accused of Using the Site to Plot a Murder
Next: They see you, but do you see them? Growth of surveillance cameras booming in NJ