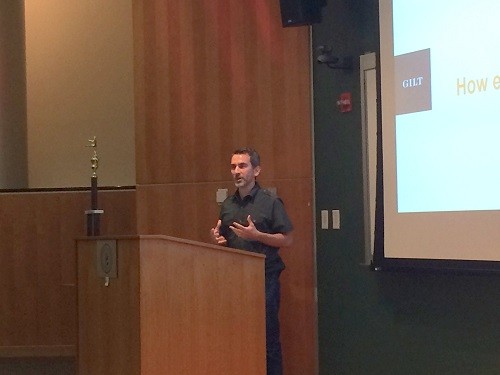 Speaking before an audience of about 150 at the Stevens Institute of Technology in Hoboken, Jacobs said he had had his first inkling of the power of emotions during his childhood, when his mother told him, “When you are sad, I’m sad.”

“This was a powerful moment for me — to think that she could actually feel what I’m feeling,” he noted.

“What I want to ask of all of you, when you are building your startups, is [to] really, really try to empathize with the customer,” he told the audience.

The NJ Tech Meetup is New Jersey’s largest technology community with nearly 3,800 members. Meetings take place monthly and include networking, “asks,” startup pitches and a talk from an inspiring speaker of interest to the tech community.

Jacobs launched into a discussion about Gilt and why people are passionate about it. He said it came down to a mix of great products — such as Chanel bags — at a good price, for a limited time and in limited quantity.

Consumers often have an emotional attachment to great brands, Jacobs said. They buy Chanel handbags to send the message that they are part of the group that wears the designer’s bags or that they are confident enough to wear them.

People love the word “free,” he added, and any marketing material that contains it drives them crazy and motivates them. Gilt caters to customers who don’t really need the discounts, but discounts help them feel as though they are in the know. “No one wants [to have] the feeling that they have been taken,” he noted.

Gilt started out as a closed site — insiders had to invite others to enter it. That let users communicate how wonderful they were to share something they could have kept to themselves. “It lets them show off in a graceful way,” said Jacobs.

The site is now open to everyone because Gilt needed more users than could be generated by referrals alone. “A company that relies on limited inventory as a business model is a hard company to scale,” Jacobs noted. “As we wanted to scale, we had to rely on other avenues to create emotional connections with customers.”

Gilt tries to understand who its customers are and what is important to them, and it is beginning to personalize their shopping experience. If the site knows a customer is the parent of a boy, for example, it might notify that customer when Ben Sherman shorts are on sale. Jacobs said personalization has received positive feedback from consumers.

The company also uses A/B testing –– testing that compares results from alternate wording or designs –– to make better connections with its customers, he said. “We A/B-test everything.”

Jacobs pointed to a change in wording on the site, resulting from A/B testing, that had made a big difference in sales. Gilt used to label some merchandise “final sale,” which created some friction with customers. Rewording the phrase to “Because the price has been further reduced, the bag is not returnable” reminds customers that they are getting a great deal on the bag although it can’t be returned, which alleviates some friction, he said.