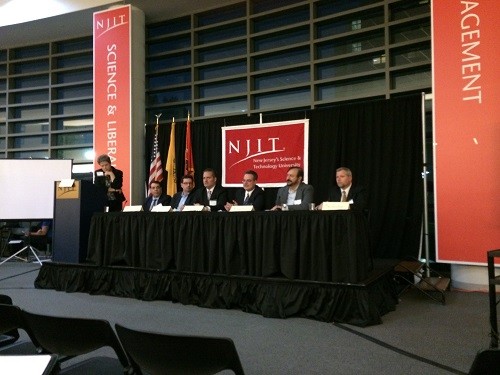 The panel of experts at the Jobs 2.0 event. | Esther Surden

The recent upSKILL Jobs 2.0 conference — an event focused on experienced IT workers who have lost their jobs and are trying to find new ones — provided information that job seekers can use as they endeavor to make the transition from one skill set to another.

Jobs 2.0 was organized by upSKILL, an NJIT-led, federally funded grant for training unemployed IT and science, technology, engineering and mathematics (STEM) professionals in areas in which northern New Jersey companies need workers.

The event featured a discussion of the 2013 employment outlook survey undertaken for the New Jersey Technology Council. Kurt Anderson, an attorney with Giordano Halleran & Ciesla and a coauthor of the survey, highlighted the areas of expertise that employers are seeking in employees and the soft skills they are looking for in candidates. NJTechWeekly.com covered the survey here.

Debra Wheatman, president of Careers Done Write, discussed social media, networking and résumé writing. She also looked at many attendees’ résumés at the event, advising them on how to change the résumés to get noticed by potential employers.

One of the evening’s highlights was a panel discussion organized by Katherine Kish, executive director of Einstein’s Alley, a nonprofit economic development initiative. It featured employers telling employees what they are looking for and how job seekers can get their attention. A video of the discussion can be found here.

In Kish’s opening remarks, she noted, “Globalization means we are all facing more competition from workers … overseas and machines … The trick is to make sure what you do is special and cannot be duplicated by R2-D2.”

She added, “The people who are really moving up are those who responded to competition by upgrading their skills and … their efforts.”

Attendees, many of whom had already taken extra steps to learn how to upgrade their skills, heard that how they brand themselves, operate within the community they are trying to join and network both on-  and offline are all key to securing a new job.

The panelists said they value soft skills like public speaking and the ability to communicate well with clients. Speaking for Data Inc., George Nikanorov said, “We brand ourselves as a people-based organization, not a body shop. At the end of the day, our technologists represent us” to the client and the world.

Technical skills on a résumé may get you an interview, but good communication skills, exhibiting your passion and making the interviewer feel like you’ll be a natural part of the team are what will get you the job, said Carney.

Participants were told that not understanding what recruiters are looking for is often what sends their résumé to the bottom of the pile.

A critical mistake job seekers make on their résumé is describing what a job entailed, not what they did at that job, Palinkas said. “Stop writing about a job and tell me what you did in terms I can understand. IT exists for one reason: to enable business,” he said, so job applicants should think about that when writing their résumés.

Later he asked the group, “How many people … have something in their career that was a major plus for some organization? How many put that at the top of their résumé? You have to highlight those kinds of things.”

Hornyak concurred, adding, “On your résumé, provide benefits statements of something you did that helped a company — saved them money, created a new process” and so on.

“If someone comes in with a résumé, the one I’m picking off the top of the pile is [that of] the person who has made an extra effort to be more than everyone else,” Rogers noted. If he finds someone who has volunteered, contributed to open-source software or written articles, he decides that person has the right attitude for the job, he added.

Networking through social media and by attending technology and industry meetings is critical, the panelists noted. It’s a lifelong commitment, not just something you do when you’re looking for a job, Carney said.

The panelists suggested that if you hear of a job that isn’t right for you, you should pass the information on to others who may be interested. They will do the same for you. As Carney put it, “The best way to get help from others is to provide help to others.”

“Keep in mind that the people who you network with don’t have to be in high positions,” Baskin said, explaining that they should simply know a lot of people. They can point you in the right direction at their organizations, he added.

Visibility is important for job seekers, Hornyak said: “The world today is about interpersonal communication and interaction. There are very few jobs left on the planet where someone is sitting in a back room and is left alone.”

Attendees were told they have to understand that the ratio of résumés to interviews is dramatically different than it was five years ago, with more people competing for the jobs out there. “It’s like being an actor. You have to go on a lot of auditions,” Hornyak said.

Palinkas brought up the importance of applicants showing they adapt well to change. He works with companies that have to downsize to remain in business. Sometimes companies will retain someone who might not have the exact skill set they need but can be a leader and help make change happen, he said.

Kish and the panelists talked about the power of joining groups. The Society for Information Management (Mountain Lakes) holds meetings for members who are in transition. Kish suggested joining the Institute of Electrical and Electronics Engineers (IEEE), attending its meetings and volunteering your help. “Volunteering helps people get real-world experience, and employers love that,” she added.

Palinkas discussed the Breakfast Club of New Jersey, which holds meeting for IT job seekers, and the Technology Executives Network Group, another resource for technologists seeking jobs.

Nikanorov added that job seekers should keep in touch and build relationships with the recruiters who have contacted them. Talk to the recruiters, he said. If you don’t have the qualifications for a particular job, recommend someone else to them. They’ll keep you in mind when a job you can do comes along.

Many audience members were concerned about their social media presence. They were told to present a single, unified brand across all social media and to be active on sites like LinkedIn, Facebook and Twitter.