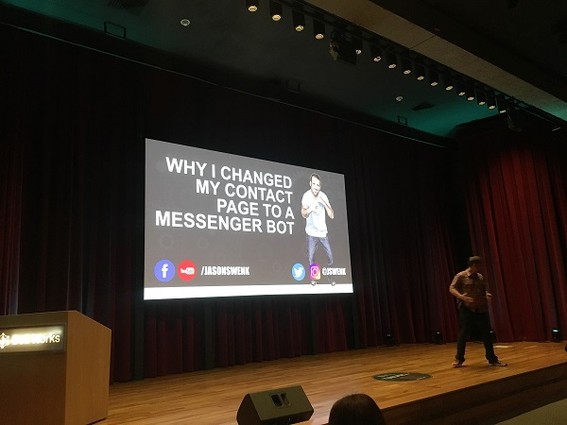 Jason Swenk at the NJDMConf at Bell Works | Dillan DiGiovanni

The light-filled atrium and a massive balloon arch welcomed the attendees to the second annual New Jersey Digital Marketing Conference (NJDMConf), held on July 20 at Bell Works, in Holmdel.

Several hundred people networked during what the NJDMConf website promised would be “a full-day of thought-provoking lectures from industry leaders.”

Attendees networked during the lunch break, enjoying subs from Jersey Mike’s, brownies and free drinks; and taking pictures at the photo booth.

Around 1:30 p.m., people filled the downstairs auditorium at Bell Works for the first of two afternoon presentations. The speaker, Jason Swenk, had left a large pile of copies of his book, “Accelerating Your Agency: An 8 System Playbook for Growing Your Agency Faster,” on the table at the entrance, and there were only a handful left by the time his talk began.

After a brief intro from Pete Schauer, marketing director at SEMGeeks, Swenk took the stage with high energy to share “Why I Changed My Contact Page to a Messenger Bot and How it Increased My Revenue.” He told the audience that “websites are designed to connect us, but they’re doing just the opposite.” And he compared the common website contact form to a black box into which customer information enters, never to see the light of day again.

His solution? Integrate a Facebook Messenger bot; make it fun; and make it real, so prospective customers don’t feel fooled. Then it will work wonders for your business. What kind of wonders? How about the $250,000 he made in two months?

Most websites lose people, despite design efforts to prevent this, Swenk said. The sites are often too busy, too confusing and too wordy. As peoples’ attention spans shorten, designers have an obligation to make access as easy as possible to help more customers in less time.

Swenk said, “Make it clear you’re not tricking anyone or pretending [the bot] is a real person.” The bot works well because people have their phones on them all the time. With the bot, “I can be reached, and I can reach you at any time.”

Swenk’s bot uses Don Draper from the popular series “Mad Men.” Despite his dislike for the character, he noted that the marketing icon was a good fit for his work as a consultant specializing in helping agencies grow. He suggested picking a bot that’s relevant to you and the work you do, so customers can easily make the connection.

Swenk said that other benefits of using a bot include “one-to-one conversations” and “faster responses that equal fewer lost opportunities for customers.”

The Messenger bot is a much better solution than take-over pop-ups. Swenk said, “Those piss me off. I came to a site to read something, I don’t want to have to click out of something to access that thing.”

During the audience Q&A after his talk, Swenk confirmed that you need a Facebook business page to use the Messenger bot. He noted that telling customers up front that they are communicating with a bot, and what they can expect from the bot, will make for a smooth transition to an actual person.

Swenk’s last piece of advice was to craft customer questions and conversations into content that can be used on social media, in blog posts and as podcast episodes.

The second speaker was Jared Christopherson, cofounder and chief risk officer at HOOCH, who talked about “Blockchain and the Future of Advertising.” The presentation provided a 101-level description of Blockchain and bitcoin by using segments of the “Last Week Tonight” show with John Oliver and graphics to demonstrate how the technology works. He said that if money exchanges become more decentralized, it will impact how companies can reach customers.

After the wrap-up and thank-you comments from Schauer, the crowd returned to the atrium for some last-minute networking before clearing out to avoid the Friday afternoon New Jersey traffic.