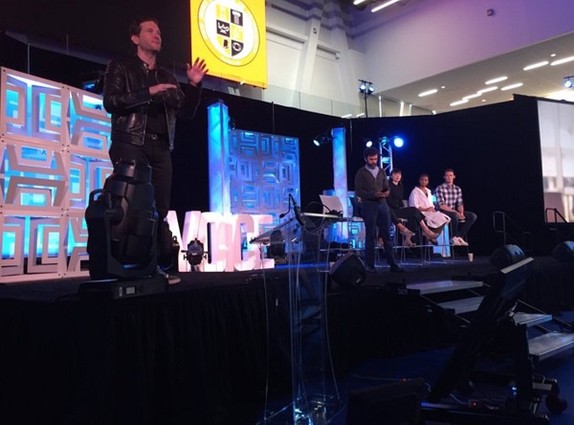 Yext CEO Howard Lerman announced the company’s partnership with Amazon during his keynote at the Voice Summit in Newark. | Courtesy of Yext via Twitter

Yext CEO Howard Lerman announced the company’s partnership with Amazon on July 25th during his keynote at the Voice Summit in Newark.

The online retail behemoth is adding phone numbers, addresses, and hours of more than one million businesses to the Alexa voice assistant platform. Customers can ask “What time does T-Mobile close?” and get hours for the nearest store. The global integration with Amazon will allow Alexa users access to business data used to power the Google search engine, Siri, and Facebook.

“Updates made to the Yext knowledge manager will sync in Google, in Facebook, in Apple, in Microsoft, in WeChat, and now in Amazon Alexa,” said Lerman during his presentation at NJIT. “(This) announcement represents a quantum leap forward in Yext‘s mission to put perfect information everywhere.”

Smart-speaker technology in the United States is dominated by a fierce Amazon-Google duopoly. Though the two corporate goliaths are not the only players in the voice-first space, the Google Home and Amazon Echo dominate large shares of the smart-speaker market.

“Amazon vs. Google can be a defining rivalry in the voice space for a long time. The brilliance of the Amazon – Yext relationship is that Amazon is able to bring in all of this business information into their Alexa umbrella without having to engage Google directly,”

Host of This Week in Voice and Alexa Conference producer Bradley Metrock told NJTechWeekly.com. “For Yext, it’s a huge win because they get their database of information and business insight integrated into the largest voice assistant smart speaker ecosystem in the world.”

The Smart Audio report from NPR and Edison Research estimates that over 43 million people in the United States own a smart speaker. The marketplace has adopted the technology quickly but not without concern.

“It’s amazing how much more reliant people have become and will become,” noted Jason Kelly during a Bloomberg News interview. “Although…there are still these little questions around privacy.”

Issues around privacy and data security provides leverage for privacy-focused, niche options provided by smaller players like Mycroft to compete, Metrock believes. However, voice assistant smart-speaker technology still has a few more iterations before average consumers can harness it for more than a tech gadget plaything.

“What we’re going to see over a period of time, is that voice assistants will proactively engage us. Alexa powered by Yext would ask say, ‘It’s about dinner time. The last couple of weeks in a row you booked a reservation for dinner on Sunday evening at 6:15. There’s a great restaurant over here to your right, coming up in about a half of mile. Do you want us to book a reservation for you?’” Metrock said.

“Rather than a one off question, Alexa will be able to have a continuously running dialogue with you over hours, days, weeks, your life to where it’s keeping up with you, knows your contexts and continues the conversation which will blow the door of to usefulness for most people. What we see so far is literally sticking a toe into the ocean of what’s about to take place.”