[This story is reposted with permission from our friends at ROI-NJ. You can find the original article here.]

The New Jersey Innovation Evergreen Fund, a program in which the state becomes an equity investor in startups that has been a favorite of Gov. Phil Murphy’s since it was first proposed in 2018, will be formally launched, Murphy will announce during his budget address Tuesday.

State officials promise it will be worth the wait.

Final details are expected to be approved by the board of the New Jersey Economic Development Authority in the spring. And this much is certain: This will not be the typical tax incentive program.

Under this fund, the state will invest $500 million into startups — and not just any startups, these will be companies that have been vetted by venture capital groups, helping to ensure more companies start here, grow here and stay here, the theory goes.

And, since the fund will look to reinvest many of the potential gains that could be realized, there’s a chance the fund could be self-sustaining.

Tim Sullivan, the CEO of the EDA, has described it this way.

“The state is putting equity into this,” he said. “It’s not a tax credit, it’s not just providing a subsidy, it’s providing an investment where the Evergreen Fund will be a part-owner of the company. And, if the company sells and makes a ton of money for its investors, great. The state is one of those investors.”

Of the $500 million total, $300 million will be raised by competitively auctioning state tax credits to New Jersey corporations over five years. The fund would then invest the auction proceeds, alongside at least $200 million in funds from venture capital firms, into promising startups with the potential to scale up and create jobs.

Companies that purchase tax credits through the auction also will be required to make additional commitments, including providing mentoring and networking support for startups that receive investments.

To ensure optimal return on investment, state officials said the fund will let private venture capital investors take the lead on identifying and investing in businesses in high-wage, high-growth sectors, such as life sciences, financial technology, advanced manufacturing and cybersecurity. To reduce risk and support founders and entrepreneurs who reflect New Jersey’s makeup, it is planned for the fund to invest in a diversified range of companies.

The fact that venture capital companies are involved is a big part of the potential for success, Sullivan has said.

“We’re not going to be picking winners, making the investment decisions,” he said. “We’re going to be partnering with the private sector to do so.”

Murphy has made the creation of an innovation economy one of his primary goals. In fact, it was a goal candidate Murphy made early and often during his initial campaign in 2017.

And, while his plans have been slowed — the initial proposal was part of his economic package that was stalled nearly two years before being passed in 2020 — his efforts in the vision have had impact.

Last week, a report from a company involved in private capital markets said New Jersey secured $5.5 billion in 219 venture capital deals in 2021 — good for the ninth-most in the country.

State officials have long said the Innovation Evergreen Fund could raise that total substantially, calling it a game-changer.

“Nobody’s got a program like Evergreen that’s going to invest in the innovation economy quite this way,” Sullivan has said.

Previous: New Jersey Investors React to News that State Was in Top 10 for Venture Funding in 2021
Next: Interview with Yogesh Shetty of Avibra, Making A-La-Carte Benefits Affordable 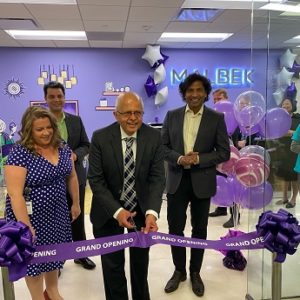