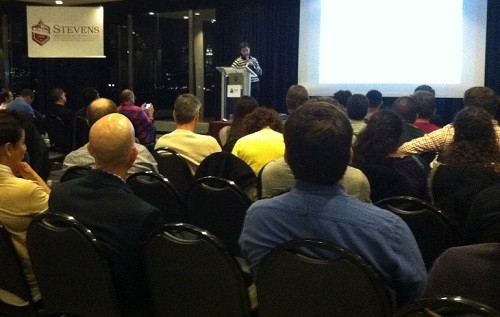 Two years ago Guillaume Gauthereau accepted an entrepreneurial award in Times Square, and as he stood onstage, he had an ironic feeling.

“It was the height of all [my success], you would think,” he recalled during his speech at the Oct. 23 New Jersey Tech Meetup, at the Stevens Institute of Technology, in Hoboken. “But at the time, I was the most miserable in my life.”

Gauthereau discussedhow he started as an entrepreneur, how he became successful, how he realized he was unhappy, and what he’s done to recover. He urged the audience members to remember their own happiness as they start companies and seek fortunes.

Gauthereau’s credentials include founding the flash e-commerce site Totsy, serving as CEO of luxury line Lalique North America, and stints with Louis Vuitton, Nestlé and Colgate. But before he became an entrepreneur, he started in his native France as a veterinarian, earning his doctor of veterinary medicine degree from the Ecole Nationale Vétérinaire d’Alfort, near Paris, which Gauthereau cited as the oldest veterinary school in the world, dating to 1765.

While in veterinary school, Gauthereau started his first company, which helped pet food and pharmaceutical companies market themselves to veterinarians. After graduating, he worked for Nestlé, but eventually realized that he needed to return to entrepreneurship. “When you have the virus, it never quits you,” he said.

His next venture was another pet site during the dot.com bubble. “Basically we just copied Pets.com,” Gauthereau joked.

Gauthereau recalled those wild days. He and his partners raised five million francs after a two-minute pitch in a bar, but he had to spend too much time convincing customers that it was safe to send their credit card numbers over the Internet.

After the dot.com bubble burst, Gauthereau returned to the corporate world, but five years later he was seeking his next startup opportunity. In 2008, he and a partner started another e-commerce site, this time one selling baby products. It was an unlikely choice for two childless men.

The new site, Totsy, followed the trend of flash e-commerce sites, with rapidly changing inventory marked at steep discounts. Gauthereau raised over $45 million in funding, built a mailing list of three million customers, and earned praise from Forbes, which labeled Totsy as one of the top 100 most promising private companies. The site expanded beyond baby supplies into women’s clothing, kitchen appliances, and even home insurance and cars. But it continued to have problems.

Gauthereau spoke about overcoming the traps for entrepreneurs, such as logistics and personnel problems. Totsy had to find a better shipping warehouse because customers were complaining about never getting their orders, and it revised the site and backend several times to accommodate thousands of people clicking the newsletter links at the same time.

Gauthereau said he learned about the need to hire good managers. “When you hire from zero to two hundred in three years, it’s very hard to know who you are hiring,” he said. “Someone needs to run the business for you while you’re fundraising.”

He also learned to balance his interests with the interest of his investors. After two years, a larger company offered to buy Totsy, and though Gauthereau was willing to sell, his main investor was not. “It’s very important to realize what your investor wants,” he said. “For my VC, [the offer] wasn’t enough.”

At this point, Gauthereau realized that he was unhappy. He felt incomplete, worried and stressed, common complaints of entrepreneurs. So he decided to change things. He resigned as CEO of Totsy, sold his possessions, packed a bag and bought a one-way ticket to India.

He volunteered at a poverty hospice in Kolkata, and later taught the hungry children of rice farmers in the Philippines who were too poor to afford their own crop. He helped the school plant a garden to feed the children. He also visited Nepal and several other countries.

Gauthereau returned home with a new perspective. He still serves on the board of Totsy, advises entrepreneurs, and is planning a new company. But he also meditates and keeps bees in the Catskills.

He spends his first and last hour of his day away from electronics. And he makes it a point to remove one unnecessary item from his home when he leaves in the morning.

“I decided after seeing beautiful things that I would come back with different vision of what really matters, about what it means to be happy,” he said.

Gauthereau closed his presentation by sharing his guiding principles for happiness, which he has often tied to entrepreneurship.

One principle was minimalism. “It doesn’t mean that we have nothing, just that we have the essentials,” he said. “We’re trying to do a lot, and we are never focused enough. Remove the layers.”

He encouraged spending time off the grid. “I think we get our best ideas when we disconnect, when we work in nature, when we do things fulfilling and different like biking, swimming, running or whatever it is that’s good for you,” he said. “New ideas don’t happen when you’re at the office, they happen when you’re looking at a wood fire in the countryside on a Saturday night. That’s when creativity comes.”

Another principle was to focus on people. “Keep the human in the equation,” he said. He talked about having to fire the third employee Totsy ever hired. “We did it the right way,” he said, adding prudence to civility. “We might need to rehire the person, or he might hire you one day.”

Gauthereau seemed to enjoy sharing his guiding principles, and when he finished, he urged the audience members to find their own happiness. “Seek inside, find your truth, and from there go and build your business,” he said.