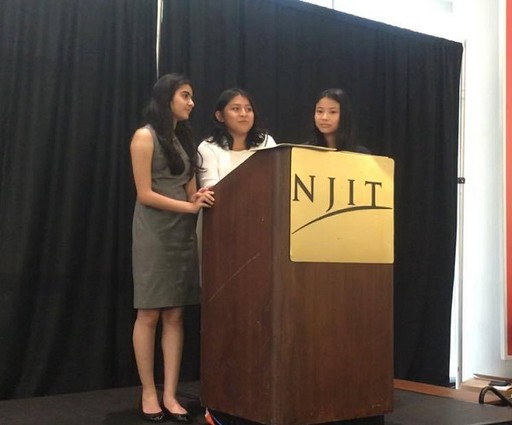 If you want to be inspired, take a look at the final project of Girl Unity, one of the teams that attended the Girls Who Code Summer Immersion Program at NJIT this year.  These young women put together a website that matches mentors in the U.S. with girls who need mentoring in developing countries. Here is their mission statement:

“There are currently 62 million girls who are out of school, and girl unity aims to connect those girls in developing countries to mentors who can provide them resources and opportunities in STEM. Mentors are expected to inspire, motivate, and educate the children and help them pursue their passion and interest. Girls and mentors communicate through video chat and messaging features that Girl Unity provides.”

NJTechWeekly.com met Elizabeth Song, Karina Sarango and Suchita Mistry, the team behind Girl Unity, at the Fownders pitch event in early August, and later spoke to them about their experience at Girls Who Code. The seven-week summer program is free. All of the girls researched and found this summer program on their own. None of them learned about it from their teachers or guidance counselors at their schools.

Mistry, who is a rising senior at McNair Academic High School, in Jersey City, said that she was really interested in computer science and had searched for programs that she could attend over the summer. She said she wanted to attend this program because it was highly interactive and “you could actually build your own project.”

Sarango, who is a rising junior at Technology High School, in Newark, said that she had thought about coding after seeing a television show about hackers. She is part of the engineering cluster at her school, but had no coding background at all before she came to the program.

“I’ll definitely do coding as a career, for sure. I’ve met some wonderful people here and there are many inspiring talks they have every week. They all inspired me, and coding is a good fit for me.”

Song, a rising junior at Montgomery Township High School, in Skillman, said that she had become interested in coding after watching a Code.org video that showed how she could actually create something in high school. She had also taken an introductory HTML class in eighth grade.

Song also praised all the networking opportunities she received during the summer. “We also made a lot of friends that will last a long time.”

The girls learned Python programming and Web development during the two months.  Mistry said that she had had some limited exposure to programming before, but “this went into depth for me.”

Mistry said she attended Girls Who Code to see if computer science was for her, if she really wanted to go into that field. “I worried that there would be parts that were hard, and I would have difficulty getting through. But, luckily, I was able to understand it through the help of others and collaboration.”

The final project was the highlight of the summer for these coders. That was when the three of them built the Girl Unity website.

Before starting on the project, the trio brainstormed topics that were “really relevant to us,” said Mistry. “We came across a video that said that 62 million girls are not in school right now. That made us think that we should do something about it, because we have the skills to make a website and potentially connect people.”

Sarango added that they wanted to serve people who needed the most help. “Even if parents can help and send kids off for education, they prefer the boys over the girls. … We thought we could help the girls. Code is very easy to understand. I feel like once you get the hang of it, everyone can do it.”

Mistry said that the Girls Who Code group took many field trips and met many folks in the STEM field who could act as mentors and “give girls in underdeveloped countries mentorship in coding so they could get jobs later on.”

The website includes a video chat feature and also a messaging feature if the webcam isn’t available to the girls. They can also email their mentors. And they don’t have to download anything as of now, Mistry noted.

Song added that Girl Unity has been reaching out to Children of Peace Uganda, an organization that helps former child soldiers, giving them a second chance. “The project is really a great way to do something you are passionate about, and do it through code,” said  Song. “We have actual students who are willing to use our website, but the main problem right now is that the Internet there costs money, and we need to raise money” to give them access to the Internet and, through the Internet, to an education.

Members of the New Jersey tech community interested in helping Girl Unity can sign up to be mentors here.

Previous: Opinion: Strong Spring and Summer in New Jersey Tech Sets the Stage for Fall
Next: Interview: Catching Up with Chris Sullens, President and CEO of WorkWave