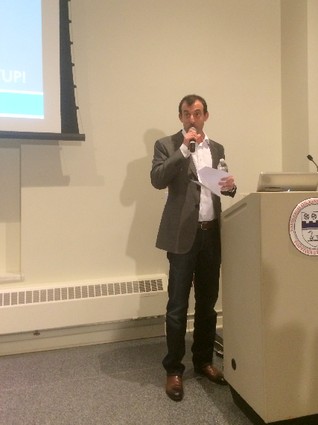 The April Morris Tech Meetup, held at Fairleigh Dickinson University (FDU), featured Noah Wrubel, the entrepreneur who founded the site Bare Necessities. Wrubel discussed how he had developed his e-commerce platform for women’s lingerie without ever seeking financing to keep it afloat. His is an excellent example of a private company that wants to remain private.

James Barrood, former executive director of the Rothman Institute of Entrepreneurship at FDU, introduced Wruble, noting that what the company founder had achieved is unusual: “He transformed an old-style, family-owned retail business into a modern, online-only competitor with $70 million in sales, which is remarkable when you think of all the competition out there.”

Wrubel recalled that he had started Bare Necessities in Newark and that the company’s first online transaction was made in September 1998. “Those days it was a really big deal just to be able to transact online,” he said, explaining that e-commerce platforms had to be cobbled together by the merchant.

Wrubel attributed much of his success to his business partner Bill Richardson, who is in charge of operations and IT. He noted that at every stage the two had had to take apart and reboot the business to drive it to the next level.

“The business we had at $5 million [in sales] was ripped apart so we could get to $10 [million],” he said, adding, “There are natural plateaus that happen along the way, and you have to break through them.”

Various obstacles appear at every stage of a business, he added. For example, in 2008, as the recession was just getting under way, Wrubel and his business partner had to decide whether to try to ascend to a new level or remain in the $40 million range.

They were willing to “double down and grow the business,” he said. “We basically took advantage of the recession and doubled our facility size,” moving to a 100,000-square-foot building in Raritan Center.

Part of being an entrepreneur and developing a business is betting on the economy, Wrubel pointed out. You are “always putting money ahead to grow the business, because as soon as you stop, the business stops,” he explained. He and his partner never “bet the farm,” he said, but entrepreneurs have to go “right up to the edge.”

“People create companies, not technology,” Wrubel added. “When we wanted to get bigger, we had to bring in people that knew what bigger looks like, that knew what growth looked like. If I want to grow from $10 million to $20 million, I can’t hire people who ran a $5 million business, because they have no idea of what happens at $20 million.”

Wrubel said when Bare Necessities got to that point, he and his partner knew they had to professionalize the staff, and that came with a lot of angst. The executives had to look for people who had big-company experience but were able to succeed in a smaller entrepreneurial environment.

It’s very hard to find that mix, Wrubel said. Some entrepreneurs love a small environment and essentially bale out before a company gets too big. Others launch their careers in corporate America, so it’s hard for them to exist without a personal assistant or a private office, he noted.

In the end, Bare Necessities was able to find people who fit the bill. Wrubel attributes much of the company’s recent success to its “great” VP of finance, who comes from a large company but has an entrepreneurial spirit, he said.

“If there’s one thing I’d like to impress on a small business that wants to scale, [it’s that] you need an awesome finance team,” concluded Wrubel. “We were able to measure things and look at [them] in ways we had never done before. We didn’t even know we were supposed to measure them.”

An early version of this story had misspelled Noah Wrubel’s name. Our apologies.