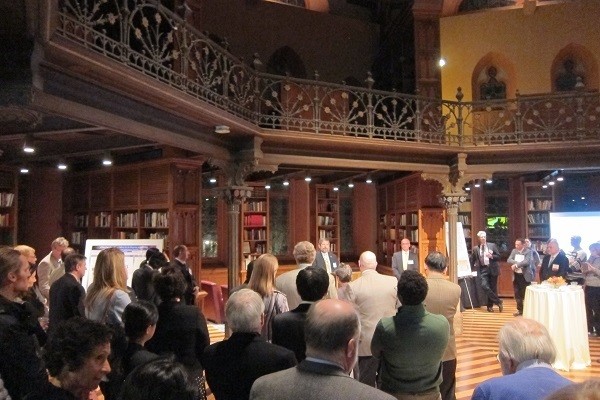 The annual event honors Princeton researchers and entrepreneurs who have developed methods, devices or services with potential market value. This year’s gathering also featured speeches by four business and technology leaders associated with the university.

The reception started at 5 p.m., when guests received complimentary drinks and hors d’oeuvres as they viewed the exhibits. Members of each project team, including faculty, graduate students and undergrads, were present to explain their work.

One of those projects was led by Warren Powell, professor of operations research and financial engineering. His team developed an algorithm to optimize battery use on a power grid.

Powell demonstrated this algorithm, which would help maximize energy efficiency throughout the dips and spikes in electricity caused by windmills or solar panels. The algorithm can model activity on a power grid under a variety of circumstances, thereby determining when and where battery power should be used. Grid operators could use the algorithm to decide when to use batteries or more conventional sources of electricity.

The company was formed by undergraduates Evan Corden; Delaney Mackenzie; Jack Hudson; and Colin Lualdi, who is Deaf and often communicates with sign language. Members of this team demonstrated their service to interested guests.

Debenedetti  said that PEAC was convened to explore new avenues for entrepreneurship that would “better serve the needs of our researchers and students at Princeton.”

Chiang explained the philosophy behind his work with PEAC, saying that entrepreneurship “the Princeton way” was meant to “strengthen and to amplify our commitment to the common good, to service all nations,” and to have a positive impact on society.

He also described the committee’s recommendations for enhancing the university’s entrepreneurial ecosystem. “We are exploring incubator space near campus, and potentially in some of the entrepreneurship club locations,” a place “for like-minded people to gather” and communicate, Chiang said. Princeton is also seeking additional funding sources for faculty, alumni and student entrepreneurs.

Chiang said that the school is also considering new entrepreneurship courses that would broaden the appeal to people outside the engineering and science departments. Co-curricular components such as internships, entrepreneur shadowing and hands-on projects have been recommended by PEAC as well.

This is because “entrepreneurship is a bit like swimming,” Chiang said. “You cannot learn swimming by going through many PowerPoints on fluid dynamics.”

Finally—and perhaps most importantly, according to Chiang—mentorship and alumni relations initiatives are being explored to maximize the quality of entrepreneurial teams that form in the Princeton ecosystem.

Chiang also praised the university’s resources for innovators. One example is the office of Corporate and Foundation Relations, which he said has been helpful to him in his other role as director of the university’s Keller Center.

The Keller Center, which specializes in entrepreneurship, often hosts events like the Nov. 6 presentation by Kiswe Mobile cofounder Wim Sweldens. It also offers a partnership program, as well as a venture sponsors program that seeks to unite investors, legal counsel and consultants with Princeton’s entrepreneurial community.

After Chiang’s speech, Ritter thanked the supporters of innovation and noted the importance of financial resources like Princeton’s Intellectual Property Accelerator Fund, which provides innovators associated with Princeton the early financing that is often vital to success.

“Data here and elsewhere shows that small amounts of proof-of-concept and validation capital … can have a multiplier effect, and is effective at attracting additional downstream development funding from investors, government agencies and companies,” he said.

Abramson spoke about his role as president and CEO of Universal Display Corporation and about the company’s relationship with Princeton. UDC began with technology licensed from the university, and Abramson has been collaborating with Princeton since he joined the company, in 1996.

OLED technology started in the early 1990s, when Princeton faculty members Stephen Forrest and Mark Thompson investigated methods of getting organic molecules to produce colored light. UDC founder Sherwin I. Seligsohn licensed this technology in 1994, and the company has grown significantly since then.

“We employ over 140 people who were born in twenty countries, with offices on three continents,” Abramson said. “We have more than 3,300 issued and pending patents worldwide. Our customers are some of the largest and most influential companies in the world.”

Abramson said that much of UDC’s success has been due to the company’s collaboration with Princeton. “Frankly,” he said, “it’s an amazing evolution to be able to stand here today and demonstrate what a strong collaboration between Princeton—a world-class university—and UDC, a dedicated team of versatile, persevering entrepreneurs, can create.”

After the speeches, the guests learned about other research projects, including:

– A method for removing nitrogen from wastewater

– A technique that activates antibiotic-producing genes in bacteria, potentially creating new treatments and reducing the threat of antibiotic-resistant germs

#NJESP Impact: @HoliChowPets closes on guarantees on investments totaling $50,000 through our NJ Entrepreneur Support Program. Holi Chow - which has 2 employees - will use the funding to grow its online, customizable, subscription dog food service. https://www.njeda.com/njespfirstapprovals