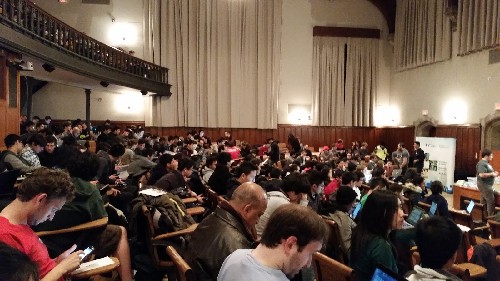 More than 600 students, mentors, corporate sponsors and other tech enthusiasts descended on Princeton University the weekend of Nov. 14-16 to compete for $6,500 in prizes at the Fall 2014 HackPrinceton hackathon.

The team explained the event format and teased out some of the upcoming items on the agenda, such as the formation of teams, API talk sessions and an all-you-can-eat ice cream truck that would be arriving on campus later on that night.

Jin also introduced representatives from some of the major corporate sponsors of the event, including the lead sponsor, Infosys, as well as Apple, Bloomberg, Bridgewater and D.E. Shaw.  The Infosys presentation provided a rundown of the company’s product lineup, while the Apple presentation stood out, with a demonstration of how to get access to the company’s mobile security API and an offer of iPads to every member of the team that made the best use of the Apple framework.

The API sponsor session began around 9:30 p.m. in Sherrerd Hall. Among the speakers was Michael Liguori, the founder and CEO of Vognition, who offered his company’s voice control platform; and Albert Wenger, of ziggeo, who demonstrated an API for recording and playing back video in the cloud.  Other API demos were offered by Microsoft, Bloomberg, Nvidia, MongoDB, Twitter, Facebook, the Princeton Undergraduate Student Government, Comarch/IsaaCloud and Kimono Labs.

Jean Wang, writing in the Princeton Alumni Weekly, reported on a team headed by Princeton student Rachel Margulies’16. This team was stationed next to the Apple table, which was staffed with Apple engineers offering on-site support for participants.

Team member Eric Principato ’16 told Wang, “I think we’re doing a lot of learning. I think we’re doing as much learning as we are coding.” The team was working on a project to use Twitter for cloud storage, “an idea they came up with on Friday,” according to Wang.

On Sunday, the pitching began. A group of Canadian students pitched GottaGo, an app that crowdsources bathroom locations.  This was that group’s “first hackathon, and they chose Princeton at the urging of one of their members, Natan Weinberger, who grew up nearby,” Wang wrote.

Downstairs, more projects were being judged, including Mini-Med, created by Sreela Kodali ’18, Bertha Wong ’18 and Vivian Mo ’18.  According to Wang, Mini-Med was designed as a portable health-care device to collect biomedical data and display the information online.

“We didn’t know how to make a website before this, and we’d never worked with an imp,” which is a hardware and software platform that works with the Internet of Things, Kodali told Wang. “We’ve learned a lot in the last 24-hours.” Mini-Med was the winner of the Best Electric Imp Powered Project.

At the end of the event, JusText took first place for software. Teammates Rohan Doshi ’18, Juan Sepulveda ’18, and Ruiqi Mao told observers, “Think of us as a Siri for SMS.” Users text an assigned phone number with a request, and internet-connected servers text back a response.

Princeton students also won the hardware prize. Their hack, called ASLTegra, is an American Sign Language translator for the NVidia Jetson TKI, written with OpenCV. It uses letters only, and each letter can be mapped to a system call (for example, to launch Firefox).

Find all the projects at HackPrinceton here.