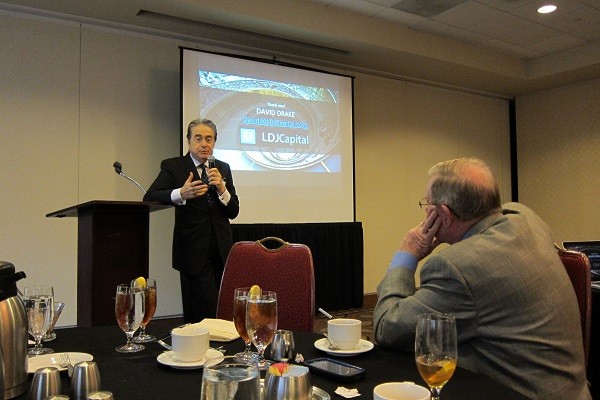 If you want to guarantee a successful equity crowdfunding campaign, “you need to find 20 bloggers with a minimum [of] half a million readers in the business you’re in. Then you need to figure out how to convince them to release the article about your campaign the same week.” That’s what crowdfunding expert David Drake told guests at a luncheon organized by the New Jersey Entrepreneurial Network in Princeton on Nov. 12.

Why the same week?  “If they release it over time, not enough people will be talking about it. This way, there will be buzz no matter where you turn in your industry, because you’re reaching everybody,” he said.

Drake is a venture capitalist who founded LDJ Capital(New York), a private equity advisory firm, and The Soho Loft, a company that organizes conferences and produces media related to crowdfunding. He currently contributes to Forbes, The Huffington Post and many other publications.

The second featured speaker, Bruce Lipnick, runs crowdfunding platform CrowdAlliance (New York). Among his many other accomplishments, he is also the founder, chairman and CEO of investment-management firm Asset Alliance Corporation(New York).

During his talk, Drake told the audience that crowdfunding is when “two or more people make a payment online towards a SPPICE—service, product, project, investment, cause or experience.”

Crowdfunding can be used to finance a variety of projects, such as startup companies, nonprofit organizations, books, bands and video games. The money collected may fund an entire company, or a small piece of something much larger.

Two of the most well-known crowdfunding platforms, Kickstarter and Indiegogo, use a reward-based system. In this system, donors contribute money to a crowdfunding project in exchange for gifts or privileges.

But not all crowdfunding is reward-based. In fact, Drake and Lipnick work mainly in equity-based crowdfunding, which was made possible by the Jumpstart Our Business Startups (JOBS) Act.  In equity crowdfunding, investors contribute money in exchange for a stake in the company or project being funded.

Title II of the act, which went into effect on September 23, 2013, legalized the general solicitation of capital in exchange for equity. However, only accredited investors are currently allowed to contribute to equity-based crowdfunding efforts. Title III, which would allow anybody to contribute to equity-based crowdfunding, is still undergoing extensive reviews by the U.S. Securities and Exchange Commission.

Despite Title III’s uncertain future, a large number of crowdfunding platforms are already up and running. Drake gave the audience advice on how to use these platforms effectively.

When you take your fundraising effort online, “you need a circus, you need attention, PR, press, marketing,” he said. That’s one reason why The Soho Loft  produces media related to crowdfunding. It’s also why, he said, guaranteeing success is so difficult.

“You have to have a crowd that listens to you,” Drake told the audience. Fortunately for entrepreneurs, there are still ways to build a crowd without having to influence 20 famous bloggers. “You can pay for a crowd,” Drake said, “or you can do it cleverly—partner up with somebody who has a crowd.”

Drake used a hypothetical example of a restaurant owner trying to raise money to open a second restaurant. He suggested that the restaurant owner could “find a band that’s local and have them do the video.” The band’s fan base will “be looking at the video, and now you found a crowd.”

He also suggested finding somebody with a list of potential contributors. “Partner up with them, use their list,” Drake said, adding that entrepreneurs should make their project align with the list holder’s interests.

One of the other key elements in finding supporters is building trust. When entrepreneurs decide to use crowdfunding, “you go from private to public entity,” Drake said. “Which means you have to have a corporate profile, corporate identity. You have to instill trust that you exist. Because if I’m going to give you money online, I want to be able to turn to Forbes and see that you’re being quoted.

“We all put money in the stock market,” Drake continued. “Did we meet the CEOs? No.” He insisted that building trust in crowdfunding works the same way. When entrepreneurs go online for crowdfunding, he said, they “have to start behaving like a public company. You need to have press; thus, I write. You have to show up at conferences like this, you have to speak, you have to get quoted.”

He recommended creating trust through promotional videos, a company website, and a LinkedIn profile. “People call me and say, ‘I don’t trust this guy, he doesn’t have a LinkedIn profile,'” he told the audience.

Although it is essential to find contributors, it is also important to consider what types of boundaries should be applied to investor relationships. Otherwise, entrepreneurs may find themselves having to answer to an overly large number of investors.

Drake’s recommended solution was for entrepreneurs to set terms that preserve their ability to make decisions on behalf of all the investors. He added that it is important to “have a clawback or an exit strategy where you can actually say ‘When I’m selling, you all have to sell too.'”

Lipnick took the microphone after Drake and expressed his optimism for the growth of crowdfunding and added, “I’m transitioning away from the traditional world of managing money, hedge funds, things like that, and going into crowdfunding, going into the Internet, because this is the future.” Lipnick also praised the ease of crowdfunding compared with more traditional methods of raising capital. “This is so accessible, and so clean, and so easy—I love things like that.”

Some of Lipnick’s crowdfunding efforts will go towards technology projects, he said. He plans to raise money for software company Code Rebel and for entertainment productions on his new streaming service, Ver On Demand. This website will be like Netflix, “but for culture and performing arts,” Lipnick said. He added, “We’re going to stream film festivals, Broadway, off-Broadway shows, ballet, opera, and rock and pop concerts.”

The question-and-answer session took place after Lipnick’s talk, and lasted for more than 25 minutes, with attendees eager to learn more about crowdfunding, the current state of the JOBS Act, and about the speakers themselves.