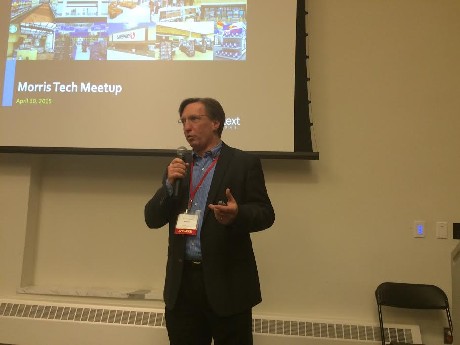 Mark Hardy, the CEO of InContext Solutions (Chicago), and a Jersey Shore resident, came to the Morris Tech Meetup on April 30 to provide some insights into using virtual simulations for online marketing.

He also shared with the audience the decisions that led to InContext Solution’s rise from a startup to a high-growth company.

InContext Solutions was formed by game developers and researchers who were trying to figure out how to stream virtual simulations via the Web for the purpose of research. While many games already did this, the group wasn’t looking to reach gamers. They wanted to reach a mass audience.

“So the challenge is: How do you take a cutting-edge technology and dumb it down and stream it on grandma’s computer? You don’t only want responses from millennials,” he said.

As an example, he referred to McDonald’s, noting that its coffee tastes better than Starbuck’s in consumer tests, yet people don’t choose to hold company meetings there.

“The experience Starbucks gives you is far more conducive to you going there and spending your time meeting people. … It’s not only about having a good product, it’s about understanding how your experience draws people in.”

Hardy pointed out that retail isn’t all about Amazon. Some 92 percent of retail is still offline. “Some 70 percent of consumers want to go to a store,” he said, but “their issue is that they don’t like the experience.”

Participants in a test respond to a short online survey that asks a variety of questions, even about their height. “If a person is five feet tall, it’s a very different experience for them than for someone who is six feet tall,” Hardy explained.

They are then sent into a virtual environment with a mission, perhaps to pick up a certain brand of cereal. Or they are asked: “If you had $20 to spend, what would you buy?”

The participants walk through the virtual environment, pick up products, zoom in and out and look at all the packaging. After checking out, they respond to another survey, this time about the experience. While each participant is “shopping,” InContext Solutions is measuring how much time he or she spends in an aisle or with a product.

It’s not about the virtual reality experience, said Hardy. It’s about getting real-world information, analyzing it and getting the retailers to success before they go to market, before the money’s been spent to build their stores. In the past, of course, retail stores were designed with very little data behind the configuration.

Discussing how the company transformed itself from a small startup to a bigger, growing company, Hardy said that the founders had a great idea, thought everyone was going to buy it, and went out for a “serious early-stage round.” However, “it worked beautifully for the first six months, then none of the clients were renewing.”

Hardy recalled that when he was hired in the second half of 2012, 20 days before Hurricane Sandy, the company was out of cash. He said that his objective was to put the technology into a platform and into the hands of the user. “The first thing we had to do was raise another early-stage round.” The company launched its software seven months later. And when it had a product everyone loved, it went out for more money to scale.

Vision is very important for startup growth, Hardy said, and making that vision real to the employees is not an easy task. Just because the CEO has a vision, that doesn’t mean the employees share it, unless that vision has been imparted to them.

“So the first thing we did was chunk it up. We made them focus on the short term rather than the long term.” The company went for a three-year vision, he said. “You have to make it easy for people to understand.”

Communicating the vision through the mission statement is imperative. “Basically, we provide faster, smarter more profitable decisions every day.”

When Hardy first presented this vision, people were skeptical. The company wasn’t a software company at the time. It sold services. Generally, no one believed that a services company could transform itself into a software company, he said.

As CEO, Hardy made sure that he had the right people in the right seats at the company. “That’s not easy in a startup. You take who you can get,” he said.

Hardy said he had to release a third of the company, and that half of the company’s remaining staff turned over during the next 12 months.

Then he started paying attention to what he called the “Rising Stars” in his company, and empowered them to continue creating or leading.

For the “Steady Eddies,” who perform well every day, you have to let them “fail a little,” so they will continue to learn.

The hardest decisions, he said, are about the people who have the will but not the skill. If they are able to acquire the skills, he suggested, you should put them under the steady ones and the stars to see if they can raise the bar. As for the “Stubborn Group” of employees, you have to move them out immediately, he said.

The hardest group you will ever have to deal with are the “Brilliant Ones.” They develop everything, but have bad attitudes. Startups are afraid to lose them, but “here’s one thing you learn: When someone is no longer there, you survive.”

Also, he cautioned that, when you are in high-growth mode, the worst thing is to have “Grumpies,” who pull everyone down. “That one person or group will keep you from succeeding faster than any other.”

The next thing the company did was to focus on delights.  “Customers expect big wows, but they remember little wows.” InContext Solutions videotaped the end-user experience, with data shown inside the “store” and charts and graphs popping up at the end, to the delight of the clients.

Finally, the company focused on speed. Hardy said that making sure the company asked the question “Why?” enabled it to release software that pleased customers only seven months after he took over.