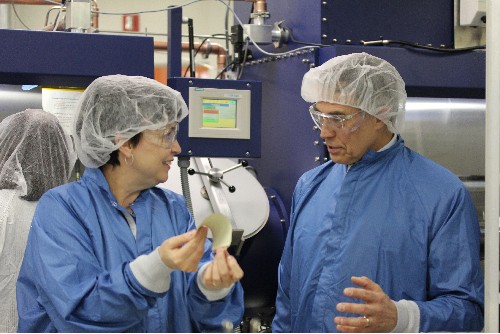 Holt, who is retiring from Congress this year, has been an advocate for science and technology in Congress with some sources saying he helped secure $22 billion for research in the 2009 stimulus bill.

During his visit to Universal Display, Holt highlighted the benefit of tax credits for R&D companies, for which he has tirelessly advocated throughout his career. Holt supports this economic incentive to drive growth and economic vitality, including job creation.

“But Congress let the tax credit expire last year, putting in jeopardy future job-creating research at companies like Universal Display. It’s time to renew the tax credit and make it permanent,” he said.

On Thursday, April 1, Holt introduced legislation to fund the Office of Technology Assessment, which was quickly voted down the next day by a 164-248 vote, according to InTheCapital on Streetwise.

[Addition on 5/6/14: Universal Display’s shares have taken a hit recently based on a report by Kentaro Ogura of Nikkei’s Asian Review that the company’s important customer Samsung may have abandoned plans for a new factory to manufacture OLED displays for televisions. This via Tech Trader Daily.]

Natcore: Natcore Technology says it has achieved a significant milestone in its quest to commercialize its black silicon wafers.

The company, which is headquartered in Red Bank but has R&D facilities in Rochester, N.Y., shipped the wafers to one of the world’s largest photovoltaic manufacturers to test the process of turning black silicon wafers into working solar cells in an actual production line.

“We put these cells through the Chinese manufacturer’s process with essentially no modification to the process itself, except for the fact that certain steps were completely removed,” said Dr. David Levy, Natcore’s Director of Research & Technology. “And the removal of these steps projects to yield cost savings of as much as 23.5 percent.”

Synchronoss: OnMobile Global, which calls itself a pioneer in white-labelled, value added services for mobile, landline and media services providers, has quietly divested its Voxmobili subsidiary to Synchronoss (Bridgewater). The company executed a binding share purchase agreement with Synchronoss. According to RTT news, OnMobile will realize $26 million, Voxmobili’s book value, upon consummation of the deal, subject to escrows and other conditions.

OnMobile Global and Synchronoss, a leading player in synchronization technology products, settled ongoing litigation prior to this acquisition.

Synchronoss had alleged infringement of patents by some synchronization products of Voxmobili and another subsidiary. The matter was before the District Court of New Jersey, an article on the Equity Bulls website said.

As per the terms of the settlement, Synchronoss completely released OnMobile Global and its subsidiaries from all claims without any admission of misconduct by either party. A joint motion was filed with the Court seeking dismissal of  the litigation.

Synchronoss also released its earnings results for the first quarter on April 30, saying that first quarter financial results were at or above the high end of expectations on both the top and bottom line.

“The company’s non-GAAP revenue of $98.7 million grew 25 percent on a year-over-year basis and exceeded the high end of our guidance. From a profitability perspective, Synchronoss generated a 25 percent non-GAAP operating margin and non-GAAP EPS of $0.39, which was at the high end of the guidance range,” CEO Stephen Waldis said in a conference call.

“The first quarter was a strong start to the year for Synchronoss, particularly in our Cloud Services business, which grew 83% year-over-year. Now we are encouraged by the early results, as our major mobile operators bundle our cloud software very effectively with their core communication services,” he added.