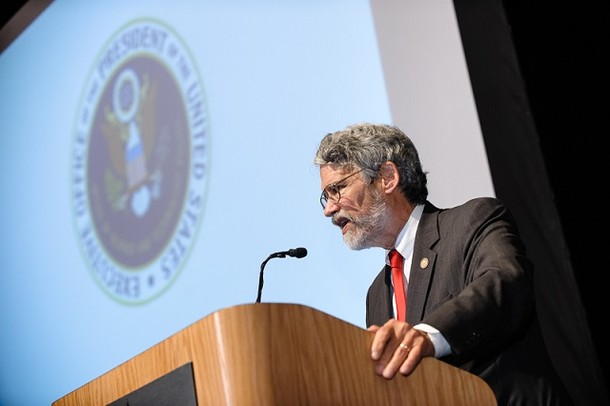 Dr. John Holdren, Director of the White House Office of Science and Technology Policy (OSTP), explains how the Obama Administration has “stepped up to support science, technology and innovation. | Stevens Institute of Technology

Stevens Institute of Technology continued its newly minted tradition of bringing high-profile lecturers to the Hoboken school’s campus through the President’s Distinguished Lecture Series. The program was initiated by the school’s president, Nariman Farvardin, in October 2012.

On May 8, 2013, Farvardin introduced John Holdren, presidential adviser, director of the White House Office of Science and Technology Policy (OSTP) and cochair of the President’s Council of Advisors on Science and Technology (PCAST). Holdren provided a laundry list of Obama administration accomplishments in science and technology to several hundred Stevens alumni, faculty, students and guests.

At one point Holdren cited the JOBS Act — which authorizes crowdfunding for innovation — as one of the administration’s accomplishments. The act has been bogged down in rule making since its passage.

After the lecture, NJTechWeekly.com asked Holdren why, despite the administration’s best intentions, the crowdfunding portion of the JOBS Act has stalled for so long.

While Holdren said he couldn’t talk about the internal processes taking place to help push it across the finish line, he noted that the administration is committed to it.

One member of the audience interrupted Holdren’s talk to protest controversial moves the administration has made in the running of NASA, including shutting down manned space missions.

In response, Holdren said that prior to the administration’s taking over NASA, the organization was broken. Noted Holdren, “The NASA we inherited” had a program with goals of returning astronauts to the surface of the moon by 2020 and going to Mars at some unspecified time, “but the budgets to meet the initial targets had not been provided, the program was hopelessly behind schedule and over budget … and the overruns … were imperiling all the other NASA missions.” The administration rebalanced the program, encouraging private firms to take over bringing cargo to the International Space Station, he said.

President Obama really understands why science and technology matter to the national agenda, said Holdren. It isn’t widely appreciated, he noted, that during his first term the president appointed five Nobel laureates in science to department positions and another 25 prominent scientists to other offices.

“He appointed a chief technology officer and a chief information officer for the whole administration for the first time in the history of the U.S. government,” Holdren pointed out.

According to Holdren, Mr. Obama has used the presidential pulpit to explain why science and technology matter to the American public. Moreover, he has held many science-related events, including White House science fairs and an astronomy night for 300 middle school kids on the White House lawn.

The president appreciates that “science, technology and indeed innovation are central to meeting virtually all of the key challenges we face as a nation,” asserted Holdren. These include “the challenges of economic development and growth; job creation; the challenges of biomedicine and healthcare delivery; the abundant challenges of clean, safe and reliable energy; of climate change” and many others.

When Mr. Obama took office, the administration started with a framework called The Strategy for American Innovation , said Holdren, which included investing in the building blocks of innovation. Some of the focus has been placed on accelerating business innovation with a research and experimentation tax credit, which the administration wishes to make permanent. The president would like to see more support for engineers in their early careers and for young women in tech fields, added Holdren.

Public-private partnerships have been a big deal in this administration, said Holdren. In 2011 the administration launched Startup America, “aimed at bolstering entrepreneurship by increasing the success rate of high-growth startups.” Challenge.gov, also begun by the administration, provides serious projects and problems that innovators can attempt to solve for prizes.

Listening to the speech, it was easy to get bogged down by the weedy bureaucracy that is the federal government and its approach to science and technology. Holdren provided an overview of what OSTP does, and its mission is vast and complicated. “We have about 100 people,” which seems large for a White House office, he noted, yet small when you think about all it does.

For example, OSTP is responsible for providing policy advice on technology for any issue on the president’s plate, Holdren explained, from national security to biodefense to Internet policy. The other side of the coin is developing policy for science and technology, which includes STEM education and workforce development, he added. Issues such as broadband policy and open government policy fall under this jurisdiction.

The organization provides oversight for NASA and the National Science Foundation. “We also carry out a range of functions in support of national security preparedness and communications,” said Holdren. Moreover, OSTP houses the president’s technology adviser, he noted.

“One of the great things about my job is, if I can’t find the expertise in the government to find the information I need, just about anyone in the science and technology community will take my call,” said Holdren. “And if I say the president needs to know about it by 10 a.m. tomorrow morning, generally folks will deliver … and on time.”

Many of the council’s activities, such as developing an emerging technology committee, didn’t exist or were in a somewhat dormant state prior to President Obama coming into office, noted Holdren.

The purpose of PCAST is to link the administration to the wider science and technology community, he explained, adding that it is a crucial resource for policy formation.

PCAST has been extremely active during the administration. Mr. Obama has asked for studies on many issues that affect the country as a whole, said Holdren: “The president enjoys PCAST … he really likes working with scientists … he gives his science advisory people a lot of attention.”

A number of the recommendations made by PCAST have shown up in the budgets the president proposes to Congress, said Holdren. “It’s a source of almost instant gratification … we present a report to the president, and he will read it overnight and the next day say that he will implement five out of six recommendations and [explain] why he is not implementing the sixth,” said Holdren. Mr. Obama will immediately order cabinet secretaries and agency heads to get moving on recommendations he approves, he added.

A video of the complete presentation is available here.