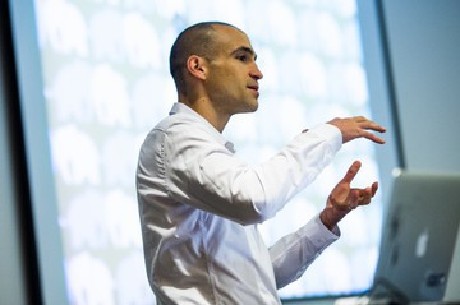 How do tech entrepreneurs get customers hooked on their products?

Short of somehow lacing them with possibly illegal chemical substances, they’ll have to satisfy a compelling need.

Eyal wrote the book Hooked: How to Build Habit Forming Products, and he was the guest speaker at the NJ Tech Meetup workshop at Stevens Institute of Technology in Hoboken on February 24.

Eyal started by commenting that some of the most successful tech products were initially dismissed as “toys,” but soon became almost essential parts of everyday life. According to Eyal, the companies offering these products had discovered how to make using their products become habits, which he defined as a behavior done with little or no conscious thought.

Eyal said that half of all human activity involves some sort of habit, from eating and bathing to watching television and smoking cigarettes. And more of those habits now involve technology.

“There’s an explosion of companies using the psychology of habit design,” he told the audience.  “We are on the precipice of an age where we can use habits for good,” to better people’s lives.

To show how companies design products to induce habits, Eyal presented a diagram of what he called the “hook,” which had four parts: trigger, action, reward and investment.

“The hook is an experience designed to connect your user’s problem to your solution with enough frequency to form a habit,” Eyal said. “Every hook starts with a trigger. A trigger tells the user what to do next. It provides some kind of information. It’s a cue to action.”

Triggers are either internal or external. External triggers are visible, such as buttons that tell users to click here or buy now, or even one friend encouraging another.

Internal triggers, however, are trickier for product designers to create because they rely on cognitive associations already in a user’s mind. “What I think product designers don’t think about enough, and what turns out to be absolutely critical when it comes to these long-term habits, is the importance of the internal trigger,” Eyal said.

Internal triggers involve emotions. “What we do in response to feeling lonesome or bored or tense or dissatisfied or fearful, what we do when we experience these negative emotions, instantly triggers these behaviors that we do with little or no conscious thought,” he explained.

To further explain internal triggers, Eyal talked about Instagram. He asked an audience member about his last Instagram post to show how the app calms a deep human fear. “When he saw this image that made a great shot, this thing he wanted to capture that he feared would be gone forever unless he caught it, the solution for fear of losing that moment was Instagram,” he said.

The next part of the hook, the action, is the habit itself, such as scrolling on Pinterest or hitting play on a YouTube video. Here Eyal cited the work of Stanford psychologist BJ Fogg, who says that every human behavior requires sufficient motivation, ability and triggering. “With this formula, you can create any human behavior,” Eyal said.

To demonstrate BJ Fogg’s theory, Eyal listed reasons why a person wouldn’t answer a phone. She might not want to talk to the person calling, thus having no motivation. She might not be able to reach the phone when she hears it ringing, lacking the ability to answer. Or the phone might be on silent, meaning she has no trigger telling her to answer the call.

The lesson for startups, Eyal said, is that they must make their products easy to use.

As an example, he showed an early Twitter homepage, one that had a lot of information explaining the service. Eyal said that Twitter’s designers realized that users weren’t stumbling onto the site, but were actively going there after hearing about it.

The designers understood that they needed to reorganize the information to make it easier for the users, and to more accurately match the users’ motivations and abilities with the right triggers.

Eyal then got even more scientific, describing the portion of the brain called the “nucleus accumbens,” which researchers began studying in the 1940s by stimulating the brains of lab animals with pleasure-inducing electrodes.

The most successful products, Eyal said, tickle this anticipation with variability. So, people check Facebook because they want to see what their friends have posted. They keep scrolling on Twitter to see the next tweet.

“The unknown is fascinating,” Eyal explained. “This bit of variability increases engagement, increases focus, and is highly habit-forming.”

That continual sensation involves the next step in the hook: the reward. Eyal said there are three types of rewards.

The first type is based on the sense of belonging to a tribe; these rewards come from other people in the form of partnerships, cooperation and other interactions. A retweet is a prime example. The second type comprises the rewards of the hunt, such as occurs when scrolling a feed. The third type is intrinsically pleasurable, such as a person’s search for competency, control and mastery while playing a game or crossing items off a to-do list.

Rewards lead to the fourth stage of the hook, investment, which happens when a user invests in the product in anticipation of a future reward.

For example, one Snapchat user sends a message to another in anticipation of a response. Twitter users invest in the service to obtain the tribal reward of having more followers.

Sometimes these investments lead to cash rewards for the user, such as when an eBay seller or an Airbnb host is able to charge more because of a good profile. The investment stage also loads the next trigger, sending the user through the hook again.

Second, he responded to a question that perhaps many audience members had in mind: Is it moral to manipulate customers in this manner?

“If you had that reaction, bravo,” he said, recalling a recent viral quote saying that tech products are becoming the cigarettes of the 21st century.

Eyal told the audience that entrepreneurs have a responsibility to use habit psychology for good.

“I encourage you to pick one of the world’s problems; to engage people in something meaningful; and to use the psychology of habit design to help people live happier, healthier, more connected and more productive lives,” he said.

Previous: Technology Marketing in the Digital Age: How to make your logo a critical component to your company’s success
Next: First of its Kind Engineering Program Gives High School Students a Free Year of College