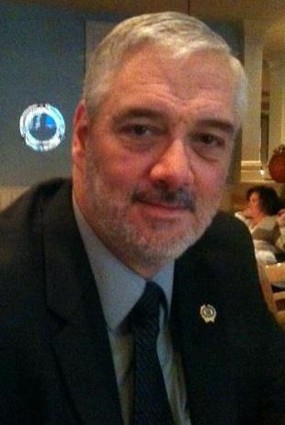 [This was our second most popular story so far in 2014. We are reposting it while NJTechWeekly.com is on vacation.]

That’s when Superstorm Sandy roared up the East Coast as a hurricane, made landfall as a tropical storm near Brigantine, did an about-face and became a nor’easter. The storm subsequently knocked out phone, cable and other communication lines and flooded entire towns, washing away bridges, homes, boats and cars.

And then, after the winds died down, there was silence — no electricity, cable television service or Internet, and spotty, if any, cellphone service.

Some 2.7 million outages were reported in New Jersey alone, according to a six-month predisaster-to-recovery report issued by the Federal Emergency Management Administration (FEMA) on April 25, 2013.

During the blackout period there was little, if any, way to obtain information. Nor was it easy to help residents who hadn’t evacuated, were trapped in their homes or wanted to know if loved ones were safe or still had their own homes.

To the rescue, along with first responders and state and federal agencies, came a previously untapped source of information and assistance: local Facebook sites operated by residents who wanted to provide their neighbors real-time news and assistance.

That included Bob “Weatherman” Burger, a Point Pleasant resident and former Island Heights police chief. Burger, who has been in the computer business since the 1970s, offered information, weather updates and help before, during and after Sandy via his Facebook page.

Justin Auciello’s Jersey Shore Hurricane News Facebook page, which now has 220,000 followers, is probably the most widely read of several citizen-journalist Facebook pages. The site began when Hurricane Irene hit in August 2011, and it later exploded with contributors and readers when Sandy struck the shore. Auciello’s story has been told before, but it bears repeating.

The Ocean County Police, Fire & EMS Facebook page  emerged in November 2012, shortly after Sandy struck. It describes itself as “the original and #1 source for breaking & real-time news in the Ocean County area from emergency radio transmissions and citizen reports.” Its mission: to get news to the public as it happens. The site has sister Facebook pages that serve Monmouth, Middlesex and Burlington counties.

Just before Sandy hit, the number of people on Bob Burger’s Facebook page surged to 5,000. Jersey Shore residents and those from out of state “liked” his page so they could keep tabs on shore conditions; another 1,200 were on a waiting list. He now has 14,417 followers.

Burger posted the following entry the day of the storm, Oct. 29, 2012: “Winds are going to start to build again now from the east … then sw later … this is not over … also there is a curfew in many towns including Point Boro … I will update everything … and getting some more info … is difficult become [because] many do not have internet or they don’t have elect[ricity] … And unfor when the cables are down there is no net … so they can’t get the info etc. … and I can’t get it from them … I am tethered off my droid phone. I will be back shortly with updates.”

A day later, October 30, when even Burger was affected by Sandy, he posted this: “I have very limited cell no net no power hope all doing ok i did say Impending Doom was coming hope to be back so be safe my friends God Bless.”

Burger said he uses software called Hurrevac (short for “Hurricane Evacuation”), plus a dozen other programs, to prepare his weather reports. About a week before Sandy hit, Burger — who works and consults for a federal government agency that allows him access to detailed information about the weather because it can affect his work — had supplied some 200 emergency personnel with Hurrevac so they would have real-time information about the storm.

“Severe storms, Hurricanes etc. I have a vast amount of resources and equipment available to predict and track storms and any weather very accurately. I will post all severe weather that will impact NJ,” Burger says on his page. He has been involved with the computer industry since 1974 and is certified by Microsoft, IBM and Sun Microsystems as an engineer and systems developer.

Moreover, for the past two years Burger has used his Facebook page for his other role: gathering toy and gift card donations at Christmas for Sandy-affected families.

Justin Auciello is an urban planner and digital journalist who grew up in the South Seaside Park section of Berkeley. Auciello, who as a youngster was known to hop on his bike and follow fire trucks whenever he heard the whistle blow, had also launched his Facebook- and Twitter-based news platform before Irene struck. When Sandy slammed into the shore, he was ready.

Auciello’s round-the-clock efforts to link those seeking rescue from their flooded homes with rescuers were lauded by the White House, which recognized Jersey Shore Hurricane News on its Champions of Change page.

The role of social media, including Auciello’s Jersey Shore Hurricane News, during Sandy was also the subject of a 17-minute documentary created by Elizabeth Herlihy. “Sandy: A Social Media Storm” can be viewed here.

The Ocean County Police, Fire & EMS pages are operated by a group of about 20 volunteers, none of whom wanted their full names disclosed to the public, said Kevin, a Freehold area resident who is among the founders of the page and does private IT work.

“We gather our information from emergency radio transmissions, citizen reports and reports from agencies within the counties we serve,” he said. “We try to weed out the garbage and confirm the information before we post it. We see it as a tool to help the public.”

Ralph Stocco, a “confidential aide” to Toms River Police Department Chief Mitch Little, said the sites operated by Burger and Auciello, and others — including Ocean County Police, Fire & EMS — had been helpful to the public and emergency workers before, during and after the storm.

“They were great ways to get the news out to the public quickly, and they continue to be,” he said.

“That whole concept of only using traditional media, like newspapers and radio and television stations, has changed. In the past, if we wanted to find someone who [had] committed a crime, we’d give a Wanted poster to News 12 NJ, the Asbury Park Press, [and] the Star-Ledger, among others,” Stocco said.

“Now we treat the other nontraditional online sites, including Ocean County Police, Fire & EMS, the way we’d treat a beat reporter or a breaking news reporter,” he said.

Stocco said his police department relies on Kevin’s site and the sites operated by Burger and Auciello to share information.

“It’s a way for us to get information out there quickly. In the past, the relationship between a police department and the media was more reactionary,” he said. “We can get the facts or stories posted online within 15 minutes, and that’s what the public expects: daily information in a timely fashion.”

The social media outlets haven’t focused on reporting weather events and crime alone. Auciello said he crowdsources, and when he asks the public to tell him about a community event, he often gets 50 responses.

“This is the future of media. I think media needs to continue to be more democratized and accessible,” he said. “There has been a major paradigm shift, and a lot of it relates to the advent of social media.”

Much information is being produced rapidly, and people want to consume it immediately,” said Auciello, who has participated in many programs and training sessions for citizen journalists.

Previous: For the New Year, Entrepreneurs and Academics Offer One Piece of Advice to NJ Startups
Next: Startups, Investors Give Thumbs Up to Hatch NJ Hoboken “Speed Dating” Event