Home » News » Startups, Investors Give Thumbs Up to Hatch NJ Hoboken “Speed Dating” Event
[This was NJTechWeekly.com‘s third most popular article so far this year.  We are reposting it while we are on vacation.] 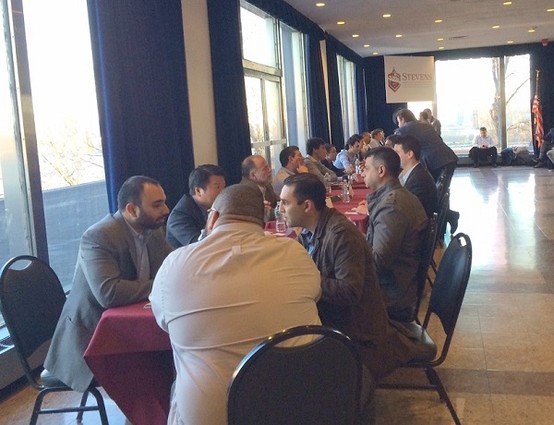 At Hatch NJ more than 125 startups, most of them from New Jersey, participated in nearly 500 five-minute meetings with 25 investors.

The event, also called Hatch Match Hoboken, took place April 24, 2014, at Stevens Institute of Technology (Hoboken). It was a collaboration between NJ Tech Meetup and The Hatchery (New York), a venture collaboration forum.

It was the first time this event had been held in New Jersey, and NJ Tech Meetup organizer Aaron Price said it had gone so well that the group plans to make it an annual event.

The doors opened at 5 p.m. for the startups, who signed up for various time slots with the investors. They had been given the investor list ahead of time and were told to hone their pitches.

NJTechWeekly.com interviewed a number of the participants at this event. Almost everyone was enthusiastic about the opportunities it had presented. Startups that had secured meetings with their target investors were very happy to have gotten those relationships going. 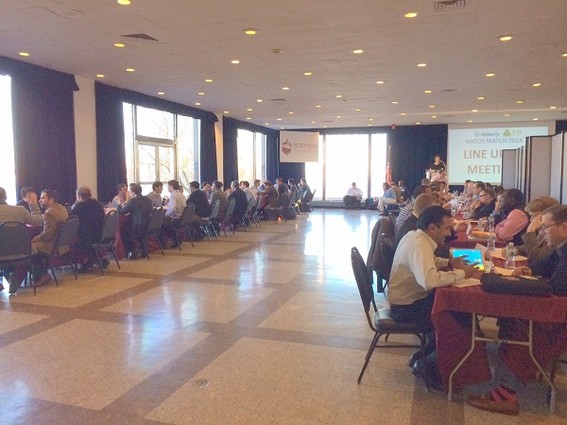 The investors we spoke with also expressed satisfaction with their experiences.

Ron Adams of NextStage Capital (Audubon, Pa.) said the event was a “super-effective opportunity to see a broad range of companies and business models in a compact time period” and called it “a great source of deal flow for an early-stage investor such as NextStage.” He added that he was impressed by most of the entrepreneurs and their ability to convey the core of their business within such a short time frame.

Jonathan Hakakian of SoundBoard Angel Fund (Morristown) told us it was impressive to see “such a vibrant room full of local entrepreneurs.” He added, “The New Jersey entrepreneurial landscape has come a long way. It was great to be in the middle of such creativity and passion.”

Wearing his Casabona Ventures (Kinnelon) hat, Mario Casabona, also CEO of TechLaunch (Clifton), said he appreciated the format and that there was no pressure unless the investor had a real interest in a candidate. He also noted that he saw companies from both New Jersey and New York.

Casabona added, “We had the ability to provide some feedback to the entrepreneurs as well as ask some questions to evaluate the opportunities. I was there to get a glimpse of future deal flow, and at the same time I took the opportunity to provide some feedback to make the companies more viable for investors. The entrepreneurs seemed open to suggestions.”

John Frankel of ff Venture Capital (NY and Hoboken) added, “Attending HatchNJ only strengthened ff Venture Capital’s conviction that New Jersey is becoming a thriving base for passionate entrepreneurs and innovative startups. We look forward to staying close to and supporting the New Jersey tech community.” 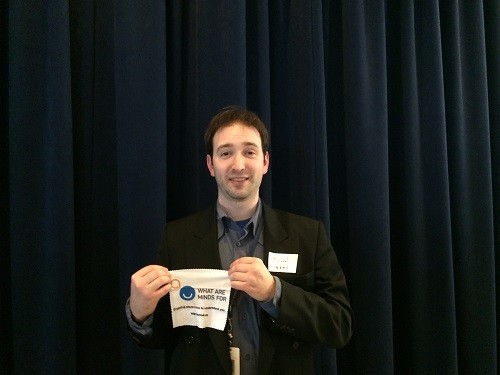 Michael Ligouri of What are Minds For had had one very successful meeting when we spoke to him. | Esther Surden

On the startup side, What Are Minds For (Newark) founder Michael Liguori said that during one of his meetings an investor offered to put him in touch with one of his portfolio companies that was a potential customer. Liguori’s product, Vognition, integrates natural-language voice controls with home automation and other equipment, such as thermostats.

Alex Romero of Hagtap (Jersey City) told us you have to treat these meetings like a first date. Hagtap is a “beautiful” app that aggregates nightlife events, telling users what nightlife is going on around them.

“You are not trying to get a big investment but … to get to know them and let them get a chance to know your company. Hopefully you get a couple of emails back,” he noted. Romero said he was selective in choosing the investors he wanted to talk to. 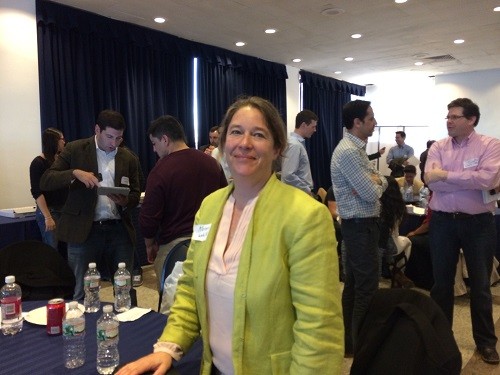 Karen Van Blarcum was looking for financing for WebXten, a High Bridge startup with a portal that lets business owners easily update or refresh their websites on the fly. “We also have a text-to-Web technology, so customers can place updates via text messaging into the website,” she said. Van Blarcum had had six meetings with investors on Thursday, and we spoke with her after she had completed several.

“The meetings have been excellent so far,” she said. “Everyone has been willing to offer advice and follow up … If we are not a right fit, they know someone who is, and they have offered to connect me to those people. Everyone just wants to reach out and help us succeed.”

Speaking after several investor meetings, founder Adam Michalski told us he had come to the event even though DormChat (New York) isn’t yet ready to raise funds. “We aren’t there yet, but developing those relationships [with investors] ahead of time is crucial. You don’t want to come knocking on the door later without laying a foundation. Start building relationships now, and once you do get traction and are ready to scale, you will have relationships and you can reach out to them.”

Glenn Jones of MessagePetz (Red Bank) told us his meeting with investors was “excellent. I was fortunate enough to meet with my No. 1 choice, who is also a father, and he understood our mission. He asked for our deck, which I will send him. It turns out that we live in the same town.” 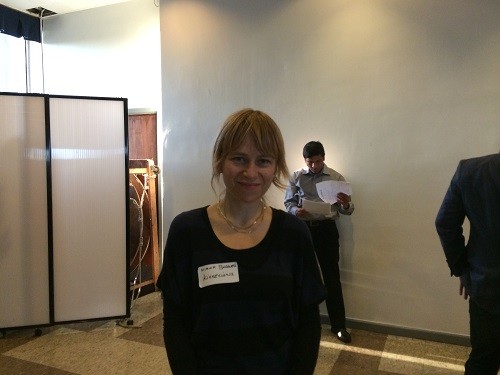 The founder of mentor-matching platform Idirus, Niamh Bushnell, said the investors had provided her Jersey City startup great feedback. She added that it was interesting to see all the investors from Philadelphia, whom she might not have thought to approach.

Bothsider founder Mark Gavagan said he had been very particular about whom to meet with, and the one meeting he had had so far had gone well. He said the investor had had insightful questions and offered to introduce him to someone whose startup had already gone down a similar road.

InControl Ads cofounder Don Nelson said this was his second Hatch event, and he called these kinds of matchmaking efforts “a great opportunity to get in front of investors, have some face time and get advice.” Nelson’s Morristown startup says it lets users create a secure, private profile to choose the brands and products they want to hear about through online ads. 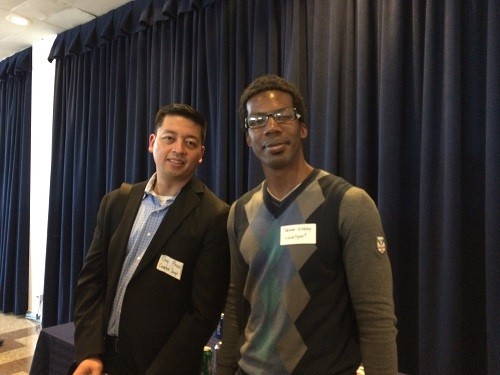 Guy Pineda, Creative Snap founder and Jason Webley of LivinSport both had good things to say about their meetings with investors. | Esther Surden

When we spoke with Jason Webley of LivinSport (Clifton), he said his meetings had gone well. “The investors are open and willing to help with information and guidance on how to get money.” He said he had been able to obtain meetings with the people he had wanted to connect with.

Dennis Harabin of Spudder (Somerville) noted that the event was all about getting the right investor as much as about having the right pitch. Once he was face-to-face with his target investor, the meeting went very well. Spudder supports fundraising for youth sports.

Creative Snap (Paramus) founder Guy Pineda talked to us about his online platform, launching later in 2014, which he says will help creative directors manage projects during their complete lifecycles. He had had three meetings when we spoke with him.

“Two of the investors didn’t seem interested. The idea was not for them. But at the last meeting the investor seemed interested in the concept and asked a lot of questions. Probably we’ll follow up with a meeting,” Pineda reported. 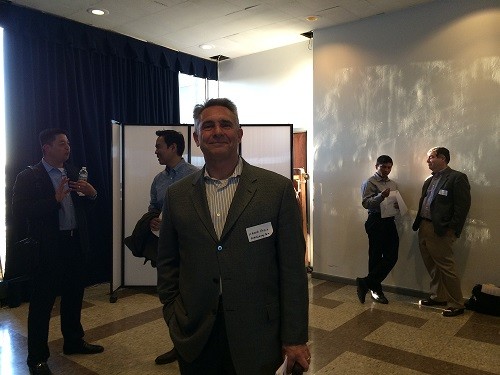 Fabricating.com’s Frank Russo said that his meetings had generated some interest from investors. | Esther Surden

Fabricating.com’s Frank Russo said his Hoboken company connects manufacturers who need custom-made parts with customers who need those parts in an online marketplace. “We have great customers in the state of New Jersey and a lot of contract manufacturing here,” he said.

“Our meetings went pretty well,” he noted, comparing this environment to other “speed-dating” investor events he’d been to. “It’s a little more spread out, and you can hear what the investors are saying to you … the most you can hope for in a five-minute pitch is to hear an investor say ‘Let’s talk more next week,’ and that’s what I [felt] encouraged to hear.”

Scott Barnett, founder of Bizyhood, is a serial entrepreneur whose previous ventures were in the enterprise software space. He described  Bizyhood as a virtual town square that provides tools for small businesses to connect with and have conversations with their customers online.

Barnett added, “We feel that investors need to be a strong partner for us and are not just dollars. In order to gain the same credibility and trust that I established in the enterprise software space, I wanted to start meeting potential investors and advisors now.”