When Ibrahim Mohamed was a teenager growing up in India, he went against his mother’s wishes that he pursue a career in medicine.

Instead, Mohamed, who enjoyed coding software at an early age, was determined to make a living in technology.

At the Princeton Tech Meetup session on August 14, Mohamed explained how his decision eventually led to working for some of the world’s largest tech companies.

“I have worked with great companies, but I’m not the most impressive guy,” Mohamed told a packed room.

He then noted that his career trajectory didn’t begin as smoothly as he might have hoped.

After a string of odd jobs, which included shoveling snow in the streets of New York, he left to attend the University of Arkansas (Fayetteville), where he earned a master’s degree in computer engineering. Not long afterward, Mohamed worked as a software developer at a Minneapolis consulting firm, but he was out of a job when his project ended.

Then Microsoft came into the picture.

During his interview at the tech giant, Mohamed was asked a series of questions that were structured to see how well job candidates could solve complex problems, rather than just answering interview questions correctly. Fortunately, Mohamed passed the test, and he spent the next 17 years working on various projects there, including Microsoft Office and Internet Explorer.

One of Mohamed’s fondest, but most challenging, moments in his career was being quizzed by Microsoft cofounder Bill Gates about a project his group was working on. “It was one of the toughest presentations that I’ve ever made,” he said.

Following his stint at Microsoft, he joined VMware, a Silicon Valley software company.

Mohamed jumped at the opportunity to work at VMware, which he said was in the “heart of tech.” But he soon noticed distinct cultural differences between this Silicon Valley software company and his former employer. One of them was VMware’s open work environment, where he didn’t have his own office, as he did at Microsoft.

After leaving VMware, he accepted a position with another Silicon Valley company, LinkedIn. Looking back on his time at that company, Mohamed recalled CEO Jeff Weiner as being a “hands-on leader,” and one of the best CEOs he had ever worked with.

Mohamed’s next step in his career journey took him to his current employer, Google.

At Google, Mohamed joined “an amazing culture” that encourages its 98,000-plus employees to share information with each other.

But landing one of those highly coveted tech jobs at Google requires more than a strong educational background and industry knowledge and experience.

Mohamed said that the company’s hiring managers also want candidates to possess out-of-the -box thinking, impressive leadership skills, and something called “googleyness,” which includes having emotional intelligence and other qualities that go beyond the typical job requirements.

Finally, Mohamed offered a few bits of wisdom to those seeking success in the tech field.

One of them was to strive to learn new things. He said those who resist breaking out of their comfort zone will be “doing a disservice to themselves.”

The Google tech professional added that the road to success in the tech industry requires the ability to embrace and inspire change. If you accomplish that, “you will see a brighter star ahead.”

23 More posts in computer science category
Recommended for you 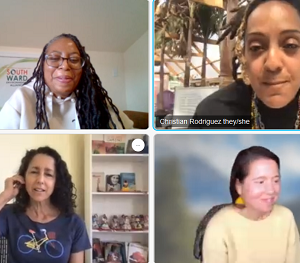