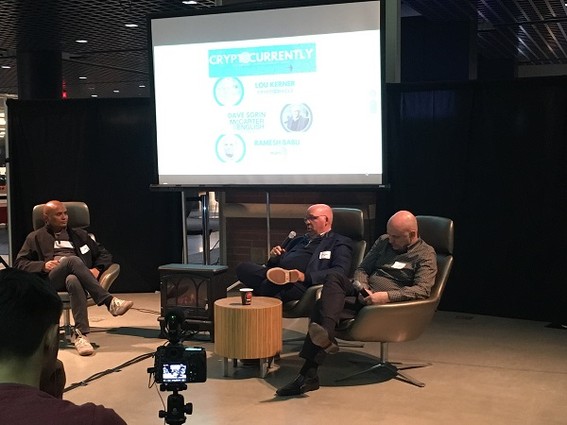 ICOs [initial coin offerings] and blockchain are on fire,” Ramesh Babu said confidently to the crowd at the Jersey City Tech Meetup at the Harborside Atrium in February.

Companies are developing their own digital money that can be traded freely online and offer greater liquidity to investors than traditional investments can. According to a report published by FabricVentures and TokenData, more than $5.6 billion of capital was raised through initial coin offerings in 2017, while traditional venture investments in blockchain startups raised only $1 billion during the same year. Initial coin offerings are quickly becoming a popular option for raising capital.

“What’s so disruptive or innovative about using ICOs as a funding mechanism? Are all the venture capitalists dead?” Babu asked.

Kerner describes the ICO and cryptocurrency phenomena as comprising “the world’s first legal global casino,” where anyone can gamble for a slice of the digital currency pie. “It’s the tokenization of private assets. Now, for the first time, if you’re a VC investing in a private company, you can trade in and out of it from a liquid, tokenized thing.”

There are two types of tokens: utility tokens, which give users access to products or services, and security tokens, which are used for investments of money (actually, of any kind of tradable asset). “Many of the coins being issued, and likely to have the most value, have utility underlying them. And they have the characteristic of a security, an investment vehicle,” Sorin explained. “ICOs are not an inexpensive transaction. They are technical, and to the extent that it is a security token, there is a morass of securities regulations that you have to comply with.”

Fraud and compliance have become concerns with regard to ICOs due to the laissez-faire nature of current regulations and securities laws. The Securities and Exchange Commission (SEC) issued a cease-and-desist order in December to a California-based company, Munchee, for unregistered securities offers and sales. The order signaled a trend towards a stricter regulationof ICOs, especially at the state level. In early March, New Jersey issued a cease-and-desist order to an IOC for selling unregistered securities.

Historically, raising capital has meant choosing between equity or debt, but ICOs can provide a viable third option. If a business owner offers coins in an ICO, there is no release of ownership, and the offering cannot be classified as debt because the money does not have to be paid back, as with a loan. In some respects, using an ICO to fund a startup is like a hybrid of equity and debt.

“It’s not equity, it’s not debt, but there certainly are obligations that the issuer has,” said Sorin. “You have to think about what the underlying financial model is of your company to determine whether or not a coin offering represents a viable capital-raising alternative for what you’re doing.”