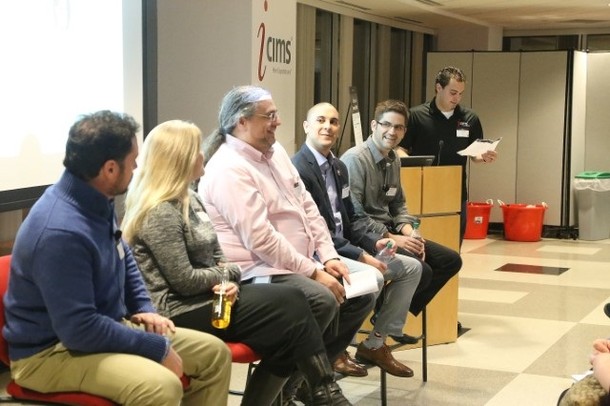 User experience (UX) is vitally important to the success of any software project. Yet it’s often not given enough of a company’s time or budget, said the panelists at a joint meeting sponsored by iCIMS, Cowerks (Asbury Park) and the Princeton Tech Meetup, on Feb. 10 at iCIMS headquarters, in Matawan.

Introducing the topic, Al Smith, vice president of technology at iCIMS, said that UX “is an area of great love and interest on my part. I have the belief that the history of software is littered with many companies that focus on the technology and not what the result of it was.

“I still believe there are a predominant number of software companies in the world that try to bolt user experience on at the end, along with things like performance testing and security testing.”

In response to a question from moderator Jim DelGaldo, senior business systems analyst at iCIMS, Di Sciullo took a stab at defining UX. He said that UX takes a holistic look at the online and off-line experiences that an end user or customer may be going through when he or she interacts with a product or system. “We used to look at it as the marriage of business, technology and user perspectives.”

UX extends beyond the actual app you’ve developed, said Fricovsky. In the case of BroadwayBox.com, it extends to the email his company sends out to confirm a purchase or to the ticket sent to the user in an envelope, and even to the weight of the envelope and the paper. It’s both online and off-line, he told the group. So when we are building a technical product, “even the developers should feel ownership of the user experience part.”

DelGaldo noted that the topic of UX has suddenly become hot, and he asked the panel why. Lehman remarked that the advent of touch interfaces and iOS has “changed the world when it comes to UX. Now people are trying to design what they want the user to experience, first.”

“Programmers don’t run the show when it comes to making software anymore,” he declared.

Looking at UX from a marketing perspective, Bifulco noted that a customer’s UX determines his or her perception of a brand. So a great experience has to be created from the very beginning, when a customer is still a prospect, she said. And it should continue all the way through to the development of a lifetime customer, which, of course, is the ultimate goal.

DelGaldo asked the group how they knew when they’ve succeeded. Diaz answered that you succeed when you have good processes in place and a budget to do the testing. You need a culture in your company in which the leaders believe in UX, speak about it and are champions of it, he added.

Lehman agreed that leadership and culture were most important. A company must want to make UX a major part of the process. “In most places, programmers are evaluated according to how fast they can send features out of the door. The thing that goes out the door might not always be the fastest or best piece of code,” or generate the best UX. He added that customers will be quick to let you know if you failed.

Once upon a time, people adapted their businesses and business processes to whatever software vendor they were committed to, as it was very expensive to switch after they had made that commitment, Lehman continued. But customers aren’t willing to accept that any more. Now, “if you don’t design so that people want to use your software, over time you’ll become less and less relevant.”

Bifulco urged the audience to become accustomed to measuring their UX results. A couple of the benefits of UX that can be measured are the reduction in help desk use and improved productivity on the customer side, she said.

“I know that the industry standard is that 10 percent of a project’s budget should be put against UX, but that doesn’t happen in most organizations. You are going to have to rely on return on investment models and understand benchmarking and look at the data. The data is there. It is not unquantifiable,” she said.

Once you create an experience, it is a living ongoing thing, Di Sciullo said. The best projects he’s been on were those for which the goals were established right up front, including the business case. “We set up benchmarks and said we are going to know we are successful because of that key performance metric we’ve achieved.”

Di Sciullo added that, while measuring the results of UX is important, the qualitative side is just as valuable as the data; and he urged the audience not to discount the anecdotal information that you get from UX testing. Doing ongoing sprints of user validation is important, he concluded.