Home » News » Inside Fusar’s Funding Round 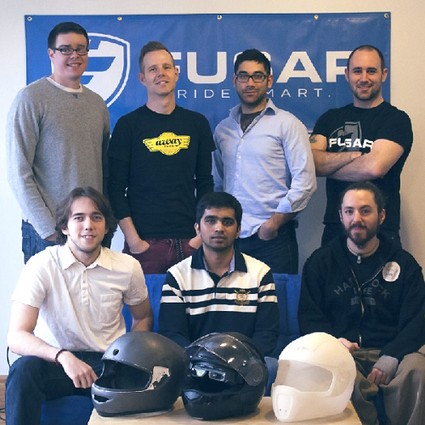 Fusar Technologies, the former TechLaunch company that is developing a smart, connected motorcycle helmet, raised $200K in a first tranche of funding last fall, and is in the process of raising its next round of funding.

The move to Jersey City has helped the company attract talent from New York, especially as the company is now located near the Grove Street PATH station, “but we are firmly committed to New Jersey. We were founded by a bunch of Jersey boys,” Shearman said.

In a conversation with NJTechWeekly.com about the upcoming funding round, Shearman offered up his experiences as a guide for other entrepreneurs.

He noted that Mario Casabona, CEO of TechLaunch, had made the initial contact with the Jumpstart New Jersey Angel Network, which led their first financing round. “We went through Demo Day, and then we got the ball rolling with fundraising immediately after,” he recalled.

“We were going back and forth with the Jumpstart Angels throughout the entire month of August because a number of them were out of town,” he said. “But we had the deal signed a couple weeks after they all returned in September.”

The Jumpstart New Jersey Angel Network invested most of the $200K, he noted, with the rest coming from non-jumpstart members, including a former tech industry executive and a pair of investment partners who had graduated from the same high school as Shearman, Patton and Rushing.

Shearman said his team met these investors through networking with other Bergen Catholic High School (Oradell) alumni.  “They were in our extended network. We pitched them over dinner, and they were fairly quick to get involved.”

Fusar has already attracted investors for their upcoming round, and the three cofounders are also exploring online equity crowdfunding platforms (e.g., SeedInvest) to try to top off the round.

“We’ve hit all of our first-tranche milestones, and we’re ready to ramp things up as soon as we close,” Shearman said, although he noted that the terms and details of the upcoming bridge round have not yet been finalized.

On the product side, Fusar has been busy prototyping their custom optical components and their new helmet shell. “We’re building out a really talented in-house development team, and the progress we’re making has exceeded our expectations,” Shearman said. He added that the startup has reached all its six product-development milestones.

Fusar has demonstrated its working prototypes for executives at a number of well-known helmet companies, and the cofounders believe that there is a future in serving as the “Intel Inside” of smart helmets. Fusar has even created a few bespoke prototypes for these potential partner companies, retrofitting the startup’s hardware to existing helmets. Whether or not a partnership comes out of these talks, the Fusar team is running full steam ahead on the development of their own product, and it’s scaling the product towards mass production.

On the hiring side, Fusar brought on another cofounder, Ryan Snelson, who has joined the team as director of UX. He has extensive experience in developing mobile products for companies such as Citymaps, Myspace and Google. Snelson, who has been riding motorcycles since he was a child, will focus on product strategy and design for wearable tech, mobile and social.  At a recent meetup, Shearman talked about the extreme vetting process Fusar undertook to see if Snelson would fit into the company’s culture, including  the team taking a long motorcycle ride with Snelson.

“We have also hired a new lead software developer, as well as a former motorcycle industry executive, who is taking the reins on business development and marketing, and we’re in the process of bringing on a CTO,” Shearman said. With several other part-timers on board, when the company is running full bore, there are eight people in the office, “and it’s a really exciting place to be.”

NJTechWeekly.com  asked Shearman why Fusar is going for an equity-based crowdfunding approach to fundraising for its bridge round going into its “A” round. “We really want to scale in 2015,” he answered. “We are viewing this as a product that has a huge growth opportunity. Having a crowdfunding campaign allows us to increase our exposure to interested investors, who are passionate about motorcycles and motor sports, beyond our extended networks. They’ll get excited about getting involved in what we believe is the future of motorcycle helmet technology.”

Shearman said that there have been some tremendous successes in crowdfunding, both rewards-based and equity-based, and he added that the “door for rewards-based crowdfunding is also open. That’s something we are considering as a means for financing production as the product nears completion.”

Shearman mentioned that negotiating with seasoned investors as a first-time entrepreneur can be daunting and intimidating. He offered this advice: “You don’t want angel investors who get too much into the weeds. Find angel investors who believe in the team and believe in the growth opportunity. You have to be wary of potential investors who want to pick apart the minor details of your financial model” because a model that projects sales three years out is going to change. “It’s too much to ask for at this stage.”

What you really need to convey, he said, is that you’ve thought about the important milestones and risks and associated costs. “We had to clearly show that we understood the challenges that were ahead of us, and that we knew how to react accordingly,” but spending time on minute details can “drag out negotiations and cause you to burn money while you are trying to close a round.”

Previous: Roselle Teens Get Day of Mentoring at AT&T in Bedminster
Next: Liberty Science Center and Jersey City Present Ambitious Plan for a Technology Campus