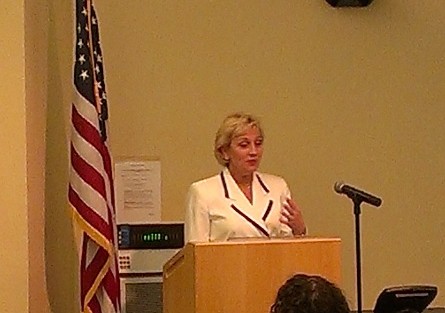 Recently, Lt. Gov. Kim Guadagno  headed a delegation of officials from the Partnership for Action, the Healthcare Institute of New Jersey (HINJ), BioNJ, several N.J. universities and more to the BIO International Convention in San Diego.

New Jersey is making its third appearance at the BIO International Convention, an important event for biotechnology. Last year, the convention brought together thousands of industry leaders from all around the world.

Choose New Jersey (a privately funded non-profit corporation founded in 2010 by the Christie administration ) collaborated with the delegation on a pavilion. The group’s slogan is “Big Ideas Happen Here.”

According to Tracye McDaniel, President and CEO of Choose New Jersey, there are more than 3,100 life science and “biopharma establishments” in the state.  Fourteen out of the twenty largest pharmaceutical companies are also located in New Jersey.

“With more scientists and engineers per square mile than anywhere else in the world, three medical schools among our 63 colleges and universities and 13 teaching hospitals, we offer biopharmaceutical companies a ‘brain belt’ second to none,” McDaniel said.

Lt. Governor Guadagno explained that BIO International is the best place to show what New Jersey is capable of and its “competitive advantages” to an international audience. She also said that New Jersey is focused on bringing business that will not only sustain economic growth, but encourage it in the biopharmaceutical sector that is already flourishing in the Garden State.

Previous: V3 | Grow Your Value, Voice and Volume in the Digital Age: How to Engage Customers on Social Media
Next: At Israel Showcase, Fulop Makes Case for Tech Companies to Go to Jersey City