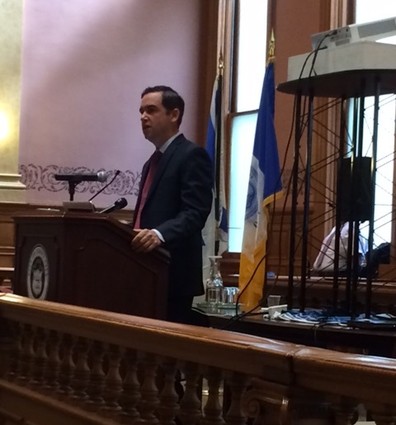 On June 23, 2014, a group of startups with ties to Israel went to Jersey City to pitch their wares at the first Israel Technology Showcase held there. Some of the startups had New Jersey ties or were planning to enter the Garden State’s marketplace sometime soon.

According to a spokeswoman, there are more than 300 tech startups with ties to Israel in the tri-state area.

Mayor Steven Fulop touted Jersey City’s uniqueness at the showcase, which was held in the city hall. “Our biggest asset bar none is that we are one of the most diverse cities in this entire country,” he said.

“At the same time, it’s been a huge benefit to New Jersey,” he continued. “There are more than 40 companies that have affiliates here from Israel and virtually the same number from Israel that are headquartered here in New Jersey. There is a little over $750 million in trade between Israel and the state of New Jersey.”

Ambassador Ido Aharoni, the consul general of Israel in New York, touted Israel’s culture of innovation and creativity, saying it is his country’s “competitive edge.” He said Israel is trying to get the word out in the United States about its startups. “The eight companies you will see here today were handpicked” to highlight that creativity, said Aharoni.

Aaron Price is the startup entrepreneur and NJ Tech Meetup founder whose group, with its more than 3,600 members, is the largest tech community in the state. He told the Jersey City audience that the Garden State plays an important role in the global tech economy. “Technology entrepreneurship knows no borders, no religion, no race … It is merely the will and determination to bring a product or service to life, and the ambition to make that happen, that will be rewarded with success.”

In an article in NJ Jewish News by Robert Wiener, Mark Levenson, chair of the New Jersey-Israel Commission, said, “We have many ways to provide incentives” for Israeli companies of all sorts that wish to set up shop in New Jersey. “We believe New Jersey is the destination place for any Israeli company that wants to headquarter its operations in the U.S.”

Acknowledging that many entrepreneurs are focusing more on establishing a base in New York than in New Jersey, Levenson told NJ Jewish News that “everything is a challenge. We need to sell New Jersey and show these companies why New Jersey is a better place to be. We need to provide them with better financial incentives.”

Eight startups that have tech development efforts in Israel and are mostly from New York presented their wares at the showcase.

The app CUPS, presented by Gilad Rotem, cofounder of the company by the same name, seemed to be an audience favorite. A mobile app that connects coffee drinkers and independent coffee shops, CUPS can be thought of as a sort of Starbucks card for coffee shops that compete with Starbucks. Users can walk into a participating independent coffee shop anywhere and use the app. The team is located in New York and Israel.

The other apps that presented:

Cellolo, which is still in stealth mode and is based primarily in the Netherlands and Israel, is developing a set of disruptive technologies for live events. The firm says these technologies enable a new form of dialogue between crowds and their favorite artist or sports team. Beyoncé is a seed investor in and an early adopter of the startup. Cellolo’s technology pitch was made by Tom Ben-Yehuda, CEO and founder, and Aaron Cohen, product evangelist.

Farmigo (Brooklyn and San Francisco) says it is creating a farm-to-neighborhood movement that makes fresh products convenient and affordable in communities across America. Benzi Ronen, founder and CEO, presented at the showcase.

Gett, which was started in Tel Aviv, has developed an app to hail black cars. Available in many cities, it has expanded to New York. Gett is a division of GetTaxi, which works in other cities as a taxi app, said Justine Karp, the firm’s social and community manager. The company says it offers 100 percent fixed, transparent pricing and 24/7 live customer service.

Pango lets drivers pay for parking on the street and at parking garages and use their phones as remote control devices to open gates. Neil Edwards, president, said Pango already operates in 60 cities around the world.

AppCard offers brick-and-mortar retailers a way to make real-time, item-level data actionable. It says it does this without requiring integration with the point of sale to drive customer retention and loyalty. For consumers, it’s aimed at being a one-stop shop to enter rewards and offers and to organize receipts, substituting for multiple loyalty apps. VP Eran Harel presented for the company.

LoyalBlocks (Tel Aviv and New York) has created a loyalty-based marketing platform for local businesses, offering automatically triggered communication between merchants and customers, according to Michael Thau, who spoke on behalf of the company.