Home » News » Is the Game Design and Development Industry Heading to New Jersey? 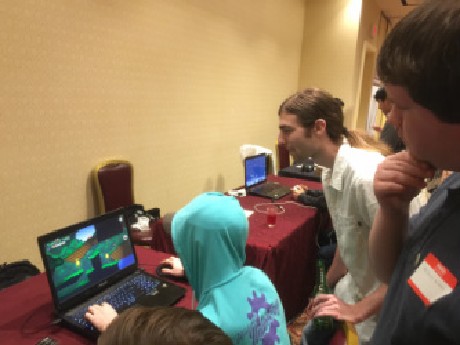 The event gave independent developers in the Northeast a way to to get the word out about themselves and their companies. | Gamecon.com website

The International Game Developers Association (IGDA) is reestablishing its New Jersey chapter, with a view to developing an independent game community here.

This news was announced at the IGDA’s New Jersey Revitalization Summit, in Atlantic City at the Tropicana on June 4. Several members of the Launch NJ Art and Tech Collective went to Atlantic City for the meeting.

NJTechWeekly.com spoke to Ray Rivera, an organizer of the meetup group. The event, which attracted close to 60 independent developers and designers, was held in collaboration with a new game-industry conference called Gameacon, which  is headed to New Jersey in November.

“Gameacon” stands for “Game Arts Conference.”  It’s a festival that helps artists involved in game creation by providing them with a space to showcase their latest work, making it possible for them to reach an appreciative audience.

The Gameacon website explains that “there are other festivals, but they are corporate, in big cities, and far away where it is expensive to stay, eat and get around.  This festival is grass roots so as to foster those independent, risk-takers who will be the new voices in game creation.

“It will allow fans to experience new games, interact and learn from their creators, to meet others who share their passion for gaming; and to celebrate the creativity and artistry that goes into development by awarding the most awesome game creators of 2015.”

The June 4 meeting, a lead-up to Gameacon, included discussions, presentations and tables where groups showcased the games they were working on. Service providers were also present, including a woman who worked in the game industry as an audio engineer for sound effects and background music. And some recent graduates demoed work they had completed for their capstone projects at school, according to Rivera.

In addition, some developers presented pieces they hoped to get to market through the different online outlets for game distribution. “There was a variety of talent there,” Rivera said.

A meetup group member known as “Juan” said about the summit, “I didn’t have a high expectation, just because New Jersey doesn’t really have a game developer community established, but this event exceeded my expectations and gives me hope for a better future for developers.”

During the event, three members from Impeller Studios discussed a game they were working on called “Starfighter,” which is in the pre-alpha prototype stage.  They discussed the scientific accuracy of the game, as well as their Kickstarter campaign, which didn’t get funded.  Their goal was $250,000, and they ended up “90 percent there.” Rivera later said, “They are still going to continue working on the game, however. It’s a team of 40 people all across the world, and some are in New Jersey.”

The November Gameacon event will include exhibits on art and game design, as well as discussion panels, tournaments, and even a movie for attendees at the Tropicana’s new IMAX theater. And the board-game area will include an art gallery, said Rivera.

The Arts and Tech Collective is a part of LaunchNJ, the vision of New Jersey entrepreneur Carlos Abad. Rivera told us that he was working closely with Abad and Bloomfield College to build the art and tech community in New Jersey.

According to the Bloomfield College website, several members of the faculty at the school have a close relationship with the Northern New Jersey chapter of the IGDA. The college offers a major in game development in its Creative Arts and Tech department.

Abad, a big supporter of New Jersey entrepreneurs, spoke at the Gameacon event in Atlantic City. He found the audience to be full of passionate tech professionals who took game development very seriously. “The founders of Gameacon are great,” he told NJTechWeekly.com.  “LaunchNJ is looking forward to partnering with them on future events.”

More information about this event can be found on the Gameacon blog.