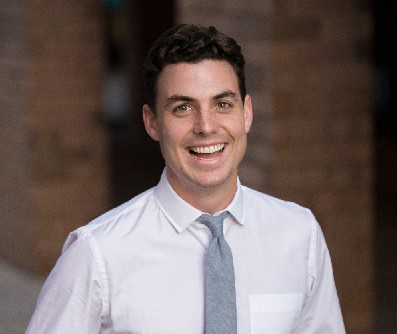 When Jarrett  Bauer was in college, his grandmother — who had recently been in the hospital — needed to be readmitted rather quickly. That started Bauer thinking about hospital readmissions and why they happen.

Later, Bauer looked at the Affordable Care Act and thought it might present an opportunity for him.

The ACA has a penalty for readmissions within a certain time frame. After calling hospital CFOs to confirm that readmissions were a real problem, Bauer realized that, not only were they a problem, there was as yet no solution.

Bauer is the cofounder and CEO of Health Recovery Solutions (Hoboken), and he was interviewed about his startup and entrepreneurial experiences at a meeting sponsored by the NJ Tech Council. The meeting took place on Sept. 26 at Jet.com headquarters, in Hoboken. David Powell, program director at Mission 50 Coworking (Hoboken), conducted the interview and moderated questions from the audience.

HRS supplies home care agencies with a remote monitoring platform focused on changing patient behavior to reduce readmissions and improve clinical outcomes. HRS software works on a tablet and tracks medication, vital signs and wound integrity. It also interfaces with electronic medical records (EMRs).  There is a cost per tablet, and the software is offered as a subscription service. The data stored on the tablet is wiped after the patient is discharged, and then reused for a new patient.  At a cost of $3.00/day, hospitals and agencies can avoid a $15,000 fine for readmission by using HRS services, Bauer said.

He recalled that while still in college, he started an “idea wall,” and for about a year all he did was stick notes on the wall.  After that year of coming up with ideas, he and his team started to develop a product. They then proved that it worked clinically in a randomized study, and started selling it.

While still working on his MBA, Bauer realized that he “had to just go for it” and devote himself fully to the development of his product.  By demonstrating that his product was viable, he was able to get into the Blueprint Health accelerator, in New York City, which specializes in supporting health tech startups. The accelerator gave the company funding and office space in exchange for a 6 percent investment.

Up to that time, the company had been self-funded, and Bauer was living in his parent’s house, in New Jersey.  By committing himself fully to his project, he was able to get others on his team to commit themselves to the project without taking salaries for the first three years.  Later, he noted, when sales were good, it was easy for the company to raise capital.

When Bauer was asked how he had picked his team, he responded that he “knew himself.”  He knew what he was good at and what he wanted to do. He then made a list of everyone he knew, and picked three friends who were good in technology and operations, as well as passionate about his product.

One of his choices was Rohan Udeshi as COO. He said, “I knew Rohan Udeshi. He loved and thrived in operations management. I knew he was perfect for COO.”  Daniel Priece, who has a bachelor’s and master’s degree in computer science from Villanova University and is a great team player, was chosen for software development.

In Bauer’s opinion, “it is better to have a good team with a bad idea than a bad team with a good idea because they can always figure out what to do and what to sell.”

He also spoke about achieving a balance between what he repeatedly referred to as “discovery skills” and “delivery skills.”  He alluded to discovery skills as the inventive trait, the ability to come up with ideas and be a software developer.  Delivery skills are more down to earth: sales, marketing and day-to-day operations.

Powell asked Bauer’s opinion on having followers (e.g., on Twitter) versus making sales.  Bauer responded, “The company needs cash.  You have a user base.  So, what?  Money is most important.”  Also, Bauer stressed the importance for startups of having a good pitch deck.

HRS moved from upper Bergen County to Hoboken, and is now a multimillion-dollar company with 30 employees.

Previous: At the NJBIA 2017 Summit, a Look at How Innovation Gets Done, Part 2
Next: Verizon Makes Case for Small Cells as Building Blocks to 5G at Demonstration in Warren