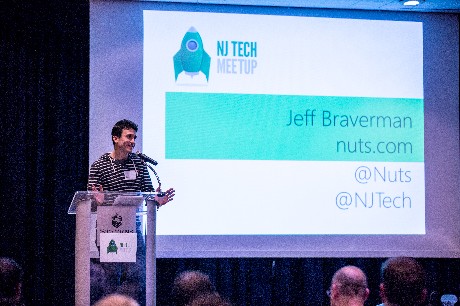 What’s in a name? Or, rather, what’s in a memorable domain name? Jeffrey Braverman has learned the answer and more as the CEO of Nuts.com.

At the NJ Tech Meetup on Jan. 12, Braverman spoke about how he grew his family’s decades-old nut shop into a multimillion-dollar online brand.

Braverman’s grandfather Sol started the Newark Nut Company in a storefront on Mulberry Street in 1929. He later handed the business to his two sons: Sandy and Jeffrey’s father, Kenny. Jeffrey grew up working at the store, and when he was a freshman at the University of Pennsylvania, in 1999, he got the idea of building a website for it.

“I thought, you can buy whatever you want online, maybe people will buy nuts online,” he said. Braverman registered the domain “NutsOnline.com,” having to go with his seventh choice of name because the first six were claimed by, ahem, another kind of business.

After graduating with a business degree, Braverman put the site aside and went to work as an investment banker at Blackstone, but he left within a year.

Despite being only 22 — the same age his grandfather was when he founded the nut shop — and already making more money as a banker than his father, Braverman dove into the family business. His family welcomed him, even though they thought the move was a little strange. “I used to wear a suit and was working at one of the most prestigious investment banks, and suddenly I’m going into a little retail nut shop,” Braverman said. “You just have to be very humble and just dig in.”

He wanted to avoid taking money away from his father and uncle, so he agreed to work for half of any increased profits, plus a token ten percent of the overall business. He started talking to customers, employees, suppliers and other people involved with the business. And he started to push online sales.

Braverman redesigned the website and, when it went live in December 2003, sales increased a lot, perhaps too much for such a small company. But he was ready. “My dad said, ‘Shut it off,’ and by that time I had the confidence to say, ‘No dad, go home, we got that.’”

His father and uncle were used to running the business in a traditional way, so Braverman assured them about the new tools he was using. “It can be interesting working with families,” he said, citing a role reversal from the typical family business with an older head. “I assumed authority and leadership just by showing I had different capabilities than my family. I remember telling my father to get QuickBooks, and my father thought it was too much money, and I said, ‘Dad, it’s $300, we’re buying QuickBooks.’”

During the mid-2000s, Braverman began to rely on Google to follow customer trends and act accordingly. If Oprah Winfrey mentioned a certain type of nut or seed on her television show, Braverman made sure the business carried it.

He has also been focusing on branding. For instance, the packages have a very memorable design with quirky cartoons. “You wouldn’t believe how much feedback we get,” he said about the packaging. “It resonates with customers. They remember you.”

As part of that branding, Braverman realized that he really needed to shorten the “NutsOnline.com” name. “I always wondered, as things get more and more competitive, about the long-term viability. Is this brand good enough? Does it translate to selling other products?” Braverman said.

He did his research, and found that the owner of “nuts.com” lived in Guam and made millions manipulating traffic from generic domain names. Around 2008, Braverman offered $200,000 for the name, and the man refused. Braverman was taken aback. He then negotiated an arrangement that enabled him to redirect searches for nuts to the online store, but complications arose because the name was still tied to that, ahem, other type of business.

Braverman relented, but after a few more years he resumed his pursuit. “I thought, what if we could get one more percent customer retention,” he said. “And what if a competitor bought this?” By 2012, the man in Guam was more willing to sell, and Braverman paid $700,000 after some  messy negotiations. “You never want to make two moves in a row, and I made seven or so moves in a row,” he said. “Finally, we pulled it off.”

Braverman estimates that the new name paid for itself within six months, and that the increased sales resulting from the change to “Nuts.com” have totaled $15 million.

Indeed, the business has grown dramatically since “Poppy” Sol first opened his shop. Nuts.com moved out of its original Newark storefront, and will soon occupy over 100,000 square feet of warehouse space in Cranford. It has grown from selling walnuts to passersby on Mulberry Street to selling 3,000 products like organic spirulina powder to health nuts as far away as Modesto, California (“health nut” pun unintended).

Braverman has since bought out his father (who, he said, is now enjoying life), and runs the business with his cousin David and 100 employees. He remembers his taxing days when he was first starting out, and this past December he worked again in the warehouse to help process holiday orders.

“We built this business constantly like it was a startup, very frugal, very lean, and for me doing lots of things myself,” he said. “But that was good because it kept me disciplined.”

He still wants to grow the business, but it’s already strong enough to afford him some time to relax.

“The greatest thing about this is the freedom,” he said. “I still work very hard, but I leave at 5 p.m. consistently, and get to spend time with my family. It’s a really beautiful thing when you can work on your own terms.”