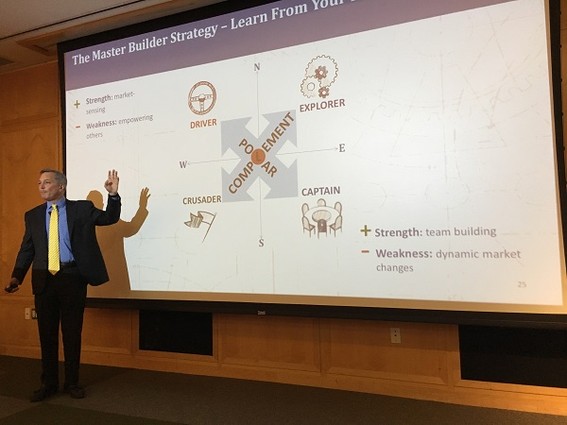 Chris Kuenne, the Princeton University lecturer who sold digital marketing agency Rosetta (Hamilton) for nearly $600 million in 2011, came to the Princeton Tech Meetup two weeks ago to talk about entrepreneurship and his new book, Built for Growth: How Builder Personality Shapes Your Business, Your Team, and Your Ability to Win, which he wrote with John Danner.

The book maintains that there are only four types of successful entrepreneurs: Drivers, Explorers, Crusaders and Captains. Each personality type will build a business in a “profoundly different way,” Kuenne said.

Understanding your personality type can help you choose a “co-builder” or an effective team to overcome the problems your particular personality type typically runs into. In the early days, each one of these types aspires to a customer portfolio that is different from that of the others, Kuenne said. Also, it turns out that, depending on which type you are, you will work better with different “financial sponsors” or investors.

The Princeton Tech Meetup now has more than 5,000 members. More than 100 tech entrepreneurs, developers and others came to hear Kuenne speak at the Princeton Public Library, which hosts these monthly meetings.

Kuenne said the book came out of conversations with Danner, senior fellow, Haas School of Business, University of California Berkeley, who also teaches at Princeton. They wanted to know how certain entrepreneurs build businesses that grow. They wanted to understand how these entrepreneurs think, how they are wired and what decisions they typically make.

“One of the really neat things about being a quasi-academic is we could ask these questions and test our hypothesis. What we found is who you are and how you are wired as a person shapes how and why you build your company.”

After posing hundreds of questions to a sample of 450 successful entrepreneurs, the authors narrowed the resulting information down to four factors that determine the types of entrepreneurs who grow their companies. The researchers used personality clustering econometric research that had been developed by Rosetta and Princeton University’s economics department.

Their conclusion was that “your motivation really matters. It matters why you want to be an entrepreneur. Your decision-making matters. Your management style and leadership style matter.”

They then developed a 10-question survey that entrepreneurs can take to find out which one of these personality types they are:

The Driver is epitomized by Steve Jobs, Kuenne said. Jobs saw himself as having been born to be an entrepreneur. His intuition was incredible. “The Driver is characterized by someone who can imagine customers’ needs even before he or she can articulate them,” Kuenne said. The Driver’s management style is directive and demanding, and the leadership style is results-focused. “It’s kind of tough to work for a Driver.”

Jeff Bezos falls into the Explorer category. “Explorers like to solve problems. They have what we describe as a ‘systems thinking orientation.’ They see this underlying system at play in everything,” Kuenne said. Explorers figure out the flaw in the system and build a better product. Their decision-making is clinical. They are very fact-based, as opposed to intuitive. And they attract and motivate like-minded souls, people who like really hard, complex things to figure out and master.

Larry Page, one of the founders of Google, is a Crusader. The informal motto of the Google founders was “do no evil,” and they took on the mission of organizing all the information in the planet for all time. Crusaders “are audacious. They are highly intuitive in their decision-making. They believe in leading people from a single and very clear mission articulated and lived each day.” They attract people who are also motivated by that mission.

The Captain is the classic leader. He or she unleashes the productive power of others. Kuenne used Jack Ma as his example here. “Jack Ma was an unemployed English teacher in China and had the idea for Alibaba, the largest e-commerce site in the world. He recruited 17 of his friends and colleagues to start Alibaba.” Ma refers to all of them as “cofounders” even though Alibaba was actually his idea, Kuenne said. Captains are dispassionate, he added. They are good at putting people in the right spots in the company and then holding them accountable. “They are direct, honest and consistent,” and when a Captain says ‘do this’ and you earn a bonus, he or she always delivers, Kuenne said. The Captain attracts people who find goals motivating.

Kuenne urged entrepreneurs to pay attention to their own personality types. If you chose a cofounder who is incompatible with you, you may have a divorce in business that is as painful or more painful than a marital divorce, he said. “Our findings suggest that knowing your type and knowing the type of your co-builder can help you choose better.”  For example, a Driver has a hard time teaming up with anyone, but a Captain pairs very well with pretty much everybody.