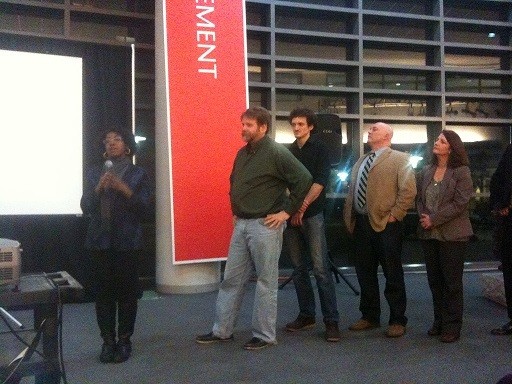 Some of the participants line up for their chance to pitch at Lean Startup Machine Newark. | Esther Surden

Anyone wondering whether Newark has the potential to be a tech hub should have been in the New Jersey Institute of Technology (NJIT) Student Center Atrium the weekend of March 1 to 3, 2013, where entrepreneurs with a spark of an idea tested their notions against lean methodology at  Lean Startup Machine Newark.

Spearheading this effort was Steven Royster of the New Jersey Economic Development Authority (EDA), who has close ties to Newark. Facilitating the three-day program was Lean Startup Machine operations manager Rafael Balbi, who attended this first-ever Newark event to guide participants through the program and help those who had signed up validate their ideas.

Guy Story, CTO of Audible, the Newark-based audio book company bought by Amazon.com, participated in a keynote fireside chat about his firm and its technology challenges. Dr. Randall Pinkett came to the Sunday awards portion of the event to announce the winners of his Campus Innovation Challenge 2013.

At the opening event on Friday night, Balbi addressed the participants, noting, “I’m the founder of not just one but two failed startups, so I definitely feel your pain.” He is driven, he said, to help others jump over the chasms he’s jumped into.

Balbi prepped the startups for their grueling weekend, explaining some of the principles of Lean Startup, a set of methodologies for transforming ideas into viable products using the least amount of time and resources.

Using the example of how companies present new products on QVC, Balbi noted that QVC merchants sometimes promote a product that has not yet been produced and sit back, waiting for the calls to come in. If not enough do come in, they call everyone back to say, “Sorry, we’re not going to build out this product.”

“Think of how much better that is than hiring a lawyer, hiring an accountant and figuring out the logistics … They can test it very, very quickly and efficiently to see if there will be customers for the product.”

Customer development is about being fast and inexpensive, and “it is not market research,” Balbi said. It’s not about sitting down and writing a business plan. It’s literally about getting outside and finding people who have a problem and are seeking a solution, he said. “They are waiting for you to build something amazing for them.”

To win the Lean Newark weekend, entrepreneurs had to accumulate — through evidence — the most real-world customer validation. They had to come up with “hard-core cash,” email sign-ups or letters of interest from companies willing to buy the product.

During the first part of the process, participants were put on the spot to pitch their ideas in a very short one-minute format. The ideas were then voted on in what might be considered a chaotic but efficient process. Teams had to have at least two members to be viable. The initial ideas:

Mark Annett’s idea was Snackbuilder, little “Lego sets” that children could use to assemble cookies and snacks into cars and other objects.

Another pitched project — A Dame’s Game — involved creating a Web-based community venue for women to discuss sports. Said its hopeful founder Xenia Murray, in sports men relate to statistics and money, while women connect emotionally to the sport and the people playing it.

Another idea, Raw End from Andrew Saada, takes end-of-life components from production lines and households and reimagines them as novel limited-edition products that change according to the availability of excess parts from various sources.

Charlie Szrom of Need to Know said he wanted to create a marketplace for critical information. He described it as a combination of Quora and TaskRabbit.

Nicole Singletary of It Takes a Village pitched an ambitious product that deals with the problem of low-level ex-convict recidivism.

David Reeth presented Generation Rental, an idea for a marketplace through which to rent generators during hurricanes and power outages.

Darrell Fertakos of Boundless Innovations pitched his idea for Idea Guard, a mobile app that would let inventors like him file the paperwork for patents and trademarks directly from their phones when they have an idea. His idea stems from new U.S. regulations that shift the filing burden to inventors. In general, to obtain patents now, it doesn’t matter whether inventors are the first to invent the product; all that matters is that they be the first to file.

Wanda Reynolds proposed an Internet show in which guests get together to talk about how to entertain while a chef whips up a delicious meal in the background. A moderator would direct the conversation. Reynolds envisioned this as a reference point for people who like to entertain.

Iyea Brandy suggested Pint Sized Playdates, a way to use the Web to make play dates for children that is aimed especially at parents new to an area. The website would arrange play dates during enrichment activities.

(Part Two of this article will cover more of the Lean Newark event.)