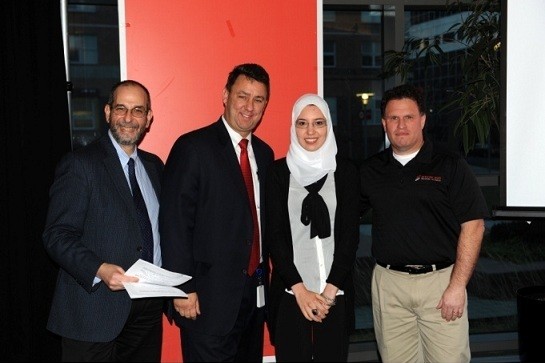 Back on Nov. 30, 2012, NJTechWeekly.com visited the New Jersey Institute of Technology (NJIT) for the Newark Innovation Acceleration Challenge.

There, several NJIT students and Newark-area community members pitched practical, innovative ideas — mostly in the life sciences and medical device arena — to a panel of judges made up of angel investors, industry insiders and bankers.

The prizes at stake: a $3,000 summer fellowship that pays the winners to work on their ideas at the NJIT Enterprise Development Center, and mentoring by Capital One Bank, which was a hands-on competition sponsor. Michael Ehrlich, the assistant professor of finance who helped found and organize this event, said the summer program, a 12-week lean startup accelerator, “will get you quickly on your feet and to your go-to-market” point.

Some 37 teams applied for the program, and 14 made it to the final round to pitch their business plans to the judges. This was the first year the competition involved members of the wider Newark community, not just students.

According to Richard Schnapper of Capital One Bank, the bank was “blown away” by the innovation they witnessed that day. Capital One gets involved in these events to gain hands-on experience mentoring future companies, to impart some financial knowledge and to give back, said Gregory Smith, a Capital One senior vice president based in Edison.

A new event sponsor, Dan Sterling of Sterling Medical Devices (Rochelle Park), said he found the presentations very innovative. He said he greatly respects the student’s ability to invent a totally new product, adding that his firm is innovative when it comes to engineering processes and services, and “there is a great deal of innovation in bringing products to market,” so he knows innovation when he sees it.

Sterling’s firm helps clients develop their medical devices and get them to market. He works with both large companies, like Johnson & Johnson, and very small ones just getting off the ground, he said.

“We’ve helped early-stage startups with grant applications, doing things like providing letters of support,” noted Sterling. The firm also provides free analysis to help create a project plan that helps young companies understand the costs and regulatory hurdles they might run into. Sterling has worked with businesses that have websites and apps in the medical device category. Sometimes the company acts as an angel to partially fund a startup that has an idea it believes will scale.

Winners of this year’s competition were primarily in the medical device and life sciences areas, and several winners are women. All the student winners are from NJIT’s Albert Dorman Honors College, Ehrlich noted, and had participated in a mentoring program there called Interdisciplinary Design Studio.

Student Amira Esseghir of Princeton represented her team, which won for the company’s development of an autism spectrum disorder treatment device, a toy called AutisMind.

Ellika Salari of Livingston gave a demo of her team’s swimming sensor, called Swim Safe, a wristband that lets lifeguards locate ocean swimmers in trouble within a mere few seconds, while there is still time to save them.

Margaret Christian of Lake Hopatcong demonstrated an alternative way to perform heart valve surgery with a device that permits multiple stitches, safely speeding the procedure. Because the device can reduce surgery time, it may reduce complications from such operations and save money by using less operating room time.

Another winner, Isaac Daudelin of Independence, presented a painless needle, which many of the judges found exciting. Daudelin said during his presentation that parents would be willing to pay for a solution that would eliminate pain when their children get immunizations and have blood tests.

Community winners included Dean and Cheryl Allen-Munley of Tewksbury (both NJIT alumni), whose product, Bandbox Helmet Hat, is a bicycle helmet composed of super impact-resistant foam. The twist: the helmet is concealed under a “stylish” hat. Another community member winner, Caron White of Newark, presented her company, SAHSHE, which offers a subscription service for beauty product samples.

Speaking briefly to the students was Randal Pinkett, founder, chairman and CEO of BCT Partners (Newark) and a past winner on the television show “The Apprentice.” He congratulated the students and community members for their accomplishments  and introduced his Campus CEO Challenge business plan competition (deadline: Feb. 16, 2013).

“I expect to see an application from all of you,” Pinkett told the students. “Why? Because I have money, too. We are giving a minimum of $7,000 to the winners and the runners-up,” he explained. He added that his company has “a great track record with this competition of providing resources, mentorship and other forms of support” to those with entrepreneurial aspirations.

UPDATE:  Two of the NJIT team winners, TouchCare, which developed the painless needle and Safer Surgery Solutions, which developed the technigue that will reduce the time for heart valve repair, won at a second contest sponsored by Capital One bank called the Cross-Campus Business Competition. TouchCare, in fact, won the top place at that event. In a Huffington Post article Safer Surgery Solutions’ Margaret Christian said she will use her addition prize money to make a prototype of her device. Isaac Daudelin, who represented TouchCare, told Katie Elder of NJ Biz tht the additional prize will help get the group towards the next stage of field testing.