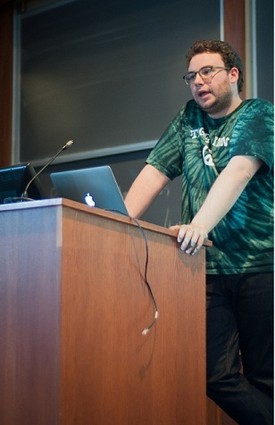 Some of the brightest young minds in New Jersey spent an entire week hacking ideas and forming potential new companies during Princeton University’s Hack Week 2013, from Jan. 27 to Feb. 2, 2013.

More than 80 students heard guest lectures by veteran entrepreneurs, and many formed teams to present their own startup ideas during Demo Day on Saturday.

The Princeton Entrepreneurship Club organized Hack Week. According to junior and computer science major Momchil Tomov, this was the club’s first official Hack Week. It had previously hosted weekend hackathons and a weeklong event last year, though without the Hack Week name. He said last year’s event prompted the club to plan a bigger, more organized one this year.

Tomov explained that the club wanted to give students more time to work on their startup ideas. “The basic idea is that we want students to explore projects that could lead to startups in a more focused way,” he said. This year’s Hack Week was timed to coincide with Princeton’s winter break, allowing students to attend without worrying about their classes.

Tomov noted that the Entrepreneurship Club had awarded prizes as high as $1,500 during previous events, but it decided against doing so at this one. “Rather than prizes, we figured the main incentive is building a product, getting experience working in a team, getting a sample of what working on a startup would be like and seeing what other people are up to,” he said.

The club received support from Tigerlabs, an “entrepreneur campus” based in the town of Princeton that offers capital, advice and other resources to startups. Several of Tigerlabs’ leaders — including managing partner Bert Navarrete, who spoke about accelerators; Jason Glickman, venture partner and CEO of Princeton-based Connected Sports Ventures, who discussed raising capital; and program director James Smits, who covered pitch decks —made guest speeches during Hack Week.

Smits said Tigerlabs was eager to participate. “We thought it was a really good venue for student entrepreneurs to build something,” he said. “We really like when people are actually building products.”

Smits, himself a Princeton graduate, agreed with Tomov that Hack Week would give students time to practice outside class. “It lets the students forget about school for a moment and apply everything they’ve learned to a real-life application,” he said. “Hopefully it wasn’t too much like school.”

Smits said he had enjoyed acting as a mentor to the students. During his talk on pitch decks, he urged them to think about how they present their businesses. “As technical as you might be, you’re still one of the spokespersons for your company,” he noted.

More than 14 student teams presented their projects on Demo Day. They included groups that devised the following apps: Symba, which helps users make better decisions about what they eat based on what they’ve already consumed that day; Safety Ninja, an app that alerts authorities and close friends when a person is in danger; Pursuit of Mappyness, which notifies students of campus events and other information; and Am I a Freak?, which lets users compare their body parts to human averages.

Tomov said he hopes the students will continue to work on their projects and that the ideas evolve into something more. A group that participated in the event last year went on to form a company, Mapsaurus, that makes an app discovery engine for Android phones. The Am I a Freak? team has uploaded its app to the Google store.

“We’ve already had companies start out of this, and we think we can help a lot more,” noted Tomov.