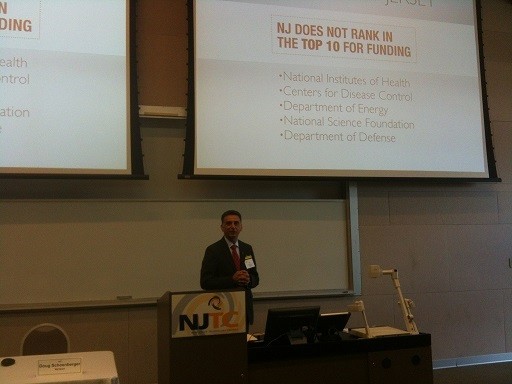 The keynote address by Ali Houshmand, who became Rowan’s seventh president in July 2012, discussed the need for change in higher education so students leave college with skills that match employer needs, especially important to the development of the N.J. tech industry.

Rowan is on the brink — the change will occur on July 1, 2013 — of becoming one of two N.J. comprehensive research universities, as classified by the state. The university will expand undergraduate, graduate and doctoral offerings and double enrollment within a decade, an article on the Rowan website noted. It is also in the process of hiring some 60 faculty members.

Higher education — which represents some 15 percent of the U.S. economy — is at a crossroads, Houshmand said, squeezed by high costs. “The only way forward that I can see for this segment of the economy to become transformed and much more relevant than it is today is to partner with industry,” he said.

To prepare for his presentation, Houshmand said he researched where N.J. stands economically. “By many measures we are a leader, we are in great shape,” he said, but “when it comes to collaboration between different segments, we are really bad.” So the question remains How can we leverage our great assets to create opportunity in the area of public-private partnerships?”

There are 60 some institutions of higher education in the state, Houshmand said, but they are not performing efficiently. “Are we producing the right people in the right fields that New Jersey and the country needs?” he asked.

At Rowan, 90 percent of the students are from N.J. “If I as president of this institution am creating 50 philosophers this year and the state can only absorb 10, what do I do with the rest?” he asked his audience. Maybe another state will absorb them. However, if other states don’t need the grads, “they stay here and underperform. They either do other jobs for which they have not been trained or they do not take advantage of their training.”

Rightsizing will be key to making colleges relevant, Houshmand asserted. He said that if he can triple his faculty and facilities, he can triple the number of highly sought-after engineering grads. He noted that he has had to turn down mechanical engineering applicants with SAT math and verbal scores of 1300.

Providing a story to support his contention that graduates in the STEM fields are in demand, he said Rowan is trying to hire 15 programmers to help it integrate the School of Osteopathic Medicine into the university but has had trouble finding them.

Houshmand discussed his own problem with beefing up Rowan’s faculty for the transition to research institution. Even if faculty are tenured elsewhere, the state still makes them wait two years to receive tenure here, he said.

“The damage that that policy alone does is monumental,” he said. “That means that we are depriving the state higher-education institutions of the greatest talents that are available.” It also means university presidents have to do a lot of arm twisting to recruit good people.

N.J. public institutions are penalized for seeking more out-of-country or out-of-state students, but those are the students who bring in income, Houshmand said. “Every other state goes out of its way to recruit talented students.” New Jersey, he pointed out, loses many of its own talented students to those states. Their parents send their money and their children out of state, and many students never return, he said.

“Why do we compartmentalize our institutions? If the schools have the resources to create [programs], if there are faculty members to teach [in them] and if there is demand, why on Earth won’t the state let them do that?”

Houshmand proposed a solution to the money crunch in New Jersey K-12 education.“Those of you who have had children go through 12th grade know that there is one party after another; nothing much else really happens, at a huge expense to the taxpayer.” The 12th grade can be eliminated so that students can move on to higher education and start becoming productive citizens earlier, he said.