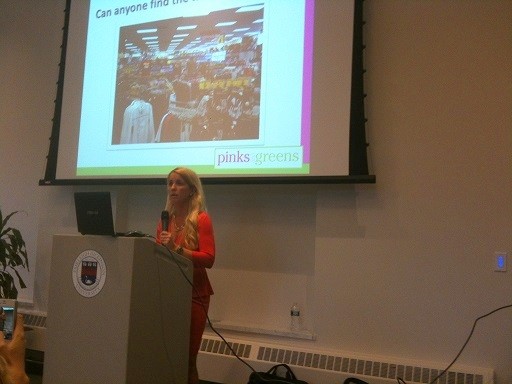 At the third Madison Tech Meetup, held on May 20, 2013 at the library on the Fairleigh Dickinson University (FDU) campus, two N.J. startups pitched. Also featured was Jonathan Rochelle, now a director at Google after his company — 2Web Technologies, which invented the cloud-based spreadsheet alternative XL2Web — was acquired by the search giant.

In this story, NJTechWeekly.com covers the startups. We will discuss Rochelle’s talk in a future article.

Madison Tech Meetup was established in March 2013 at the FDU Madison campus. Its organizers, Carlos Abad, Marc Baskin, Stephen Navazio, Timothy Connolly and Victoria Sacco, had noticed an increase in entrepreneurial activity in the Madison area but no regular meetups to serve the entrepreneurs. So they started one with the unofficial help of FDU’s Rothman Institute.

The meetup now has 255 members, some 70 of whom it routinely hosts at its gatherings. It recently spun off a women’s group, whose first meeting will be held on July 22, 2013. Abad said he would like to see other enterprises spin off from the original group, including specialty programming meetups and a coworking space. The meetup also sometimes holds meetings with another local group, the Chatham Technology Networking Group, organized by Johan Carini and John Buckman.

Up first at the podium at the May 20 meetup was Mark Annett, an entrepreneur with a hand in many startups and president of Livingston-based Annett Enterprises. Annett recently won Lean Startup Newark for his food product SnackBuilder. At this meetup he pitched another of his companies, TIPPS for Better Choices (“TIPPS” stands for Timely Interventions for People, Places and Situations).

Annett began by presenting compelling situations in which TIPPS would be appropriate, including a diabetic showing up at the franchise Rita’s Water Ice and an alcoholic entering a bar. In the latter scenario, the application could be programmed to remind users that they shouldn’t be there and to call their Alcoholics Anonymous sponsor. In the former example, users might be reminded not to eat anything sugary and to check their blood sugar regularly.

“It’s all about interventions for people who want to make better choices,” Annett said. For addicted gamblers, the app could notify users each time they enter a deli that sells lottery tickets to think twice before purchasing one. Annett said the app can even be programmed to flash a photo or a video of users’ children, making them consider what compulsive gambling could do to their family.

The company plans to give the app away but charge support providers — psychiatrists, social workers and nutritionists — a dollar a month so those professionals can be informed of how their patients are doing between visits. The system does not use geofencing, which costs a good deal due to data transfer and consumes too much battery power, Annett said. TIPPS only triggers a notification when users arrive at a known trouble spot, not if they merely drive by one, he added. Annett said he had filed for a patent for some of the intellectual property behind the app.

A video of Annett’s presentation is available here.

Up next at the podium was Allison Dorst, CEO and founder of Pinks and Greens (Florham Park), an online upscale specialty retailer of active wear for women passionate about golf, tennis and fitness. Dorst said she had started the company in her Manhattan apartment because she couldn’t find golf clothes online that she wanted to wear.

Current online outlets for sports clothing are very male-driven, Dorst noted, and “outfits are not their key objective … . Our key is an upscale motif that is collection-driven,” she said, and the site provides that high-end experience with a personal shopper, in-depth sizing information and the option of shopping by designer. “The theme we find with women is that they all want to look good no matter what they are doing,” she added.

Pinks and Greens wants to raise $850,000, which will be spent predominantly on sales and marketing, although some portion of that will go toward purchasing inventory. “We want to hire a developer and a buyer” as well, Dorst said. She expects the money will allow the company to arrive at the point at which, with some additional funds, it can scale and then be sold to a strategic partner.

Pinks and Greens updated its information as of Sept.24, 2013: Pinks and Greens wants to raise $1.2M, which will be spent predominantly on brick and mortar locations, sales and marketing, although some portion of that will go toward purchasing inventory. The company is now looking to hire a designer and buyer.

Dorst said the question that keeps her up at night is whether an established or well-funded retailer might decide to intrude on her niche. She noted that while nothing will stop a larger player from entering the market, by the time a retailer might want to compete with her company, Pinks and Greens will have had a six-year head start. For that reason, it would be easier for a sporting goods chain store, for example, to acquire her website than to start from scratch.