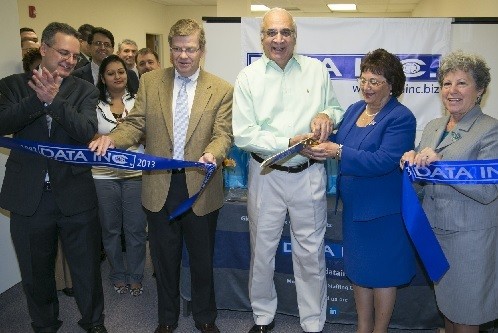 On Oct. 15, 2013, Montvale-based Data Inc. marked its 30th anniversary by adding an Edison location. The IT solutions provider, which has more than 800 employees worldwide, held an official ribbon-cutting to mark the occasion.

It was the first time the company, which has several international locations, chose to open a satellite office in the Garden State.

Data Inc. has expanded without any incentives from the state or the community, Arun Verma, CEO, told NJTechWeekly.com. The company said that with annual global revenue of more than $75 million, it is financially healthy and wants to expand to enhance its operations.

The Edison office began with 10 new hires, and Data Inc. expects it to grow further. The primary purpose of the office is recruitment of local programming talent to fill contract job needs.

In addition, the sales team will use the space as an on-the-way office.

By March 2014, Verma said, Data Inc. expects to have 20 application development personnel working in Edison. “The landlord has promised that there will be space for us to [further] expand,” he noted.

Conrad Leao, Data Inc.’s vice president for the Americas, said Edison had been chosen because it’s easy for tech talent living in New Jersey to get to the town, allowing the company to “eyeball them and evaluate them” better than through impersonal methods such as the Internet and email.

“That makes a difference in this business,” Leao said. “We don’t want to lose the human touch.”

Verma added that Edison’s position as a transportation hub is key. “You’ve got the rail network, buses and major highways all converging here,” making it easy for potential employees to commute to the office.

The Data Inc. expansion to Edison had been discussed just before the recession hit, and the company put those plans on hold until the economic forecast looked more promising, Verma said. Data Inc. reactivated the plans about six months before the grand opening, and it took several months to find and ready the office.

In making the decision, said Verma, “the other thing we looked at very closely was the availability of talent. This area seems to have a lot of the talent that is appropriate for our business.” People are attracted to the good schools in the area, he added.

Central New Jersey became a magnet for IT workers during the pre-Y2K era, when there was a huge increase in the number of jobs associated with updating computer systems to manage how computer programs would handle dates, he said.

Regarding the general economic climate in New Jersey, Verma said he believes it is continuing to improve, especially in the financial services sector.

He said the IT talent pool in the United States is largest in the New York metro area, noting that those individuals prefer to live in New Jersey.

In addition, Verma pointed out, many computer technology operations departments — Data Inc.’s clients — have left Manhattan. “If you remember, in the 80s every financial services company was located in downtown Manhattan, but gradually they moved out. The new areas where they are located are Jersey City and … Stamford, Connecticut,” he said.

Data Inc. plans to continue its domestic and international growth, Verma said, “We are looking at other expansion opportunities domestically, and that could be in North Carolina; Atlanta; Georgia; Chicago; and Lexington, Kentucky.”

The company’s international offices are in India (New Delhi and Bangalore), the U.K. and Switzerland. Plans are in the works for new locations in Brazil and the Asia-Pacific region.

At the opening ceremony, Verma thanked the attendees. He said that 30 years earlier he had had a dream and that he has accomplished more than he had expected to. He added that he had started Data Inc. in the basement of his home in Washington Township (Bergen County) and that the company has grown organically.

Joining the Data Inc. execs at the opening and ribbon-cutting were Barbara Roos, president of the Edison Chamber of Commerce; Edison Mayor Antonia Ricigliano; and Leo Mennitt, representing the New Jersey Technology Council.