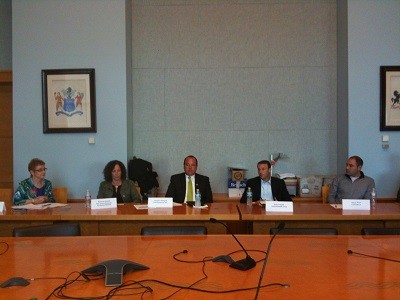 The United States Small Business Administration (SBA) Office of Advocacy went on a listening tour of the Philadelphia area and its environs — including Wilmington, Del., and Camden, N.J. — in September 2013 to engage those who are “growing the innovation economy” and starting, incubating and accelerating companies.

At the Camden meeting, held September 26, 2013, Judith Sheft, associate vice president for technology development at NJIT, hosted a panel of experts. It comprised leaders of New Jersey tech companies, innovators and other members of the tech community willing to identify roadblocks to success and make suggestions to the SBA.

The panelists focused on problems ranging from young companies’ lack of  knowledge of how to acquire Small Business Innovation Research (SBIR) and Small Business Technology Transfer (STTR) grants to microloan funding roadblocks to problems in between.

Sheft noted that she had decided to focus on IT and telecom because the technology sector is a key cluster in the state. In 2012 it accounted for 11 percent of all employment in New Jersey, she said.

Much time was spent discussing SBIR grants and how they could benefit startups and other tech companies. Getting certified to take on federal government contracts was also covered.

Rodriguez said he was a great proponent of acquiring “every certification our business needed to get” to be able to work with the federal government. “It’s an avenue that’s out there for you. It is cumbersome and tricky, but once you get the certifications, doors open … It’s like looking at [a] bull’s-eye. Every vendor is on the outer circle. As you get those certifications, you get closer to the bull’s-eye,” he said.

Sheft noted that companies at the EDC could benefit from more programs similar to the one Randy Harmon runs, which educates small businesses about the SBIR and SPTR programs and does bid matching for them. Those firms could also be assisted by funding to help them write proposals. The program demystifies the process and brings in SBIR program managers to discuss opportunities with participants.

An issue for startups that want to use SBIR grants is that they put much time and effort into writing very detailed proposals, only to find that money isn’t awarded until much later.

Price noted that a six-month lag time is “a lifetime” for a software tech startup. “There is always someone out there trying to advance a similar idea … if you have to wait six months, the bonus to your company is irrelevant.”

Tropper said he had used SBIR grants for some of his companies in the past, and that in his job at Rutgers he works with firms that use them. In his earlier days, a company of his had licensed technology from Stevens. “We had a long way to go before we understood it and we were not at all attractive to venture capital … We had someone come on board to write the first proposal. After that, we received about 15 SBIRs,” he noted.

Tropper recalled that using SBIRs also gave the company some ins when it wanted to partner with the government for prototype installations.

At Rutgers, SBIRs have proven useful to professors and students who need funding to proceed with their research, he said. They form an entity and apply for an SBIR grant. In another scenario, Tropper said, an existing company can use an SBIR grant to develop a new product or line of business.

Speaking on behalf of the SBA, Sargeant asked if any panelists were willing to provide a successful past grant application that didn’t contain proprietary information as a template a company new to the process could use. Some panelists were willing to do that, but others said they had spent too much money on either having specialists prepare the application or preparing it themselves.

Changing topics, Joe Benyola of UT&I, which employs 30 people in the Cherry Hill area, addressed barriers to innovation. He noted that there is rapid consolidation in his industry, which he believes is stifling innovation. Ten years ago, he said, he had had 15 competitors in New Jersey; now there are two. The rest have been bought by larger companies. UT&I doesn’t want to be bought, however. “When someone brings a problem to a big corporation, they tell them they can solve it in a year or two. We can say 30 days,” said Benyola.

The panelists also discussed barriers to entry through bundling of contracts. Bundling refers to the consolidation of two or more procurements into a single solicitation that a small business may be too small to pursue, so it gets squeezed out. Another barrier mentioned was first-year underbidding, through which companies take contracts at a loss for the first year, then raise prices thereafter.

A major barrier to the companies Zammit represents is access to capital. She said she is particularly interested in learning whether the SBA can do anything to free up capital from microlenders, including those it approves.

“One of the major roadblocks my companies see are in bank loans, even with the microlending program for startups,” she said. Banks advertise that they have loans available, but I send the companies out there and they always come back with nothing,” she said. These are companies with ongoing revenue that have collateral, Zammit noted. Sargeant said if companies are turned down by one microlender, they should try others on the list, which is on the SBA website.

A discussion on connecting students to companies through internships ensued, but many were skeptical that this could stop the outflow of students New Jersey experiences.

Price said he doesn’t believe companies follow dollars but that dollars follow companies. He added that the government can do a lot to provide the “cool factor” to make an area attractive to tech companies. “It’s not just a coincidence, in my opinion, that Bloomberg shows up at Foursquare and Twitter in the city to hold press conferences. To the extent that the state can do that kind of thing, it has a large impact on how the state is viewed. Students coming out of school think that the state actually cares about the technology sector,” he noted.

1790 More posts in News category
Recommended for you